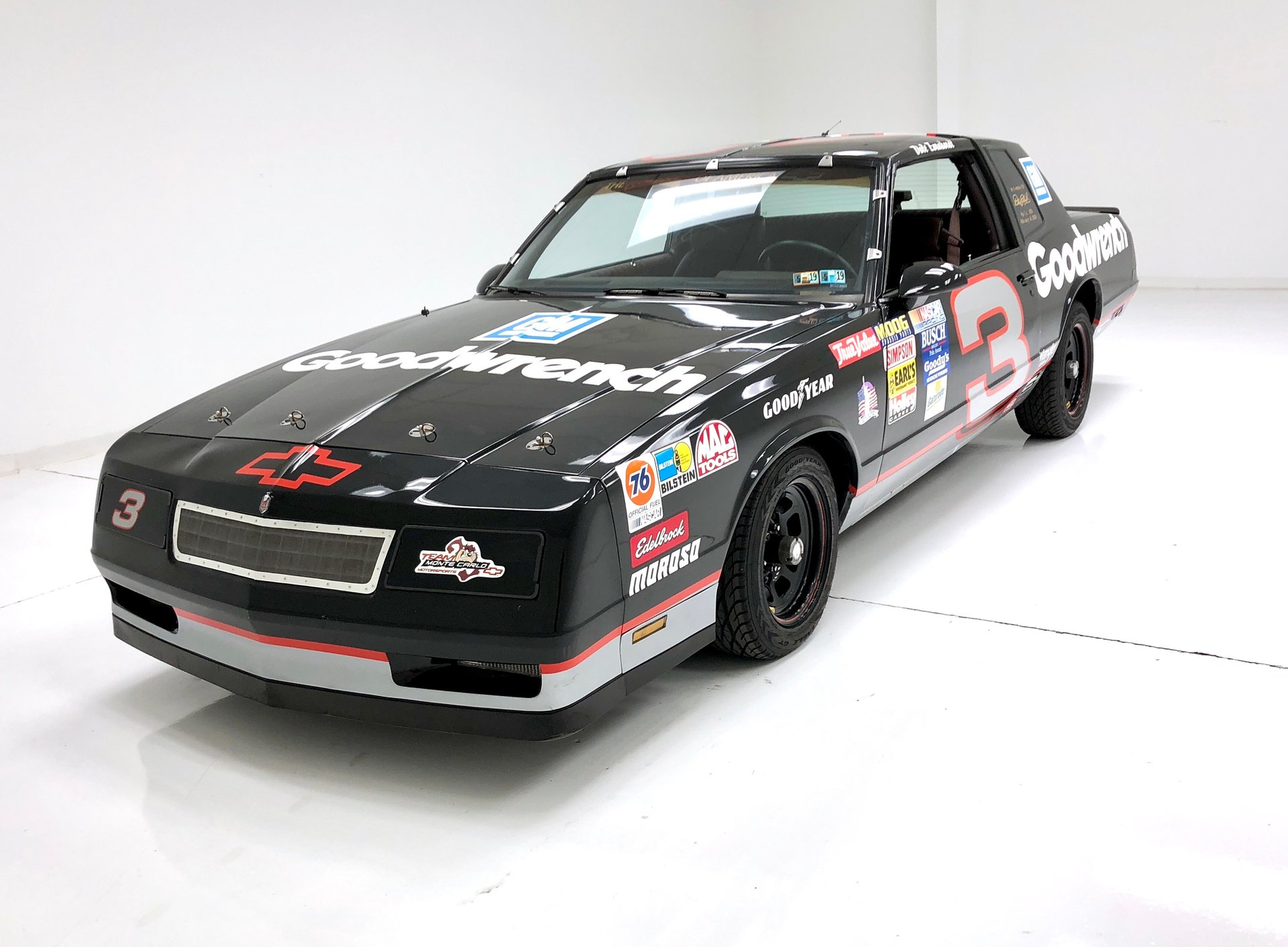 Regarded as one of the most significant drivers in NASCAR history, Dale Earnhardt won a total of 76 Winston Cup races over the course of his career, including the 1998 Daytona 500. He also earned seven NASCAR Winston Cup championships, tying for the most all-time with Richard Petty. This feat, accomplished in 1994, was not equaled again for 22 years until Jimmie Johnson in 2016. His aggressive driving style earned him the nicknames "The Intimidator", "The Man in Black", and "The Count of Monte Carlo". Also, his success at the restrictor plate tracks of Daytona and Talladega earned him the nickname, "Mr. Restrictor Plate".

What started its life as a typical 1987 Chevy Monte Carlo, has now ended up as a tribute car to the last phase of Earnhardts racing career from 1988 and up with Richard Childress Racing and sponsor Mr Goodwrench for GM.

With a nickname of “Intimidator” what could be a better color than black? This car painted black, uses that base color for a field of vinyl stickers to create the race car look. Emblazoned with the number 3, and Goodwrench, along with various other sponsors, this car creates a very close representation of the actual race car. Faux hood pins, and a decaled glass “T” top and NASCAR racing style wheels, bring it close to the actual car, but street legal and family friendly. The front grille has been made much smaller with a screened opening for better aerodynamics. The same could be said for the headlights, as they too are covered with a black plastic that smooths the line between the bumper and the hood.

Maroon crushed Velour with maroon vinyl bolsters are seen on the front buckets, and rear bench. A center console is sans the flip top, and the shifter is de laminating a bit on its sliding base. Factory air, along with power windows, power steering and power brakes, and power locks, as well as a toggle for the driver's mirror are the options that came with the original car. Some fading is seen on the door panels next to the window openings, but door panels are in otherwise good condition. Carpet appears in good condition, and carpeted floor mats are installed in front and rear of car.

A 305ci V-8 with a Rochester 4-barrel carburetor on top and attached 4-speed overdrive transmission throw power to the rear wheels via a 3.73:1 limited slip differential. This was standard setup for the 1987 Monte Carlo. A slight leak is seen from the underside which can be traced to the power steering reservoir.

Dale Earnhardt fans wake up and take notice! This tribute showing as the 1988 car Earnhardt produced as a memorial by the original owner, now for sale at Classic Auto Mall. Car runs smoothly, and could be a daily driver and head turner, as well as a photo op. car when you take it to a race.