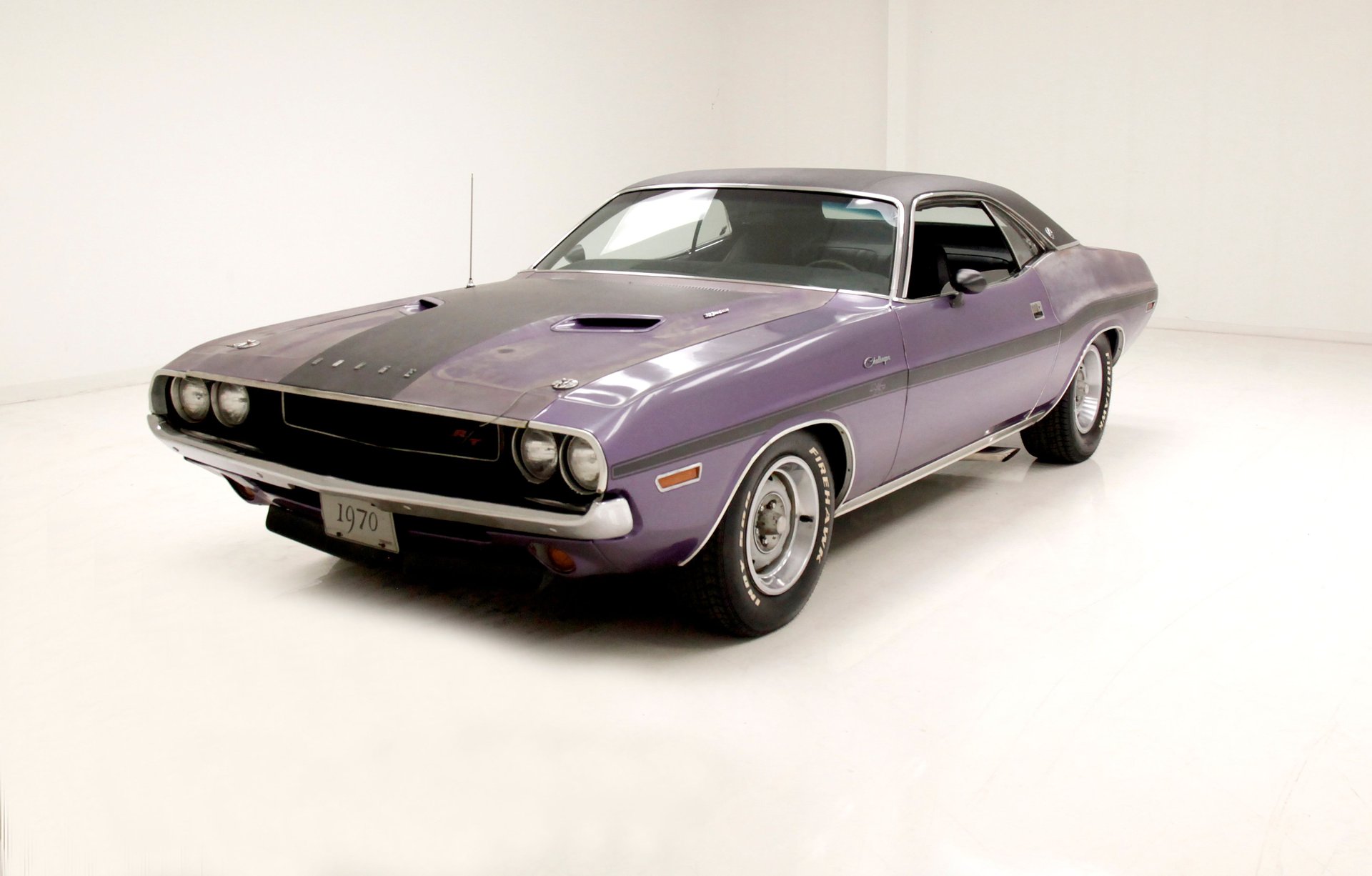 Introduced in fall 1969 for the 1970 model year, the Challenger was one of two Chrysler E-body cars, the other being the slightly smaller Plymouth Barracuda. Positioned to compete against the Mercury Cougar and Pontiac Firebird in the upper end of the pony car market segment, it was "a rather late response" to the Ford Mustang, which debuted in April 1964. Even so, Chrysler intended the new Challenger as the most potent pony car ever, and like the less expensive Barracuda, it was available in a staggering number of trim and option levels, and with virtually every engine in Chrysler's inventory.

For consignment, an original 1970 Challenger VIN tag SE, however it has the big block 383 V8, a changed out automatic transmission to the 4-speed manual transmission, the R/T stripe kit over faded plum crazy and other R/T add ons. She can be driven as is or you can take it to the next level which is a really nice aspect of this particular car.

Exterior
The coke bottle design can be seen at its finest with this car with bulging fenders and a straight door in the center with a thin front end and pinched long oval grille with dual headlights. Plum Crazy faded paint on mostly panels facing up to the weather, shows its thinning but no rust. An R/T black stripe kit has been added on, and the vinyl top went from white to black and sports the smaller SE rear window which is stamped from the very same machine that makes the R/T roofs, but a plastic insert is put in for the smaller rear glass, then covered with vinyl…ingenious! Dual scoops for the hood, nice chrome trimmings for the rocker and wheel wells and the window surrounds. Bumpers are nicely preserved and shiny, as are the hood pins and egg crate grille. The “Fratzog” badge on the vinyl roof gives the car the SE badge and speaking of badges some R/T badges have been put on the front grille and rear deck, as well as a black stripe running the length of the belt line with R/T knockout type. Also noted is that smaller rear glass indicative of the SE. Gray steel wheels are sporting deep dish trim rings which shine nicely and are wrapped by Indy Firehawk tires with raised white letters on all 4 corners.

Interior
A swing of the doors and we've turned on the way back machine, Peabody to 1970 where black molded vinyl and plastic form the panels for the doors. A wood centered appliqué denotes the Special Edition badge and cranks and handles as well as overall condition of the panels is very nicely preserved. The simplistic high back buckets and rear bench make up the seating, and this is black vinyl with some tuck and roll stitched areas throughout the seats. A wood rimmed original steering wheel fronts the dash which is also original in its looks and condition. A grouping of round gauges is within the dash front and an aftermarket tachometer is mounted on the steering wheel column. The original radio with an 8 track that actually works, and a rare 3-speed wiper option is on this car too. In front of the passenger hangs a trio of aftermarket gauges for water, volts and oil pressure monitoring. Faded original carpeting now more orange than black floods the floors and a tight black headliner hangs above. Lest I forget, a center console races rearward from the bottom of the dash on the hump and sports the angled wood handled Hurst shifter and a glovebox.

Drivetrain
Under the hood in the Plum Crazy painted engine bay sits a 383ci big block engine, with orange intake and valve covers. A dual scooped air cleaner cover covered with years of dust but still; sporting its original stickers is atop and filters air for a Holley 4-barrel carburetor. A 4-speed manual A833 circa Tuesday January 5th 1971 build is now replacing the original automatic. An 8-3/4 rear axle with 3.55 Suregrip is on the back and spins the rear tires.

Undercarriage
Appearing restored with nice black undercoating covering all surfaces with no rust or even road dirt. Some earlier chip off of a first coat of rustproofing has chipped off in some areas underneath the new coating, but it is very structurally sound under here. Drum brakes are all around, and a nice clean rust-free exhaust system snakes its way rearward from the engine attached headers. For the suspension, independent front torsion bars are on and for the back leaf springs.

Drive-Ability
This 383 big blocker fired right up, and ran smoothly. Wonderful acceleration and the manual transmission slipped smoothly into each corresponding gear. Handling was good, and a comfortable cruise can be had on the highway with this car. I noticed the wiper transmission has been disconnected.

Trim tagged an SE, however either a dealer employee or someone who had a thing for getting around higher insurance had this car built as an SE, then proceeded to put on all the trappings of the R/T. So, it's a mixture, and certainly looking original, with a snappy interior, and a solid drivetrain and under framing.