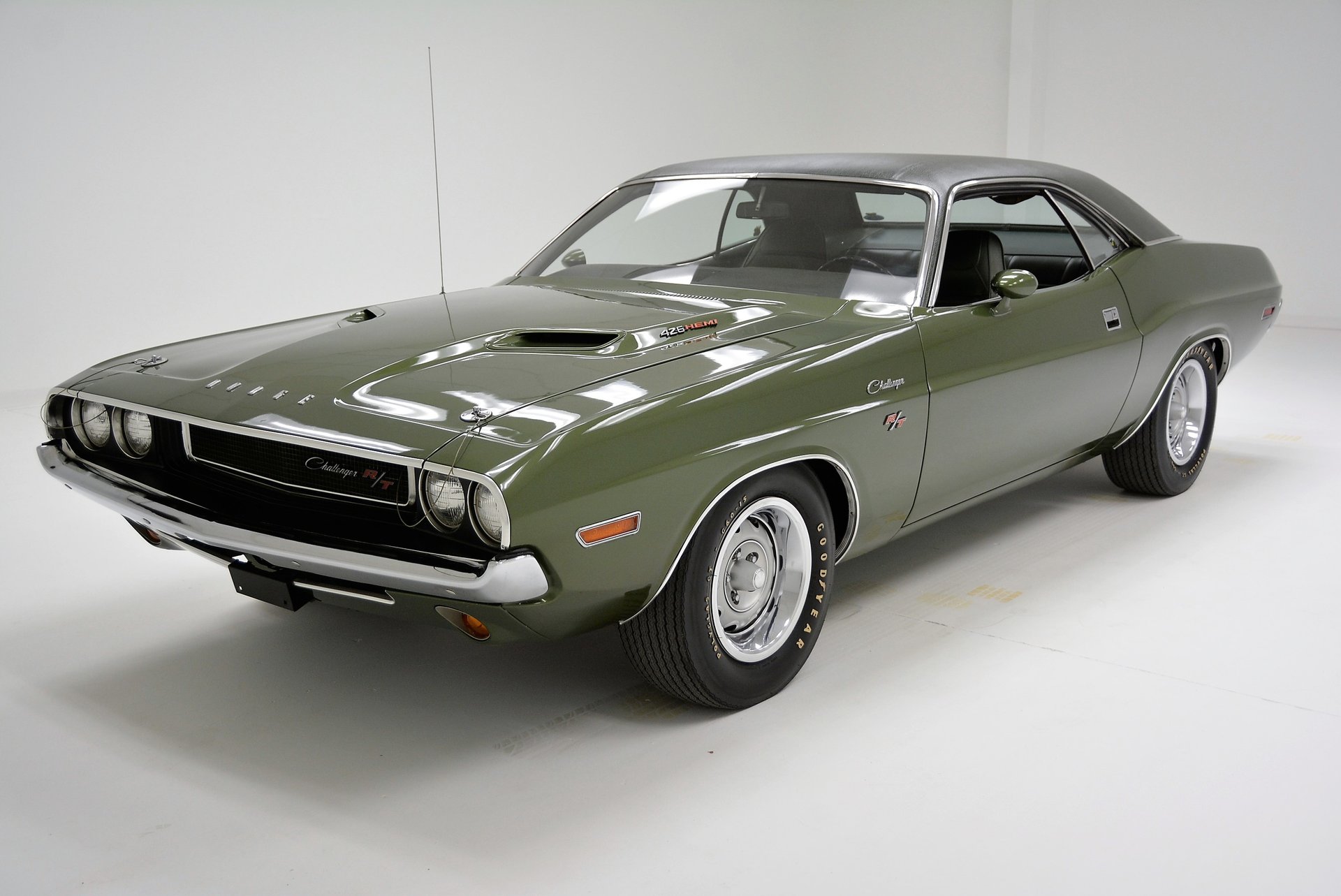 Although the Dodge Challenger was the last entrant in the pony car ranks of Detroit's Big Three, it arrived with something its competitors didn't have: the greatest range of powertrain choices in the industry, from the small but durable 225-cubic-inch “Slant Six” to the fearsome “Elephant Motor” — the 426 HEMI.
And although it lasted only five model years, the Dodge Challenger became one of the most storied muscle car nameplates in automotive history, with meticulously restored and rare examples today selling for six-figure prices.
1970
The Dodge Challenger made its debut in the fall of 1969 as a 1970 model. While it shared Chrysler's “E-body” short-deck, long-hood platform with the third-generation Plymouth Barracuda, Dodge Challenger's wheelbase was two-inches longer, creating more interior space.
The Dodge Challenger was originally offered as a two-door hardtop or convertible, in base, SE (Special Edition), R/T (Road/Track) and T/A (Trans-Am) trim. But it was the range of powertrain choices that was truly remarkable:
• 225-cubic-inch I-6; 145 horsepower
• 318-cubic-inch V-8; 230 horsepower
• 340-cubic-inch V-8; 275 horsepower (290 horsepower in the T/A)
• 383-cubic-inch V-8; 290 horsepower
• 383-cubic-inch V-8; 330 horsepower
• 383-cubic-inch V-8; 335 horsepower
• 426-cubic-inch HEMI V-8; 425 horsepower
• 440-cubic-inch V-8; 375 horsepower
• 440-cubic-inch V-8; 390 horsepower
Driveline choices for various engines included Chrysler's TorqueFlite automatic transmission and a three- or four-speed manual which could be equipped with a Hurst “pistol-grip” shifter. Big-block Challengers could be ordered with a heavy-duty Dana 60 differential equipped with limited-slip differential.
Even the paint schemes said “performance,” with colors including Plum Crazy and HEMI Orange, accented with “bumblebee” stripes. Customers could further customize their cars with twin-scooped hoods, “shaker” hoods, and rear deck wings.
Befitting the brand's performance heritage, the Dodge Challenger went racing in its first year. For the street, it was offered in the limited-edition T/A model to meet homologation requirements for Sports Car Club of America (SCCA) Trans-Am racing. The T/A was one of the first production vehicles to offer different size tires in the front and back; E60 x 15-inches front and G60 x 15-inches rear.
In 1970, Sam Posey drove the lone Trans-Am racing Challenger, prepared and run by Ray Caldwell's Autodynamics Race Shop. While he didn't win a race in the No. 77 car, Posey finished fourth overall in points.
Drag racers including Dick Landy and Ted Spehar also campaigned Challengers in the National Hot Rod Association's new Pro Stock class. In 1970 and 1971, the HEMI bIowered Challengers (and Plymouth 'Cudas) virtually ruled the class.
On the big screen, a 1970 Challenger R/T starred in the film Vanishing Point, a high-speed pursuit movie that has become a cult favorite with muscle-car fans. The movie was remade for television in 1997. Other 1970 Dodge Challengers have been seen in films including Used Cars, Natural Born Killers and Phantasm I and II; and in television shows including Mod Squad.
For the 1970 model year, just over 83,000 Dodge Challengers were sold.

Galen Govier certified.
Chrysler Registry certified.
1 of 137 built with 4-speed transmission.
Delivered through and modified by Mr. Norm's Grand Spaulding Dodge.
Copy of “not for street” addendum.
Fully restored to “like new” condition.