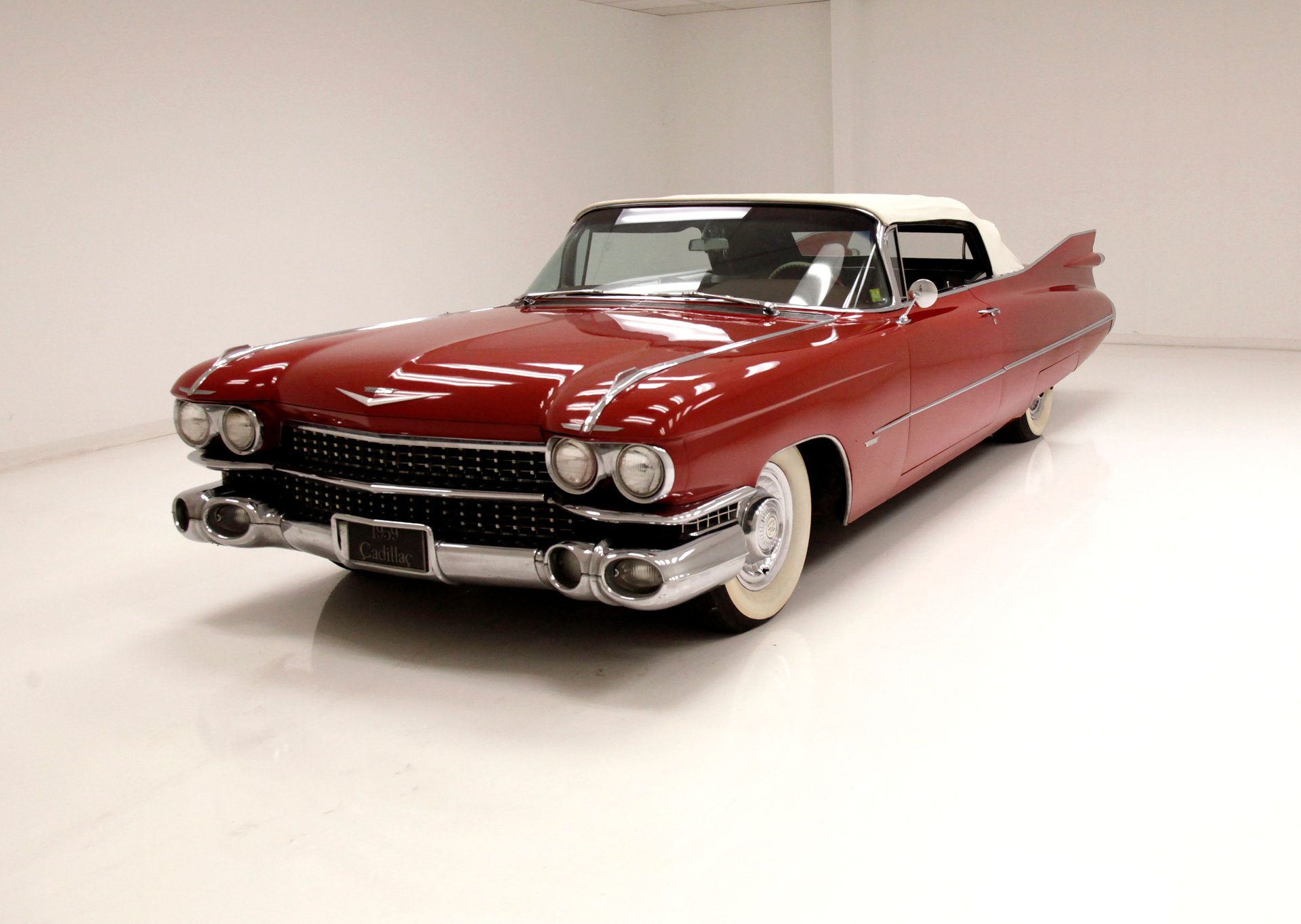 Long, low, and sleek…with an elegance all their own – the formidable “Standard of the World” ruled the road. Cadillac had them all running scared by introducing technology and advanced automotive design. As a luxury car, it was complete; its poised dignity was not an afterthought. Power, performance, and presence were the true hallmarks of the brand. Whatever one sought in a luxury car…Cadillac could provide. Luxury and elegance makes another cameo appearance…in the continuing saga of “As the Standard of the World Turns.”

The 1959 Cadillacs wore the tallest tail fins in the industry. The silhouette is unmistakably Cadillac. The 1959 Cadillacs were the most flamboyant in the history of the brand. They make this model year the most memorable and identifiable Cadillac. This was a Harley Earl design; he was the master of the motorcar. All of his designs were over the top. It is the two-door models that best showcase the fins…this made the car appear even longer, lower, and wider. Add on a convertible top and we have creme de la creme Caddy in our midst.

Exterior
Keeping in true 1950's mantra the larger the chrome and fins, the more it will sell, and this car holds the record for largest fins, and the massive chrome adornments are not too shabby either! Dual visored headlights with the rounded over trimmed visors almost appear to be snarling at you in their design. These flank a chromed egg crate grille with a mid wide chrome trimming, and then more egg crate below. At the bottom the front end is framed with a large mirror like chrome bumper with its large portholed lighting on either corner. The bumper wrap arounds start framing the wheel wells and ground the front quarter panels. A strip of chrome runs rearward from the headlights to the windscreen and highlights the edge of the front quarters. A raked rearward windswept windshield keeps the low and slow look, and the white canvas convertible top, in pristine condition, almost appears “chopped” from the side view. Big steel side slabs all draped in Seminole Red have decent gaps with slight sag in the doors. A below the belt line trim spear is rocketing rearward and just above on those iconic rear quarters are the piece-de-resistance, the Harley Earl magnum opus in the rear tail fins to this day yet to be outdone. These are topped with a chrome trimming and have dual pointed rocket nose taillights on top. As they melt input the rear roll pan, a large bumper takes over with a central egg crate filled in design and massive jet engine-like openings which have the reverse lighting in the center. Large steel for the hood and trunk, and rear fender skirts have this car looking more like a land rocket ship than a luxury car. Who said wretched excess is a bad thing?? It would be like someone saying I have too much money!

Interior
Top down and a swing of the doors and more excess can be sniffed out and create more eye candy. The door panels have a tango going on between the white vinyl and red vinyl with a cut in of red carpeting, and chrome trimmings and accenting badging. These trimmings are showing some dimpling and aging. Power windows are installed, and the door panels are pristine. Feasting our eyes on what we are about to sit on we see red leather tuck and roll stitched inserts with white bolsters and loads of buttons for the front and rear benches. The front bench sports an armrest in red surround and white edging. Chrome tubs with power adjustment controls cradle the front bench, all sitting in a red sea of beautiful clean carpeting. A futuristic styled GM dash with a central gauge speedo cluster and dual surrounding circles of encased metal controls is in front of a two toned red and white plastic covered steering wheel. Some more window toggles in the corners of the wrap around dash as well as the wiper and washer buttons just below are within easy reach of the pilot. The dash has a sentinel for the auto headlight dimming on top, cruise controls, climate controls, dual ash receptacles, a big glovebox, and plenty of shiny trimmings throughout. The convertible top is lined in black. This begs the question “I wonder what the poor people are doing right now??!”

Drivetrain
A heave of the long hood, and we see a restored and detailed engine bay with a correct 390ci V8 topped by a single 4-barrel Carter carburetor. A Hydramatic 4-speed automatic transmission is attached to the back, and 2.94 cruising rear axle is on this model. Engine bay is nicely patina covered and fairly clean but original.

Drive-ability
Started right up and I was off like a land rocket ship on a mission. She ran swimmingly, turned about 1000 heads, and all worked well as to the power controls. I noticed the speedometer is inoperable, and the horn does not work, but the car is large enough to coerce others to yield to such excess, and its red!

Harley Earl nailed the excess with the design of this Caddy.. In this writer's mind it is the best example of the Caddy bar none. Plenty of conveniences, plenty of chrome, and those tail fins with the quad rocket nose taillights on top, in just bleeds midcentury spaceship, pushbutton, pills for meals lifestyle. An awesome example, and I may have a hot nut for this as it's the year of my birth, although I'm not nearly as excessive but equally as high maintenance!