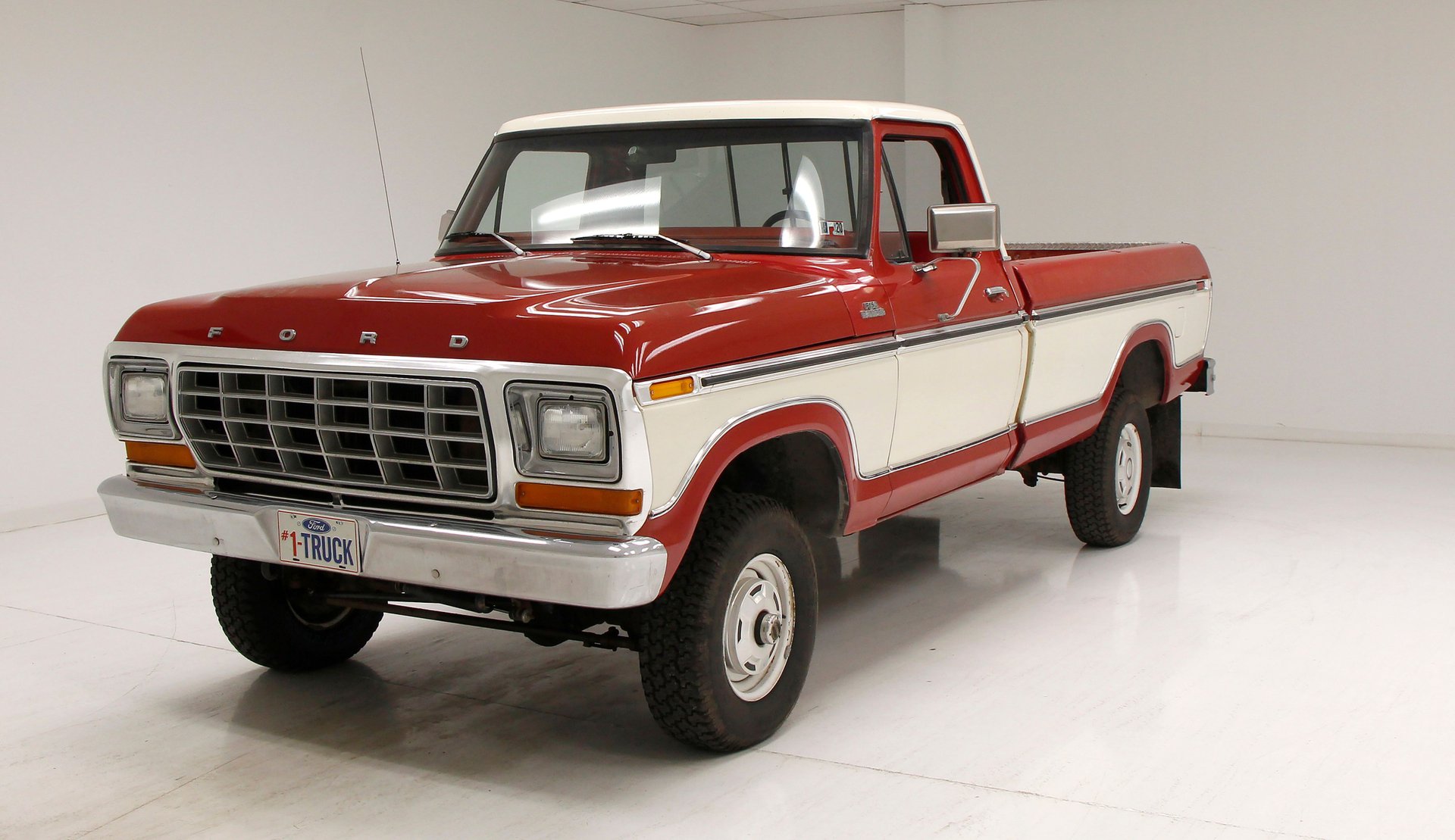 The Ford F150 trucks were introduced to the United States in 1948 and they were known as the Ford Bonus-Built trucks. They were built on a dedicated truck platform unlike earlier versions that were built from car chassis during the war. The first-generation F-Series trucks carried the designations of F-1 through F-8.

For consignment a classic four-wheel drive F150 from 1979. Some dents and dings, this was a farm truck used in Wyoming on a ranch. With its two-tone coloring, high stance, and 4WD it could be utilized in numerous working ways, and it's a classic!

Exterior
Showing itself off in a two-tone Candy Apple Red with Wimbledon White accenting it appears to be a respray of the red and white, with the original hood now clear coated to curb the slight surface rusting and patina that is under the clear coat. The white is reserved for the cab top. and center of the truck, and the red borders this on the sides and door frames. The original grille shows a few dents and dings as does the bed but is shows heavy use and no rust. The original bumpers and grille surround are seen and appear mostly shiny. Dual large chromed side view mirrors are attached. Paint has some faults throughout, and surface rust and some invasive rust is seen on the rear quarter panel rocker. On the white there are some spots of rust that have touched up if you will, but the color of the spotting is off of the Wimbledon white. Standard Ford 15-inch white painted wheels are on all 4 corners.

Interior
A spanking new red bench in vinyl runs from red molded plastic door panel to red plastic door panel. These also are very clean. The original dash is really clean and is fronted by an original steering wheel. An aftermarket JVC AM/FM/CD player has been added otherwise all original controls exist and function. A gray rubberlike material covers the floors and the dual shift levers rise to the dash in the center. Overall the interior presents very nicely and is comfortable.

Drivetrain
The original 300ci inline 6-cylinder engine is in the non-restored engine bay. A single 2-barrel Motorcraft carburetor is atop a Clifford intake manifold. Plenty of patina on all the engine parts attached. On back is a New Process 435 4-speed manual transmission.

Undercarriage
Some surfaced rust is seen on the frame, but it remains structurally sound. Floorpans are good, as are all suspension components and body hangers. Spotty surface rust is noted mostly on the rear of this truck under the bed area. Radius arms and coil springs for the front suspension, and leaf springs for the back. Ford 9-inch 3.50 axles are present as are power disc brakes for the front, and power drums for the rear.

Drive-Ability
A bit of a climb to get into this one, but that new seat is heavenly to sit in. The truck fired right up, and we were destined for the test track. The truck runs fine, does not present with gobs of power but shifts smoothly and offers up a 4WD truck ride.

Keeping it simple with an elegant interior, and sturdy frame and bed to keep you working, or keep it working? 4WD capabilities a high stance and all you need now is a plow!