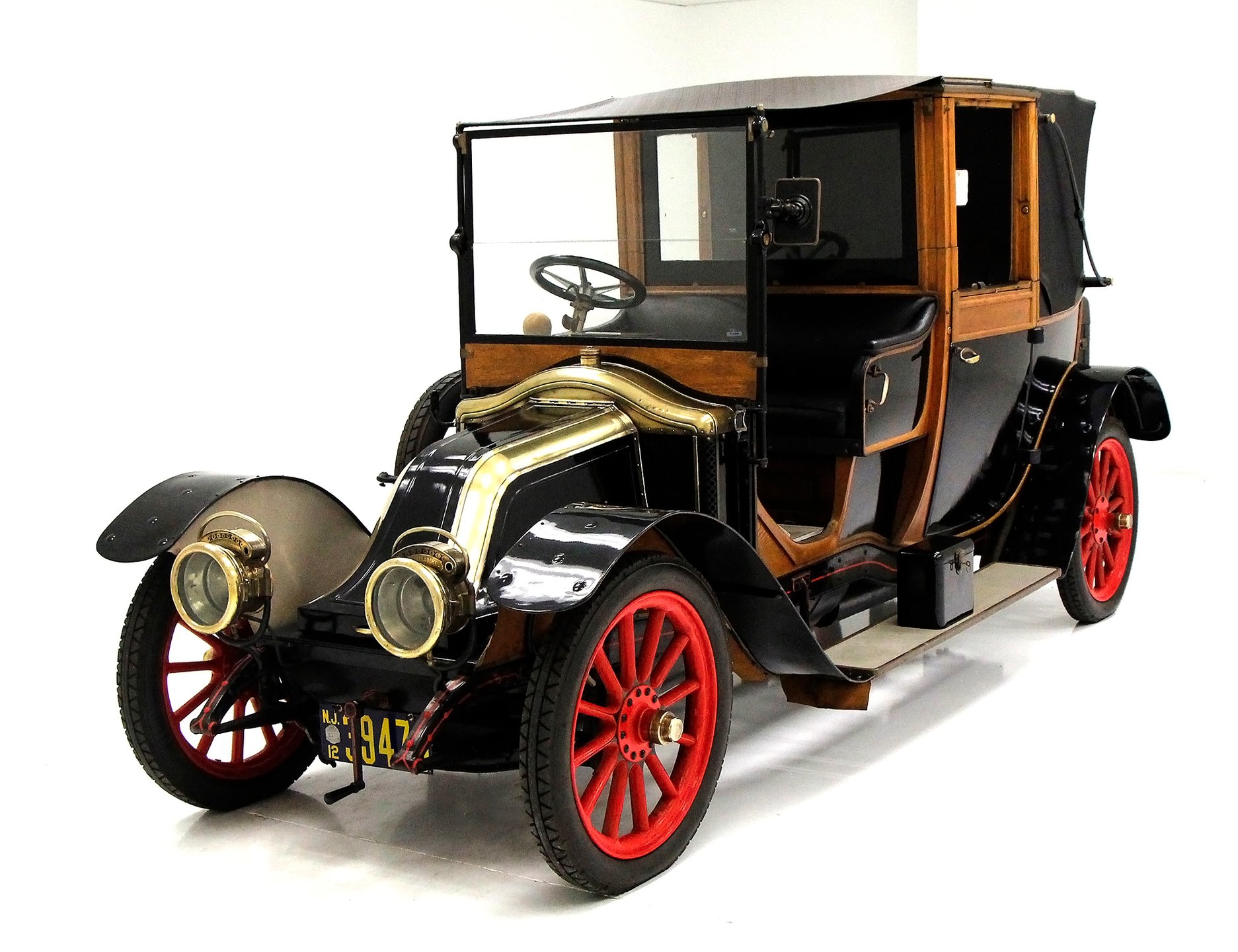 The Brass Era is an American term for the early period of automotive manufacturing, named for the prominent brass fittings used during this time for such things as lights and radiators. It is generally considered to encompass 1896 through 1915, a time when these vehicles were often referred to as horseless carriages. Near the end of the period, cars were taking on a form which is familiar to what we would consider the modern day car per se with a front hooded engine compartment, enclosed passenger compartment, and luxuries such as a steering wheel, various gears, floor pedals and more and more powerful engines.

Originally commissioned from the Renault brothers manufacturing plant, by a Madame Frances Alda, who was a singer for the Metropolitan opera, and ran in social circles with the likes of Tenor Jim McCormack, Philanthropist “Diamond” Jim Brady, and A Mrs. Ray Dennis of Convent Station, New Jersey into whose hands the car would eventually end up. Our current consigner purchased the car in 1961 and held on to it until the time of January of 1992, when a full frame off restoration began. This consigner owned a garage and gas station business, and restored several cars before this, which this Renault would be his Magnum Opus, culminating in the car we see today. Approximately 1,200 hours were put into the restoration.

Exterior
In true brass era style, this custom coached limousine starts off with 2 dangling kerosene powered headlights, in full brass, moves back to a mansard styled hood which is also in brass, and is backed by a brass radiator. This portion of the car is backed up with the chauffeur compartment. A note to the curled squeeze bulb airhorn (in brass) which puts out a sound which resonates for any traffic in its way to immediately move out of the way! Moving rearward we have the passenger compartment which is a mixture of metal painted royal blue, and oak trimmings which have aged coloring and show slight wear, but in overall excellent condition. All above the driver and passenger compartment is a canvas top which can be removed for open air motoring. Metal fenders floating above the wood spoked wheels run from front to rear, and have a long running board which makes easy access to either compartment, and houses some brass accessories such as a canister for fueling the exterior lamps. Bringing up the rear of the car is a large black leather covered trunk that has an old oiler, greaser, and various extra parts inside.

Interior
The car is basically 2 compartments, the right-hand drive chauffeur seat is open air and has a leather bench, simple wood dash, and various levers and pedals for controlling the motion of this car. A wood steering wheel is fronting the instrument-less dash, and a windshield is fronting this dash, and rubber flooring. An enclosed passenger compartment with moving privacy glass screen, fully carpeted, and having a padded jump seat, as well as a fully cloth upholstered tufted and buttoned bench for the passenger(s) being driven. Noted is the belted window actuation system, where a leather belt is wrapping around the bottom of the passenger compartment and privacy windows and is pulled on to raise and lower the windows! The headliner is also cloth and shows as nice and tight. Some extra brass lamps hang from the exterior of this compartment as well.

Drivetrain
This particular Renault features a 2.6-liter “T-head” inline 4-cylinder engine that afforded the car a cruising speed of 30-35 mph. Unlike many of its contemporaries, the Renault shows a sleek, sloping nose with the radiator positioned behind the engine. Additionally, and unlike many cars of that era, the Renault is fitted with a shaft drive (not a chain drive), which was helpful on the less than ideal roads of the day. This engine has a crank starter; however we did not fill it all with fluids and have not run it. It was however stated by our mechanic, that it did have sufficient compression when the crank was turned, but at the risk of losing an arm, or losing the ability to use a shoulder, we dared not try it.

Undercarriage
Simplicity in its complex form, fully restored, this undercarriage shows the underpinnings of early automobiling. One can spend a lot of time admiring the mechanical components of this car both for their engineering curiosities and the quality of workmanship that went into building these cars.

There is a story where a gentleman from Bryn Mawr, Pennsylvania, and his family who were survivors of the disaster of the Titanic, also had a similar car of this 1912 year, on the ship that went down. There was an insurance claim that was paid to him from Lloyds of London in the sum of $4,000. The car that was in the actual movie was a Ford Model A shell modified to look as the Renault did for the steamy scene, and that car was flooded during the sinking scenes and no longer exists...but THIS one does exist and has no water damage!