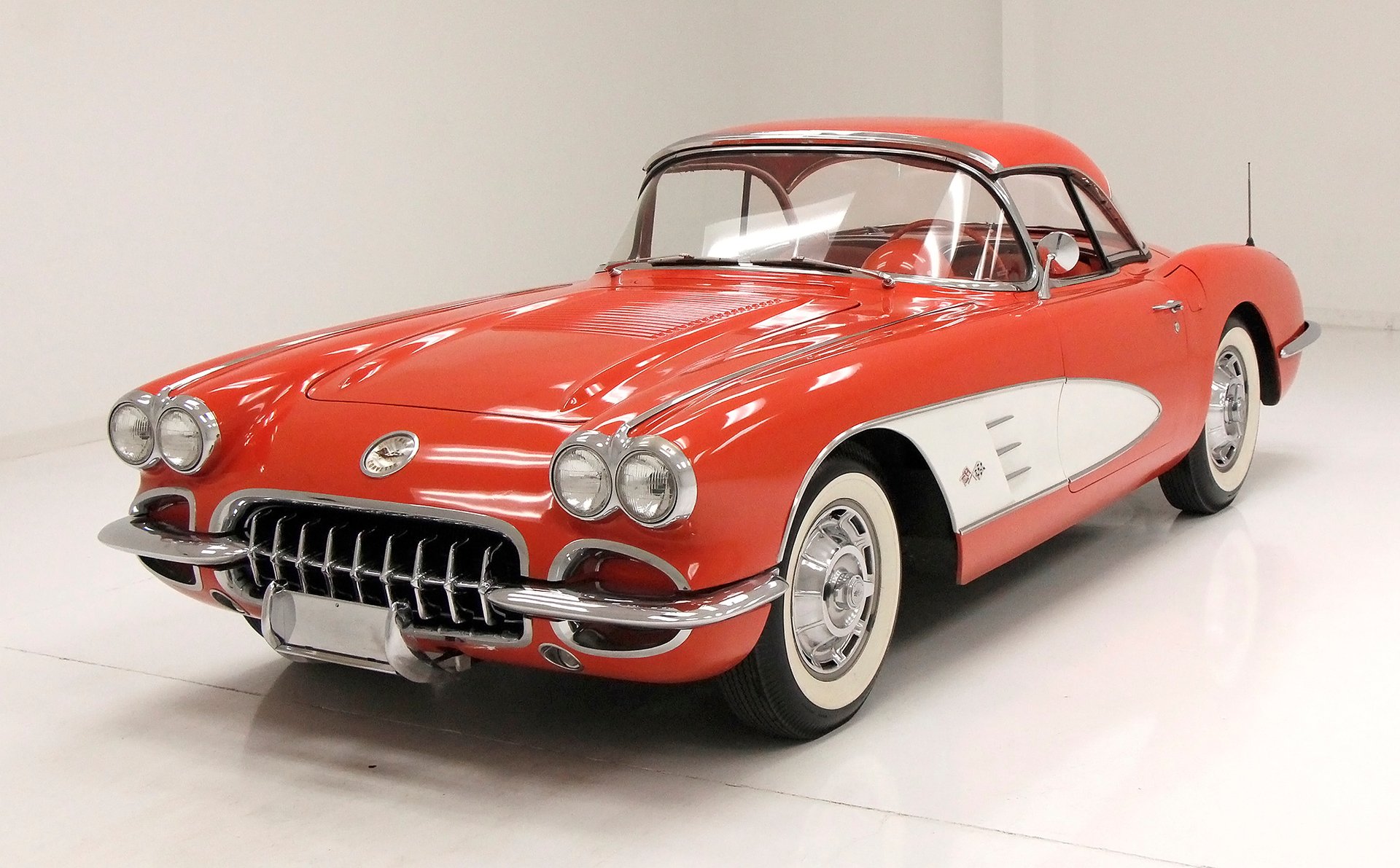 Bill Mitchell once admitted that he and his associates at GM Styling in the Fifties were too willing to "ladle on chrome with a trowel." Fortunately, they were more sparing with the Corvette than any other car in the corporate fleet, Chevrolet's 1958 model shows that theory in action.

27 years ago, our consigner managed to persuade a collector to part with this car, which was to be a birthday gift to himself. Like most C1s, the car was originally assembled at GM's new-for-1954 St. Louis manufacturing facility. A judging by the looks of this Chevy's smooth fuselage, there's no evidence it has ever seen any kind of catastrophic damage. And today, layered in vivid Signet Red believed to be a respray several years ago, the car rolls as one spectacular classic that's superbly preserved.

Exterior
1958 to 1962 was a banner era for the Corvette, as Chevrolet wanted to prove its new flagship could run with the best cars in the world while retaining classic style that would eventually bear an American icon. At the front of this low mileage original drop-top, a toothy grille rides between chrome-trimmed headlights, a translucent header roundel and chrome-trimmed parking lamps. In front of that grille, chrome nose guards reflect intricate bumpers, which bend around chrome-trimmed fenders. Showing the passage of time and usage are some chips, and slight scratching along with the usual dulling of the paint, can be seen throughout. It has aged very well. The sides of this car show correct and beautiful contrasting white coves with 3 chrome spears. Between those fenders, a '58-exclusive hood leads the eye to polished wipers, classy glass and a white canvas roof which is power operated, but currently does not work. The parts to make it work are in the trunk and will be with this car when it's sold. This is supplemented by a factory hardtop. At the back of that hood, traditional door handles float behind a stylish driver's mirror. And at the back of those doors, a flowing deck lid hangs a second Corvette roundel and '58-exclusive trunk spears between chrome bumpers, small reflectors and flush, chrome-trimmed taillights. Power meets the pavement through standard steelies, which spin fairly fresh dimensionally correct wide whites.

Interior
In keeping with this roadster's high-performance theme, interior outfitting remains minimal. What appears to be a mostly original interior, textured red leather seats, still have years of life left in them. There's stain-free carpet that still features a clean, fibrous sheen. Some fading is noted in the hump carpet where a petite chrome shifter is as handsome as it is stylish. Front and center, stylish, retro gauges, a Wonderbar radio and a small chrome mirror look great decorating Chevrolet's famous dual-cowl dash. In front of the driver, a speed-drilled steering wheel spins a glossy red rim around a polished cross-flag horn button. At the sides of the passengers, are the original door panels showing slight patina, a few scuffs and minor dimpling on the original metal trimmed panels. And, behind the retracted top, we can see the trunk with its original liner which shows some cracks in it, but again, also the passage of time well spent.

Engine
Tilt this roadster's lightweight hood and you'll find a correct, 283 cubic inch Chevrolet V8 that hangs a high performance (CU) assembly stamp 375619 in front of a familiar GM single 4 barrel carburetor and factory-rated at 230 horsepower, this tough small block shows as original, (as stated by consigner) and judging from the stamp the odds are highly likely it is. Some corrosion of the original orange paint can be seen on the top of the engine, possibly an earlier fuel or water gasket leak? A chrome-capped air cleaner and original Corvette labeled valve covers show nicely in this patina black engine bay environment. Behind the motor, a 4-speed manual transmission is noted.

Undercarriage
Flip this C1 upside down and you'll find a sturdy, road-ready X-frame that's bolted to bare, correctly over-sprayed floor tubs. At the corners of the car, standard drum brakes complement good handling characteristics with solid and confident stops. Exhaust is managed by big, true-dual pipes, which run from a U-shaped crossover to factory replacement mufflers which show some aging. And everything, from this Corvette's manual steering rack to its leak-free fuel tank, is sitting ready to log miles.

A highly desirable drop-top that wraps an earlier respray around a hot V8 and tough 4-speed, this slick Corvette has a little something for everyone. And what's better: it's exactly the kind of classic that provides endless fun on the highway and head turning in any parking lot. Consigner stated (and documented) 53,971 miles, and since the purchase 27 years ago, a mere 6,350 miles! Now THATS a Classic.