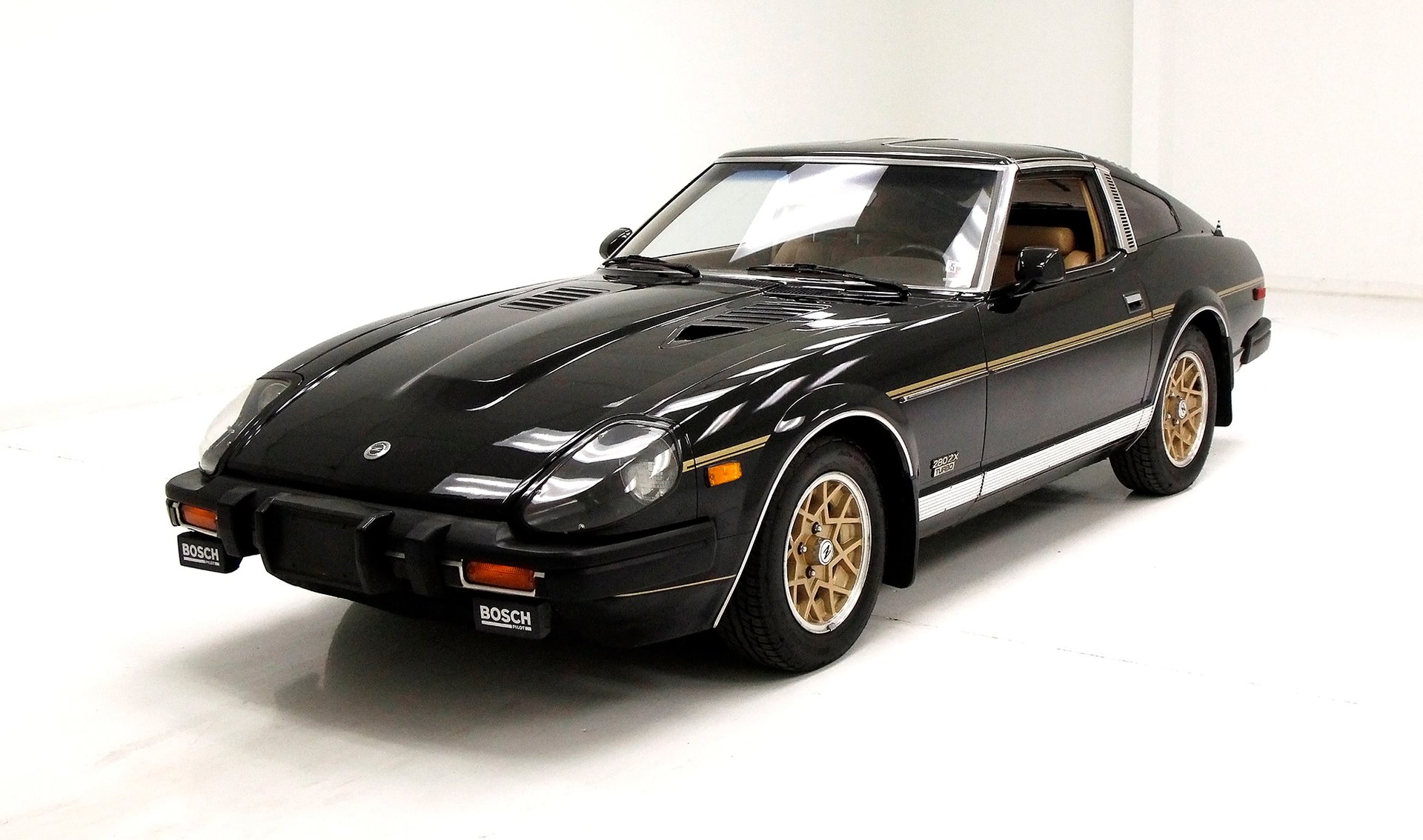 For consignment a Datsun 280 ZX T top. The definition of pony car with its long, long front hood, and snub rear, sporty styling, and throw in a turbo just for some extra kick, or should I say ZX-itement!

Exterior
Covered in a Thunder Black respray, some areas of slight paint “pull up” can be seen in the form of adding just a bit of texture to areas we assume have been filled on the bodywork. It is hard to see and it has to be in the right light but in the interest of full disclosure it is now noted. Gold spears race across the belt line, and nicely polished rocker trim, and wheel surrounds show off themselves in chrome. Plastic, all clear, covers the deeply inset headlights and add to the aero of the long hood. Removable T (K?) top sections, also in black, are nice and tight and show no leaking areas, or the residue thereof. Lattice on the rear fastback glass is noted and shades the rear storage compartment. Gold snowflake pattern wheels show off on all 4 corners, and have a nice Z labeled cap in the center in polished chrome.

Interior
Plenty of gauges and buttons to play with here, while you are lounging in your leather buckets. Dash is original and shows gauging that is clean, clear and accurate. The centered square of digital readouts in tiny red dot lighting unfortunately is not working and is noted because this writer thought it was cool to watch it change. 3 additional angled inset gauges are set into the mid dash area and point their findings toward the driver. Directly under the air control levers we see a dedicated area for the audio system that rivals any home theater of the day. With a steel amp-like looking tuner, separate cassette player, and multi-channel equalizer hung below, any music can be fine-tuned to come out of the high end factory speakers with melodious tones. This stereo sits above a center console that houses the gear shift lever, and toggles for the side mirrors. Mounted into the doors are switches for the power windows, and they are in a field of nice tan leather. A large storage area covered in the gold carpet throughout, doubles as the concert hall for the speakers, and brings up the rear.

Drivetrain
An original engine bay in nice condition houses the original 2.8 Liter Turbo charged fuel injected inline 6-cylinder engine. This is backed by a Jatco 3N71B 3-speed automatic transmission. A test drive reveals that after a good warmup, you can goose this car and be up to speed in a hurry with the turbo kicking in almost immediately.

Undercarriage
With some surface rust and normal patina, the underside is presenting nicely with no items of noting on the structural level. Braking is provided by power disc brakes and they are not shabby and bring you to a short distance halt from speed.

Overall, a nicely presenting body repaired resprayed 280 ZX that runs great, has a good kick in the pants from the turbo, shifts smoothly in the automatic transmission, and stops quickly. What more could you ask for as back in the day, this was one of THE cars to have if you were young and wanted to do some showing off. Nuthin' like good old Japanese technology…Let's call it simplified over engineering!