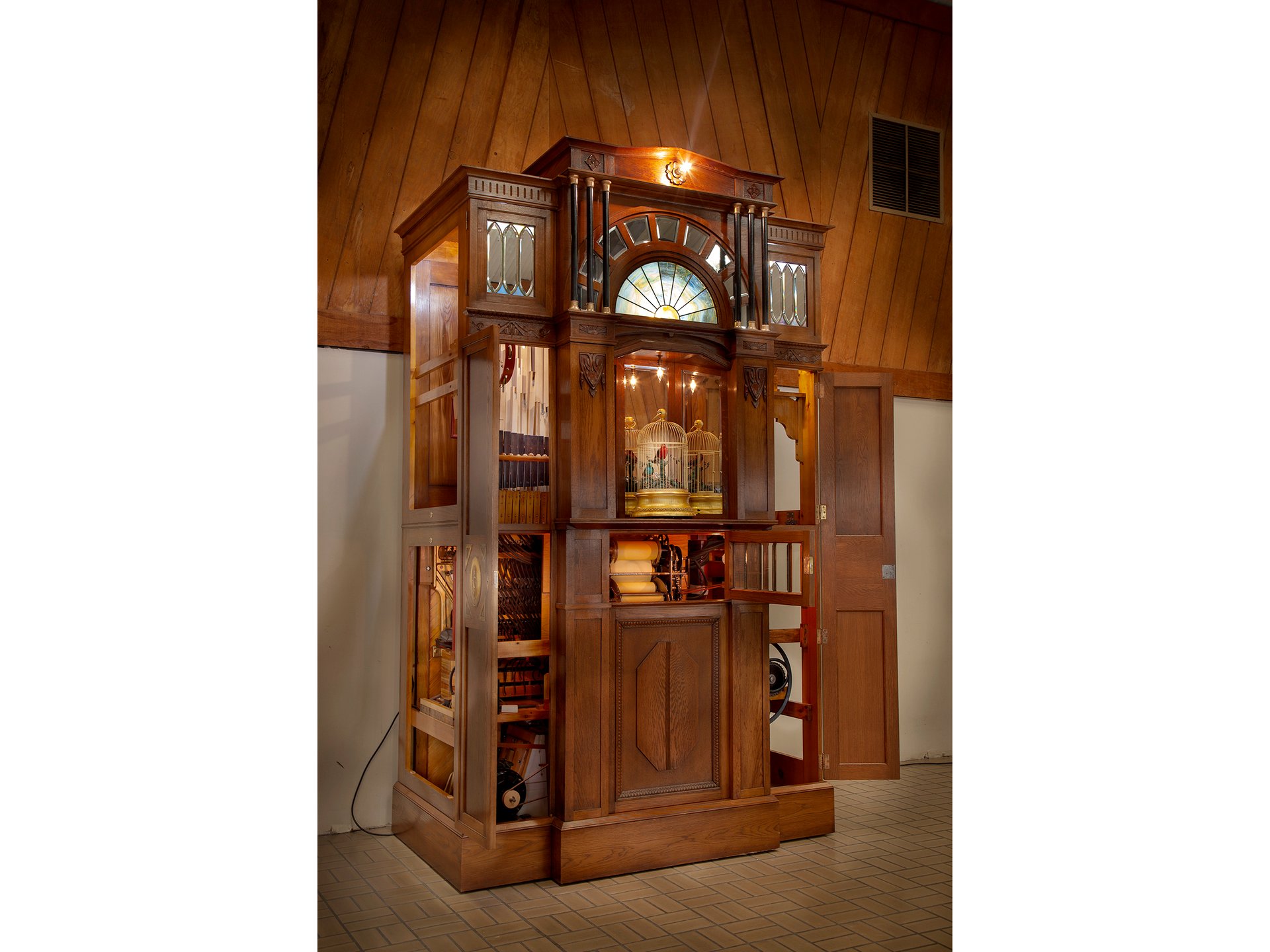 The Rudolph Wurlitzer Company, usually referred to as simply Wurlitzer, is an American company started in Cincinnati in 1853 by German immigrant (Franz) Rudolph Wurlitzer. The company initially imported stringed, woodwind and brass instruments from Germany for resale in the U.S. Wurlitzer enjoyed initial success largely due to defense contracts to provide musical instruments to the U.S. military. In 1880, the company began manufacturing pianos and eventually relocated to North Tonawanda, New York, and quickly expanded to make band organs, orchestrions, nickelodeons and pipe or theatre organs popular in Theatres during the days of silent movies.

“And now for something completely different” …gracing the halls of the massive Classic Auto Mall complex I give you for consignment, a ca.1909-10 Wurlitzer PianOrchestra Model 33A in fully restored and playing music to beat the band condition. It is believed this is the only known Model 33A in existence, and certainly the only one in working existence.

Originally shipped from the Philips Company in Brockenheim, Frankfort-am-Main, Germany to the Wurlitzer company in NYC, then purchased by a dance hall on Coney Island, it eventually made its way to the gifted hands and mind of its current owner, and talented electrical engineer, our consigner, who over the course of 10 years, restored it.

The restoration work commenced in earnest during 1981. Walter Kehoe and Joe Hanulec did ninety-nine percent of the restoration work; devoting one day of almost every weekend for ten years, with some large breaks for certain domestic requirements. One major delay was the conversion of Joe Hanulec's attached garage into a room that was large enough to suitably house the assembled PianOrchestra.

The original piano action was disassembled, cleaned, and carefully refitted with new felt bushings, butts, and hammers. Another challenge was the ranks of wooden pipes that needed to be reassembled. This was a test of patience and endurance. There were over 700 pieces that had to be sorted out and carefully glued back together. How the puzzle of pieces had to fit together was a judgment call, determined by old glue patterns and eyeballing the size of the many similar looking wooden parts. All the pipes are original except for the 15 that were missing, and that have since been replaced with new ones.

Since the lock and cancel register unit was missing, another similar unit was located in California. It belonged to a Wurlitzer style 32 Concert PianOrchestra in the Jerry Cohen collection, Studio City, California. Jerry's collection suffered an unfortunate and devastating fire in 1979, badly damaging the style 32 PianOrchestra. Jerry Cohen gave permission to photocopy and make drawings of the damaged, but basically intact register unit. The replacement register control unit for the 33-A PianOrchestra was duplicated from scratch, with over 300, oftentimes intricate, pieces that had to be carefully crafted.

The roll changer was missing, so a loose Philipps three-roll revolver mechanism was bought from Terry Hathaway circa 1974. Then, in 1986, just prior to fitting the little three-roll changer into the PianOrchestra, Joe Hanulec received a call from a friend, Fran Meyer, who worked for William (Bill) Edgerton's Mechanical Music Center, located in Darien, Connecticut. Fran informed Joe that they had recently purchased the remains of a piano technician's shop, which included the kind of Philipps six-roll changer that was needed for the PianOrchestra.

The xylophone was found in New Jersey, and the birdcage belonged to a collector located in Cobbleskill, New York. Despite the collector being a close friend of Joe Hanulec, and a former Long Islander, too, it took 15 years before Joe Hanulec was able to talk his friend into selling the birdcage. In late 1991, just in time for the East Coast Musical Box Society Chapter meeting in January of 1992, the birdcage finally became part of the PianOrchestra once again. More recently, the birdcage was restored, with the metal cage itself gold plated, the birds re-feathered and the base gilded. This total restoration of the bird cage was done by Jere Ryder of Automusique, Summit, New Jersey.

With the press a doorbell switch, this PianOrchestra belts out music from a bye gone era and is something that unless you experience it in person, and without an intricate sound recording studio setup, would be very difficult to obtain a quality recording of. Listening to it is an emotional experience, not only due to the sound, but it peeked my imagination to run wild conjuring up images of a massive dance hall, with guests in their fineries enjoying a dance, or drink, in a pre-radio, and television era. Now that's entertainment!