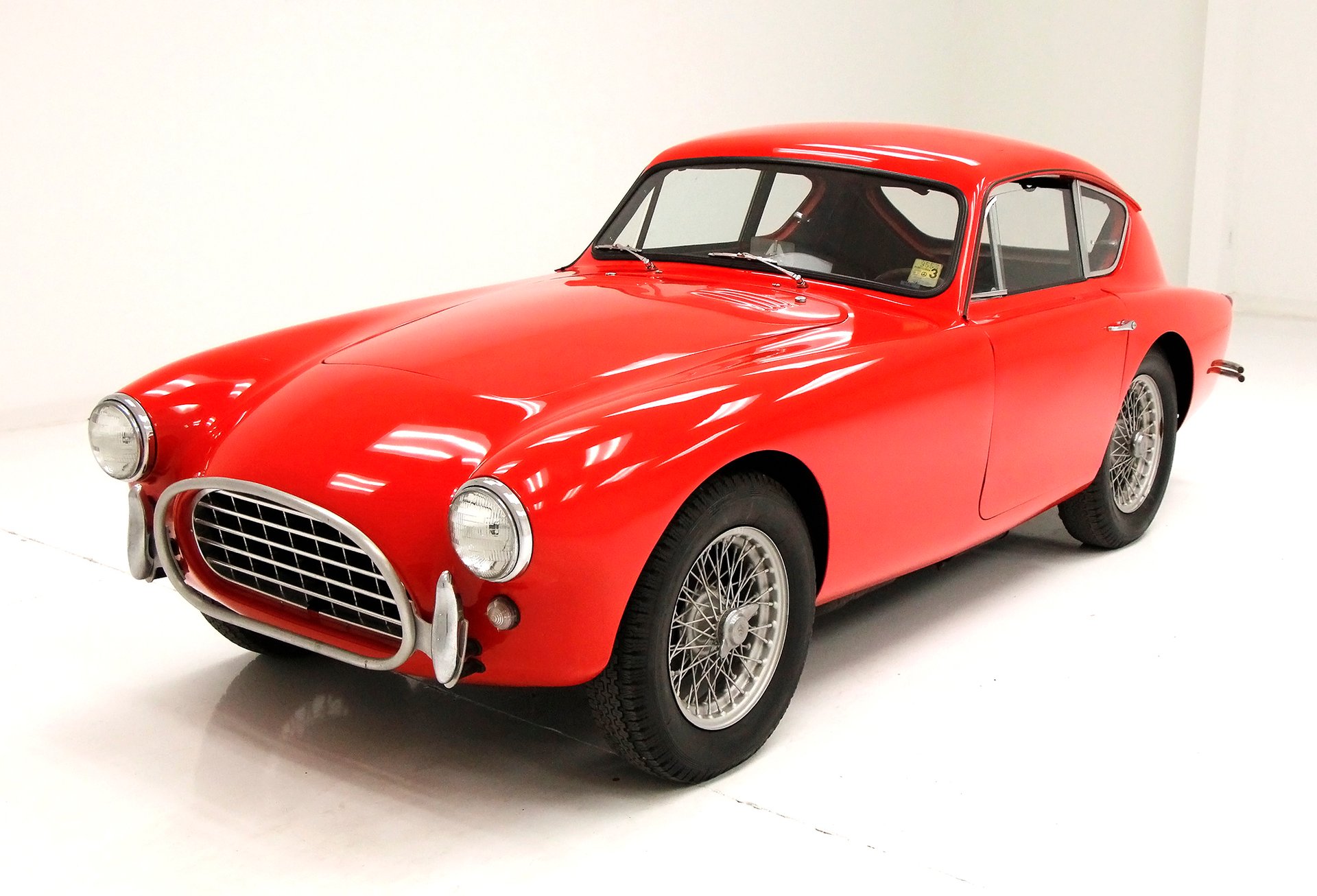 The base of the Shelby Cobra was a small roadster from England called the AC Ace. Before the fender flares and the big V8 the Ace was an attractive narrow body car that didn't have a gigantic V8. Alongside the Ace, AC made about 100 Coupes called the Aceca. The Aceca is a delicate coupe, and one of the first hatchbacks ever. It is painfully gorgeous, and only until very recently appreciated.

At the Kirk F White Auction in Philadelphia in 1973, a young couple were looking for a neat little sports car for a then fiancée to drive back and forth to college. They had their eyes on a Gullwing Mercedes (which there were 5 at the sale!), but the price those were bringing ($15,000) was a little over their budget. They settled on the now for consignment AC Aceca coupe, which was a daily driver for at least 10 years and under single ownership for 46 years.

Exterior
Hand built in AC's Thames Ditton workshop, this car has an aluminum body work hand formed utilizing wooden “bucks” as the molds, the body presents in very nice condition. Minor denting can be noted at the rear just below the “hatchback”, but otherwise very straight and true. Red paint adorns this restored “al-uminnum” body. A plastic rear hatch window is seen, and the front bumper is just the push bars, (which was an option when ordering), that conjoin with the chromed trim of the egg crate grille, and the rear is the 2 tube chrome with the push bars. All chrome is in good condition.

Interior
Considering this car has spent the last several years of its life in a garage, a 98% restoration on hold, we see plenty of patina surfaces and dust prevails. All is not lost though as a thorough cleaning with the correct substances will bring this interior back very close to original. Within the time worn dash are 3 separate wood veneered islands, if you will, the first houses original Smiths gauges, and warning lights, and sit behind the left hand driven original steering wheel. The second is the ignition and AMP/Temp/Fuel gauge cluster with the wiper and dash light dimmer knobs. 2 holes prevail and it is unknown what was mounted within them. A chromed ashtray sits above this panel and the small rear-view mirror is mounted on the top of the dash in this centered location. The third panel is the glovebox. As noted, all three panels sit with a black leather squared off simple dash. New black carpeting floods the floor under the tuck and roll stitched buckets. The rear cargo area is in good condition.

Drivetrain
Here's where we deviate from the beaten path just a bit, and upon a flip of the bonnet, we are met with a surprise! No longer the original crossflow inline 6 cylinder, we now have a small block Ford 289ci V8 topped with a Holley 4-barrel carburetor, and chromed air cleaner. The electrical system was changed to 12-volt, and a 4-speed manual transmission was put in to withstand the more powerful forces of the V8. An interesting fully documented handwritten book details all the operations that were performed on the power plant upgrade, as well as voluminous repairs and redux for the entire car.

Undercarriage
A sturdy large tube frame is seen underneath and is totally restored with no rust or structural issues. An undercoating has been applied, and it is unknown what's underneath that, however any typical invasive rust one can view through this coating, and on this car, we see none. Floor pans, toe kicks, and rockers appear sturdy and rust free. In the interest of full disclosure, there is an area near the underside boot, that was cut out, possibly for a new fuel tank? but is worth noting as there is some bent metal, that otherwise seems unremarkable. Front disc brakes and rear drums are now on this beautiful British hand-built automobile.

Back in the early 1970's these cars were inexpensive drivers, and people who owned them, just enjoyed them, and used them. In no way were they even thought to be collectible. With the rise of the Cobra, and all the” fluff “that accompanied it, this car's sister the “ACE” was the inspiration for the aforementioned. This car remains an original, excepting the engine change. Some people like their cars to show the passage of time, even including rust. This car has been remediated of any of that and has an engine which others have certainly fantasized about, but action was only taken on this ONE! The interior, with new carpet, remains original and shows the passage of time, and certainly not the degradation of a gorgeous rare example an Ace of design in the Aceca! Bloody well-done mate.