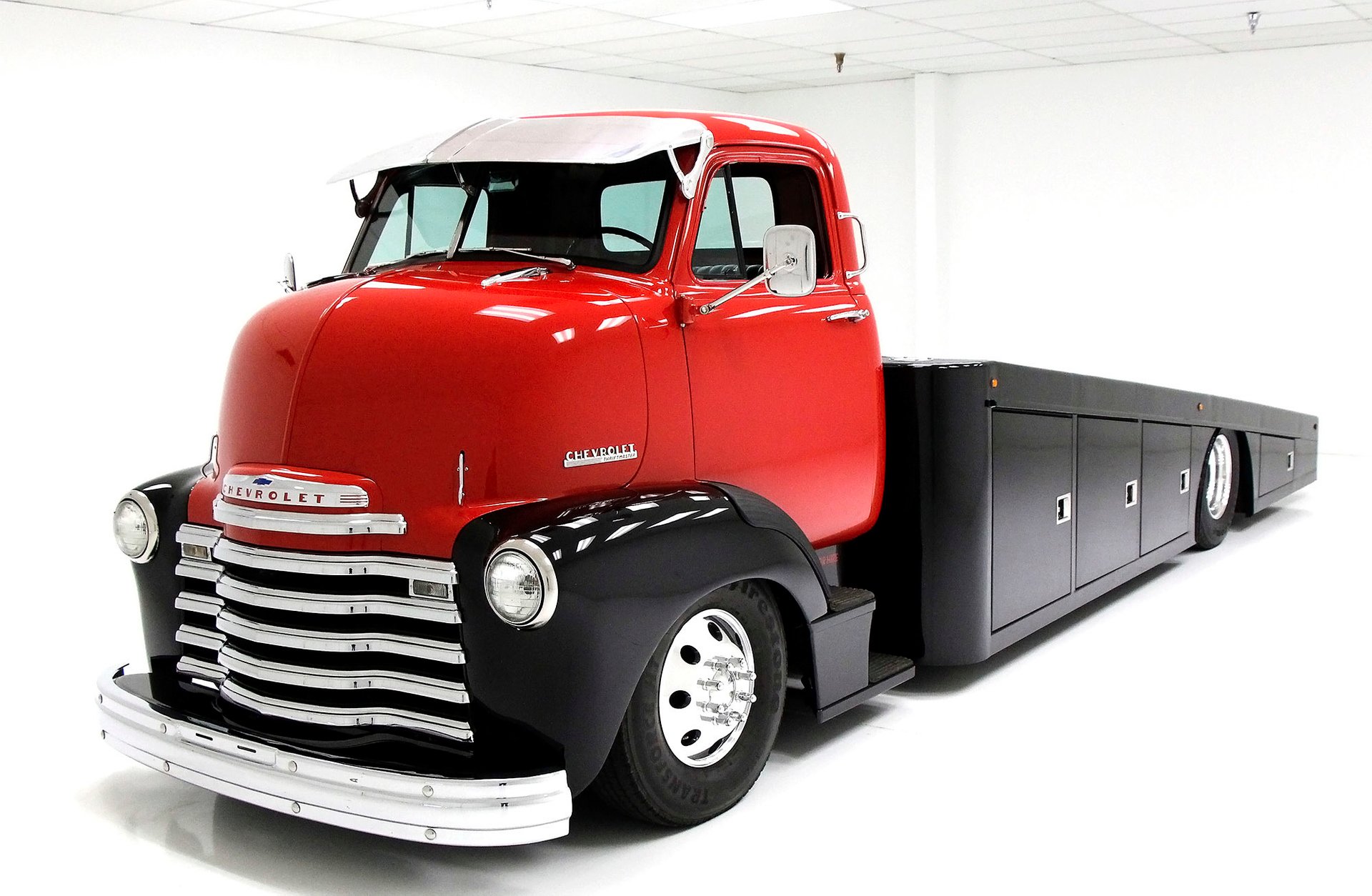 The introduction of the first modern cab-over layout in the United States is credited to industrial designer Viktor Schreckengost, who, with engineer Ray Spiller, designed a cab-over truck for the White Motor Company in 1932. Schreckengost was later joined by other designers such as Raymond Loewy who designed the Metro series of vans and trucks for International Harvester. The bodies for these vehicles were initially produced by the Metropolitan Body Company (MBC). The company produced a wide variety of truck and commercial bodies for several vehicle manufacturers such as Chevrolet, Ford, Dodge Bros., and International Harvester until 1948 when they were purchased by the latter. MBC was instrumental in the development of COE route delivery bodies in the 1930s.

And now for one of the hottest trends in vintage trucks going today, for consignment we give you a 1952 Chevy COE Thriftmaster, which was a California truck, sent eastward to our consigner who took the COE by its short hood and tall cab, and began to build a wild worker, which runs like a clock and hauls like a …..well…hauler! Stay tuned.

Exterior
Blasted stock parts were given a 2 stage Black and Chevrolet Commercial Red coating. And to do it just right all grille parts, and bumper were given a shot of Librandi Chrome which is just pristine like the top-notch paint that adorns the cab. Throw on a polished aluminum sun visor, and two 50's style gleaming outboard rear views, and original re-chromed badging, and my friends now you have a banging COE..but wait…there's more! A 71 Chevy C30 ramp from rusty New England was brought back to like with plenty of TLC, a good blasting, powder coating, and a top surface coat of bed liner paint. Strap on a Super winch, a few hold downs, hidden hinge storage custom doors, and you are in business…well…almost!

Interior
K&S Auto provided most of the interior magic as far as the upholstery, which includes covering the original seat and headliner with tuck and roll upholstery, and custom designed matching tuck and roll was carefully sewn and mounted on to the door panels…not before the whole interior was sprayed with bed liner, as consigner states he wanted lots of sound deadening...and he has it now. New Vintage USA quad and speedo gauges in the dash and custom fabrication of the gauge panel that sits below it, as well as a custom coffee cup holder for those long hauls was added to the dripping with 1950's style chromed and Chevrolet Commercial Red dash and front it with a Lokar shifter….now we are ready to rack up some miles…whoah! There's more…

Drivetrain
Pulling the heart out of a Ford 350 Box truck we have a 7.3 Powerstroke Diesel with intercooler which was mid mounted behind the cab, neatly under the ramp. Just swing open the two foremost doors and gaze upon this diesel beauty, attached to its original transmission and E40D automatic…and a little known fact which you can also view is the original dash from the 97 Ford Box truck…mounted right next to the power plant and dutifully attached...because consigner says that if that dash is not there, the truck will not get out of second gear?? How Kewl is that….and last but not least…

Undercarriage
Take a 1986 1 ton Dually chassis and stretch it 45 inches, powder coat it, bag the suspension with Accuair E-Level ride controller and put on a class 4 trailer hitch with brake controller installed in cab, and my friends we are getting close to a great hauler COE nirvana…patience….Let's put on a Dana Dually 4.10 ratio rear, and top the whole thing off with a dose of ultra-cool, and we are ready to haul some ass, or at least some awesome vintage cars..

A really kicking quality, no stones left unturned, nothing left to caution, custom build that was an obsession. An obsession with the consigner has had his fun, and is now ready to move on to another dream of his…..stay tuned, but meanwhile watch the Classic Auto Mall Channel for updates because this baby ain't gonna last, as they say…..whoosh out the door!