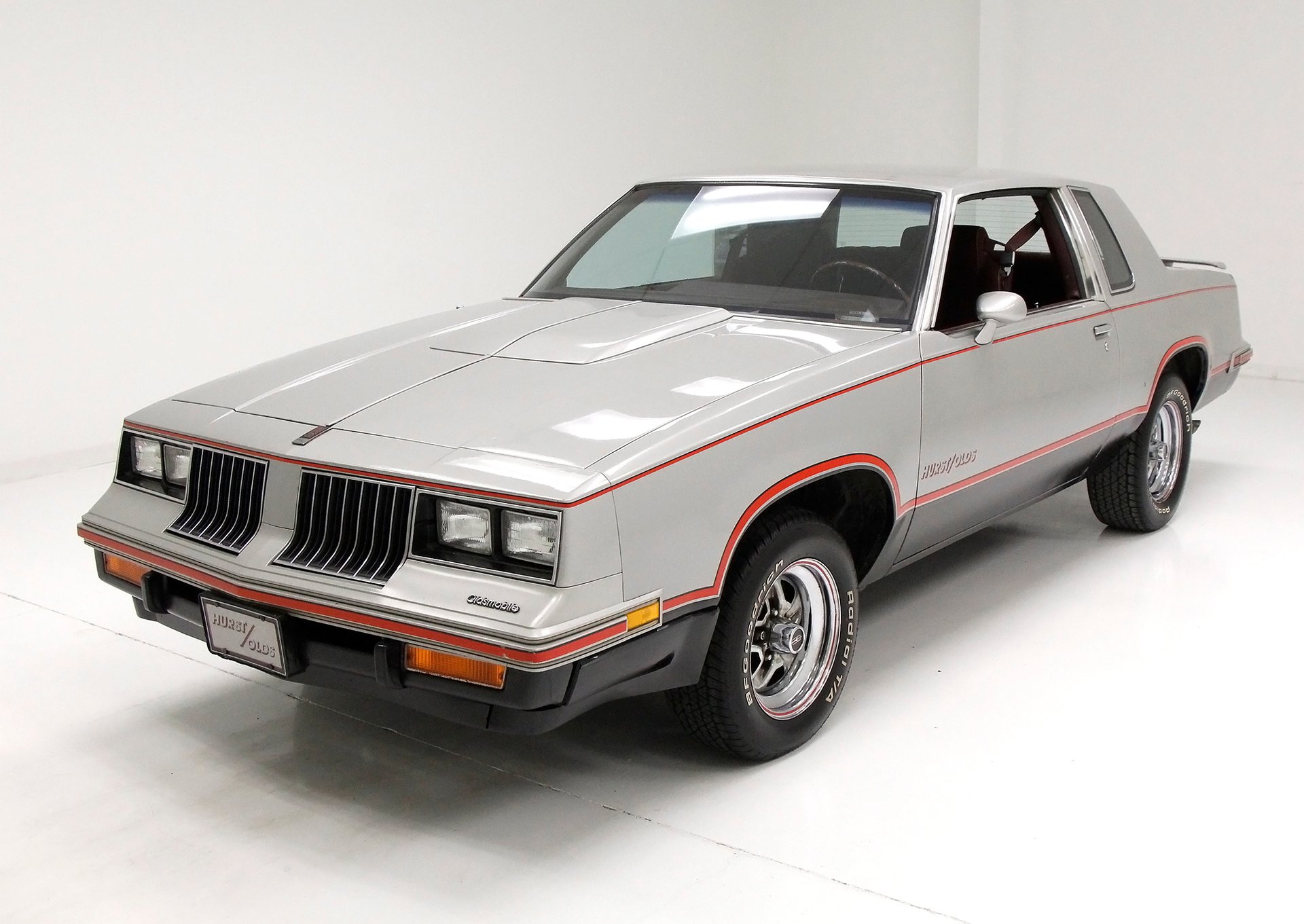 After the Cutlass line was split between the front-wheel drive A-body Cutlass Ciera and the rear-wheel drive G-body Cutlass Supreme in 1982, GM again offered a limited-edition Hurst/Olds - it was the 15th anniversary of the first Hurst/Olds introduced in 1968. The Hurst Lightning Rod floor shifter was introduced in the '83 H/O. For the 15th Anniversary Edition, the '83 H/O came only in black with silver rocker panels. 1n 1984 the colors were reversed, and silver dominated the upper 2/3 of the car and black was on the rockers. Red interiors and the essential lightning rod shifter configuration were on the 3001 units produced that year.

For consignment a 1-owner Hurst/Olds car with some modifications to the original. Meticulously cared for, this car comes with the original car concepts booklet, owner's manual, the original bill of sale, and everything else that came within the glove box.

Exterior
This T-top delete car draped in the quintessential silver over black rockers, has it all correct on the exterior. A new style "Hurst/Olds" emblem was introduced for this last year, and red and silver stripes separate the black and silver paint. Chrome 15" wheels fit Goodyear Eagle GT tires, a power bulge hood and rear spoiler gave this car a purposeful look. Dual exhausts with rumbling mufflers meant there was no mistaking the H/O for a garden variety Cutlass, as it passes by you.

Interior
A swing of the doors reveals panels that are richly adorned with velour top, molded vinyl handles housing window controls, and carpet bottoms on the doors, with smatterings of burl wood within. Power locks and power windows, as well as an adjustable mirror toggle can be seen. As we slide into the power adjustable velour bucket (not working) which presents in good condition, but shows some smudges, but no tears, we note a center console sits snugly in between these seats and houses the reason we bought the ticket…. the Hurst Lightning Rod floor shifter, showing all 3 (yes 3) shift levers proudly. Hey, its 1984 and we had not even thought of paddles on the steering wheel? Real men use shifters, and when they do, they go to a race, and they pose with Miss Hurst Shifter, and display that said photo on their office wall for all to ogle at. Pretty much standard fare dash wise, the essential gauges and 1984 Univac looking cluster of idiot lights on the drivers right. A rear defogger is installed as well as a premium cassette sound system that does a great job with my “Good Bye Yellow Brick Road” cassette. A/C and cruise control are the other options installed. An alarm system is also installed.

Drivetrain
A 403ci V8 replaces the original 307ci V8 mill which is still retained. NOS mountings and lines to the carburetor can be seen, so let's say it comes with NOS. Attached to the mill is a rebuilt transmission beefed up to handle the extra power of the increased CI and the NOS.

Undercarriage
Very sturdy, and invasive rust free, we see a nice clean well-maintained underbelly of this beast. New straight back dual exhaust with manual cutouts are noted, and otherwise unremarkable as to anything out of the ordinary.

The quest for more power has been man's greatest goal since the dawn of time. Before horsepower it was fire and its heat. Now it's horsepower, and an example with more than the usual. Consigner states that a mere 20,000 miles are on the replaced engine and transmission. Bring in the Miss Hurst Shifters, and let's start grinding some gears!