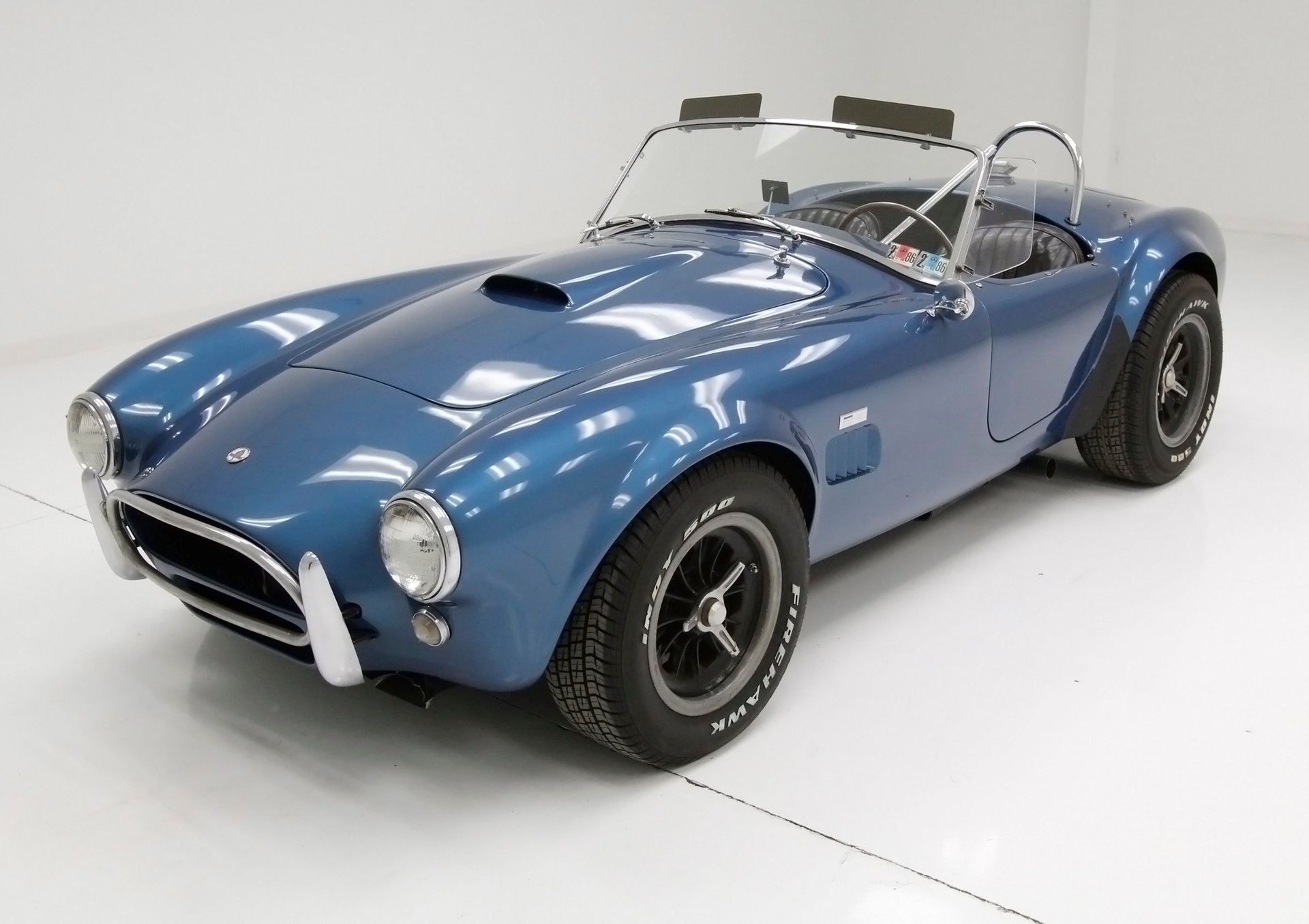 Even before he started racing professionally and won the 24 Hours of Le Mans, Carroll Shelby had a dream of building sports cars under his own name. In 1961, he got the news that AC Cars from England would stop production of their AC Ace model since the Bristol six-cylinder engines weren't available anymore. True entrepreneur at heart, Shelby realized that the light and nimble British roadster could be a perfect match for a powerful American V8 engine and that this could be the chance of becoming a constructor, and not just a retired racing car driver. He contacted AC Cars and they sent him an engine-less body to his shop in California. With some help from Ford Motor Company and a small team of mechanics, the first Shelby Cobra was introduced in 1962. It was powered by Ford's 260ci V8 engine, and later with a venerable 289ci V8, and it pretty soon took the sports car world by a storm. The combination of lightweight body, small dimensions and brute US power proved to be revolutionary and the car did extremely well in competition all around the world.

With plenty of reproduction companies each touting their attributes for their “kit” cars there is lots of non-originals floating around with various configurations, and packages. What there are very few of are original documented non kit cars which we refer to as actual originals. For consignment is a documented original Shelby Cobra...and the room goes silent!

From the Shelby Registry
CSX 2133-Bright Blue This Cobra was billed to Shelby America on 5/20/63. Shipped to Los Angeles 5/24 aboard the SS Dongedyk, and consigned to Ray Geddes-Ford Division, FoMoCo, Dearborn Michigan on 8/1/63. It was picked up at Shelby American. The car was then shipped to Michigan where it was invoiced to Jaques Passino FoMoCo as number 2133 with class A accessories…a luggage rack, and WSW tires on 9/16/63. This was the first Cobra known to have been built with the final style small round Cobra Badges. It served as a test car for an article in Sports Car Graphic Magazine where it received rave reviews. Ray Geddes then consigned the car to Max Larson Ford, Inc. (Coldwater, Michigan) #1 Cobra AS IS Chassis #2133. The first known owner who purchased the car from the dealership was a gentleman named Richard Wright. Richard then sold the car to a Horace G Moore in the late 1960's. Advertised for sale in 11/70 from Horace, the car then had a roll bar and pin drive Halibrand Alloy Wheels. It was then sold to Vincent Vozza in early 1971. He held on to the car until it went up for sale in early 1973 where it was then advertised as “AC Cobra 289 supercharged, black, flared fenders, chrome roll bar, hood scoop, 9.5 Halibrands, Goodyears, 11,000 miles, side vents side pipes. Herb Conner (Pennsylvania) bought the car and inserted a new 289 and offered it for sale in early 1976: “AC Cobra 289, Balanced, blueprinted, engine, factory magnesium wheels, both tops tonneau, roll bar, never wrecked, street legal very strong, good original condition. It was purchased by Anthony Sciarrino (pay where the car appeared at SAAC-2 (Hershey PA) on 7/1977. At this time 2133 had been painted Guardsman Blue and was equipped with 6.5” six spoke Ahlibrands at the front, and 9.5” Halibrands at the rear, with rounded front flares, large flat rear flares, a chrome roll bar, a LeMans fuel cap, and a hood scoop. The side pipes and side vents had been removed, Smith Gauges had given way to later Stuart Warner units, and the dash had been recovered. Paul D. Mallory (Bryn Mawr, Pennsylvnia) acquired 2133 in the early 80's. Paul had the car stripped to bare aluminum, and repainted Guardsman blue. Alloy side vents and an oil cooler were installed at this time, and 7.5” GT40 Halibrands replaced the wider wheels formerly used at the rear, with a corresponding revision of the rear flares to narrower, more rounded design. In 1984 (not 1987 as noted in the Registry) Mallory sold the Cobra to the current consignor. The car presents in its current iteration. Paint is in nice condition showing patina and some flaws (mainly on trunk lid with fuel spill stains, and slight bubbling of paint) but resprayed in 1984 and shows well.

Interior
With the dash being recovered, and Smith's gauges changed to Stewart-Warner units, two original leather wrapped bucket seats in black, and black carpet, and an AC steering wheel with 3 drilled metal spokes and a wood outer rim, the simple but effective interior is complete. A hardtop (unrestored, and side curtains are included with this car).

Drivetrain
The original 289ci V8 has been replaced with a balanced and blueprinted 289ci V8. The transmission is a Ford Toploader 4-speed manual. Performance figures for the 289 Cobra from national magazines in the 1960's indicated 0-60 times of 5.7 seconds and the quarter mile 14.0 @ 99.5mph.

Undercarriage
Some surface rust is noted on the tubular frame and suspension parts, but it is minimal. All wheel wells, and floorpans appear in good condition.

It features disc brakes front and rear and it rides on Firestone Firehawk Indy 500 255/60 R15 on the rear and 215/65 R15 on the front. The suspension is leaf spring (buggy) to top of spindle and a lower a-arm in the front and the rear has an IRS. Th exhaust system has headers that flow into turbo mufflers.

Gentlemen start your engines…Seeing is believing, and for the very serious collector, or someone who is absolutely passionate about having something original, now is your chance to come to Classic Auto Mall and have a gander at a piece of automotive history. Maybe even take it home!