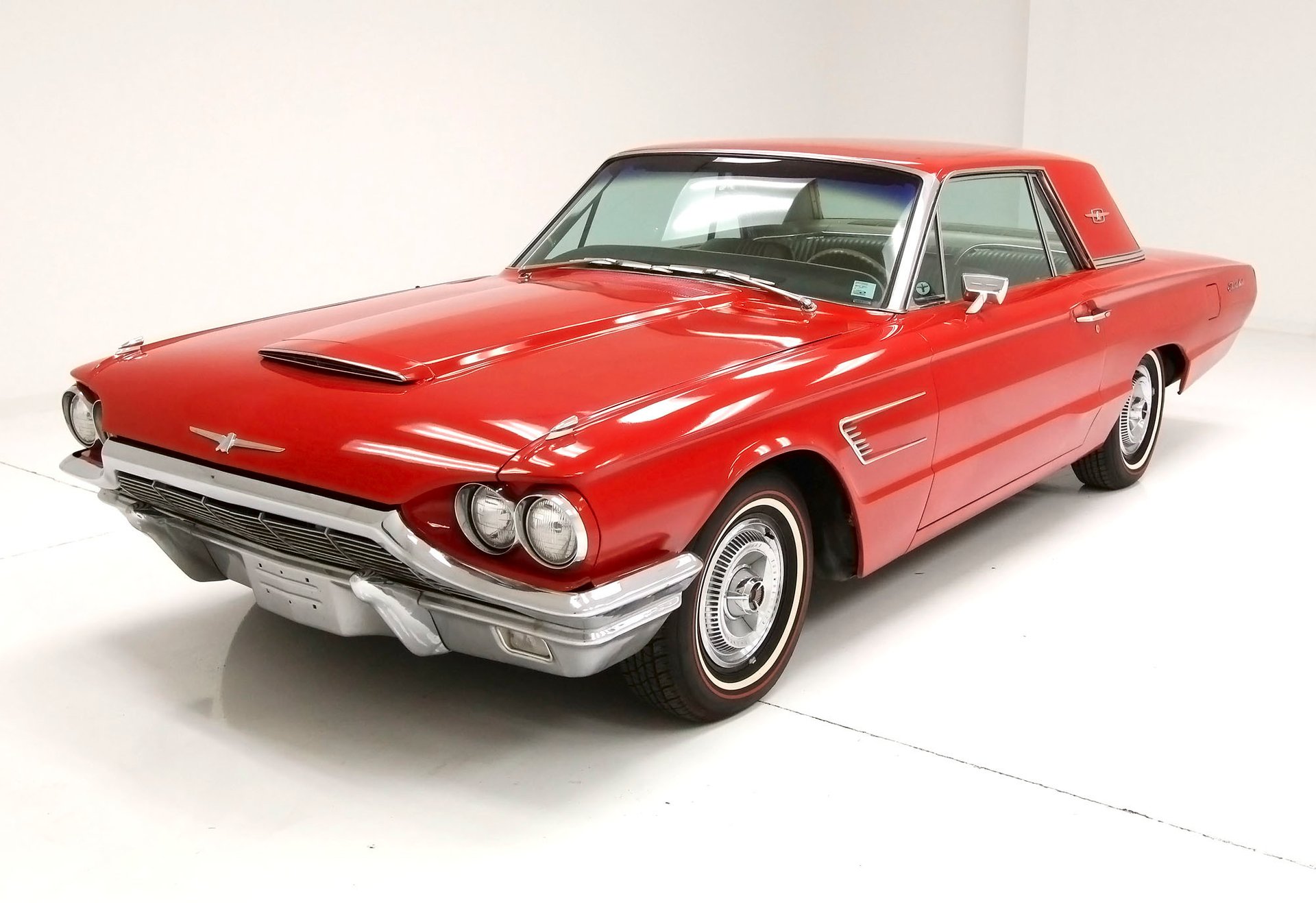 According to Palm Springs Life magazine, the car's final name came not from the Native American symbol as one might expect, but from an ultra-exclusive housing tract in what would later be incorporated as Rancho Mirage, California: Thunderbird Heights. For 1965, the Thunderbird was restyled discarding some of the rocket-ship styling cues of the previous generation in favor of a more squared-off, formal look. Dimensions changed only fractionally, and the suspension, engine, and transmission remained as before, but continued efforts to minimize noise and vibration from the unit body led to a weight increase of some 244 pounds. The Thunderbird's sporty image had by that time become only an image.

For consignment this 65 “Flair Bird” a nickname acquired since the “Bullet Bird, and the “Square Bird” were now old hat designs. Looking more like a high-priced Lincoln than a working man's Ford, the fourth generation Thunderbird reimagined the brand's familiar bullet profile with heavy style lines and intricate trim.

Exterior
What was originally Prairie Bronze Metallic (code P) is now covered in beautiful red. At the front of the car, a '65-exclusive grille flows seamlessly into an angled bumper, which centers petite parking lamps beneath chrome-trimmed 'eyebrow' headlights that intentionally recall the earlier 'Square Bird'. Above that grille, a correct, bird-branded hood centers a tasteful scoop between classy turn indicators and stainless-trimmed glass that's capped with a hardtop. And at the back of those quarters, a jet-inspired decklid founds a bold valance around sequential taillights, a second bird emblem and nondescript reverse lamps. Standard T bird hubcaps are wrapped by small redline, and a larger white wall tire. Brite work and bumpers as well as badging, appear in nice condition.

Interior
Ivy Gold as was the original, and indeed may be original vinyl buckets in front, and a rear bench in back with a fold down armrest. A jet age inspired center console swoops past the buckets, offers a center glovebox, and the standard 1960's cigarette setup, then turns to aluminum framing black plastic, and houses the window controls. As is moves forward it climbs to the dash, housing the temperature controls, and AM radio. Up to the top of the dash where it turns to vinyl, are the futuristic wiper and air vent sliding toggles. These are reminiscent of the very same toggles used on the Starship Enterprise when it jumps to warp speed! The ultra-modern speedometer has numbers in squares, and a bar that rolls right as you gain speed. LOOK MA no needle indicator! This is fronted by 4 ball in cup stainless gauges, and the original tilt away steering wheel.

Drivetrain
Standard fare for the 1965 Bird, was the rock solid 390ci V8 producing 300hp, and a 3-speed automatic transmission. A 3.00:1 Ratio differential is noted, as well as front disc brakes were standard. The engine has the gold painted air cleaner cover, and valve covers, and presents relatively clean, as does the underside. Power steering and power brakes also standard on this classic automobile.

The new red exterior, and gold interior add a nice combination that was not available in 1965. Well preserved, and quick starting, as well as a smooth idler, and gear changer, this 1965 “Flair Bird” lives up to its name. This iteration lasted only 3 years, then the Thunderbird underwent yet another design change.