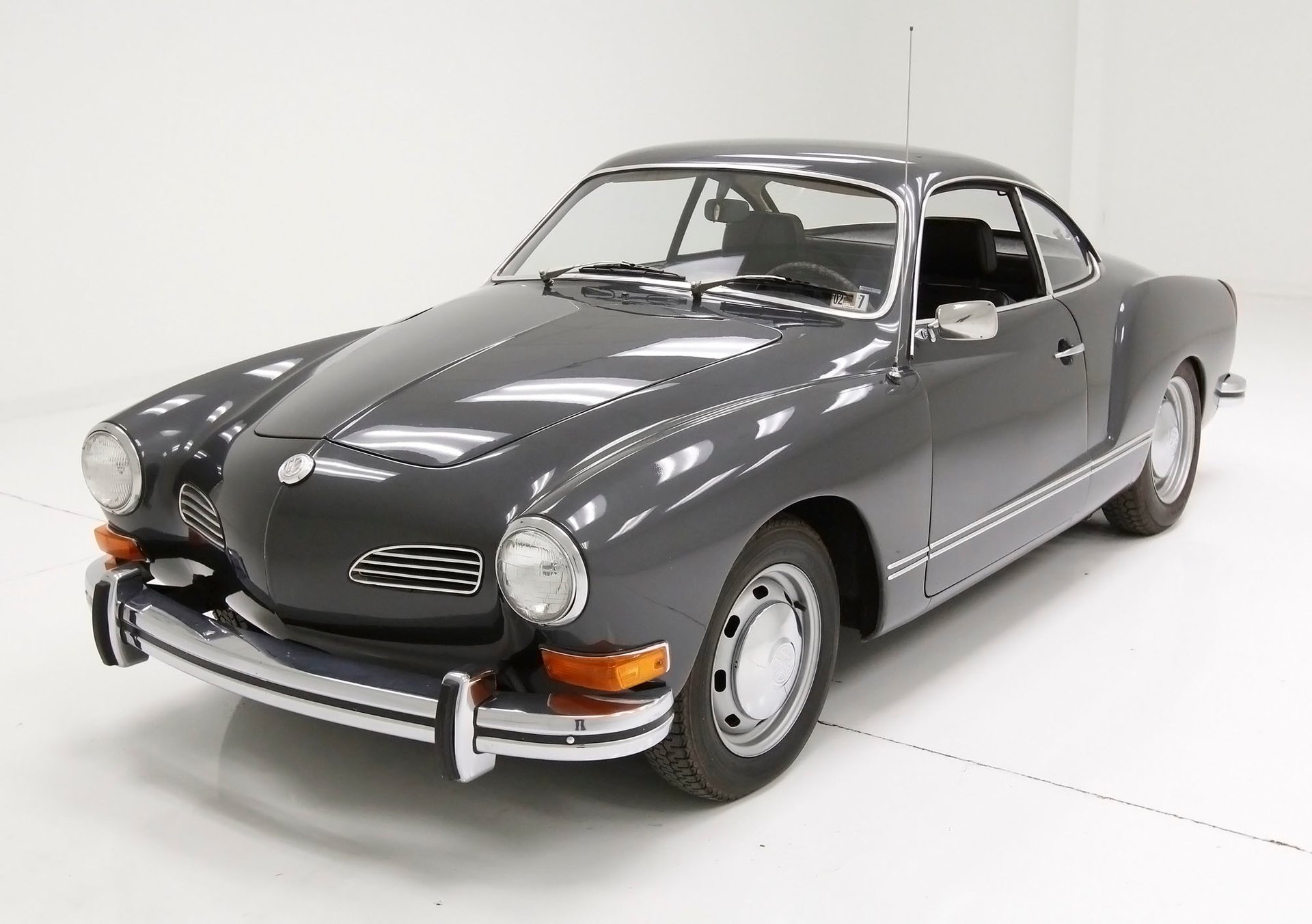 The first Karmann-Ghia was introduced in Europe in 1955 and arrived in America as a coupe in 1956. The convertible soon followed in 1958. It cost $300 to $400 more than the coupe, but was sportier to convertible-loving Americans, for whom it initially was built. The slick little car was sold through 1974. Sales totaled an impressive 387,975 cars. And it could have lasted several years longer, except that the Karmann coach works of West Germany needed more space to build Volkswagen's new Scirocco coupe, which lacked the Karmann-Ghia's flair.

This is a one owner from new purchased at Cameron Auto in Harrisburg, Pennsylvania on September 19, 1972 for $3,008.33 example with a replaced engine. Consigner's wife states her late husband replaced the engine as he wanted more power, however it is not known what size engine he installed and resides in this rear engine car. The engine currently does not run but does turn over.

Exterior
There appears to be a repaint in a darker version of the Olympic Blue poly. Paint is in fair condition with some dirt inclusions underneath the repaint. All chrome, and brite work is in excellent condition, shiny and no pitting. Even the dual chromed moldings below the belt line are original and in good condition. Interestingly the passenger wheel is chromed, as the remaining 3 are painted steel. Most likely this errant chromed wheel goes with the remaining 3 extra wheels and tires that will come with this car. No spare tire is present, or the 4th steel wheel. US specified all red large taillights and wrap around turn signals sit above a nicely rounded bumpers.

Interior
Black vinyl buckets which need a good cleaning and same for the carpets. All black even the dash with all original gauges, fronted by the original steering wheel. A typical VW shift lever is between the buckets. A small rear seat is available and flips down for extra space.

Drivetrain
What appears to be a very new and clean engine in a VW configuration is nestled into the rear of the car. Some extra polishing has been done to the transmission, and all tubing and wiring is in very good condition. As stated, the engine cranks but does not start or run. It is currently unknown what the issue is with that. A manual transmission is attached.

A one owner car from new, throw in some engine modifications in the form of a newer engine, give it a shot of repaint, and we have a straight, original chrome in good condition Karmann Ghia. Underside appears rust free, and typical engine bay rusting is nonexistent. A nice coupe from VW, with an Italian design, and a German Body builder. This car arrives to you with the original sales contract, original title and other factory documents as well as receipts for the maintenance performed on the car over the years. Also 3 additional chromed wheels with mounted tires. This solid example sat for many years in a garage and was just recently taken out and cleaned up. It should be fairly easy to get this one back on the road.


Classic Auto Mall is a 336,000-square foot classic and special interest automobile showroom, featuring over 150 vehicles for sale with showroom space for up to 1,000 vehicles. A 450 barn find collection is currently also on display.
This vehicle is in our showroom in Morgantown, Pennsylvania, conveniently located just 1-hour west of Philadelphia on the I-76 Pennsylvania Turnpike. The website is www.classicautomall.com and our phone number is (888) 227-0914. Please contact us anytime for more information or to come see the vehicle in person.