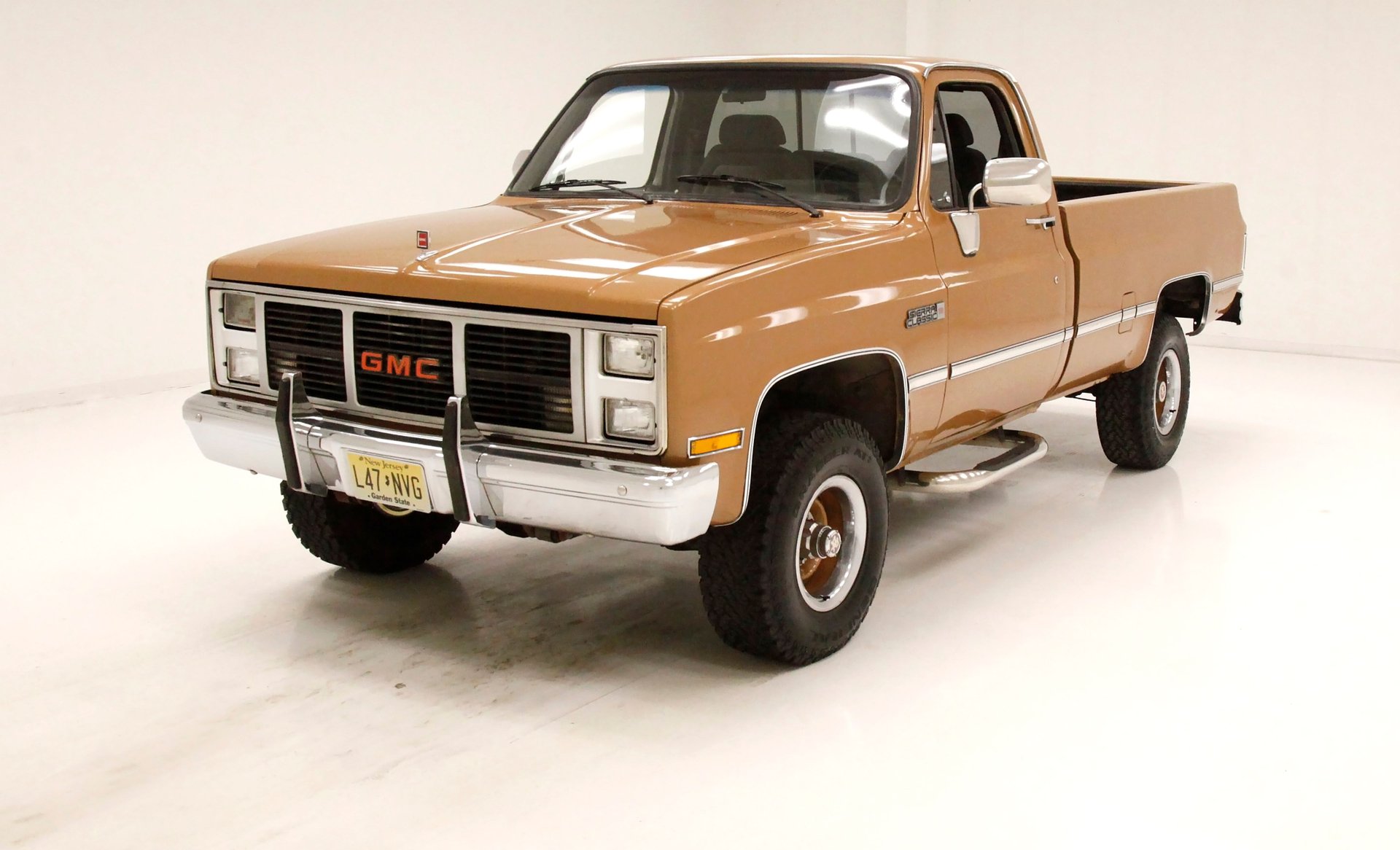 The third-generation C/K was introduced for the 1973 model year.  Designated the "Rounded Line" generation by General Motors, the C/K grew in size inside and out.  As pickup trucks increased in use as personal vehicles, cab features and options moved closer in line with GM sedans, (with power windows and power door locks becoming options).  To further expand its practicality, a four-door crew cab body was introduced, (offering 6-passenger seating).  While relatively straight-lined and boxy in appearance, leading to their "Square-body" nickname from the public the Rounded Line trucks were the first generation of the C/K to be designed with the use of computers and wind tunnels, optimizing the exterior shape for lower drag and improved fuel economy.

For consignment a third generation C/K line truck from 1987 now with a consignor stated all Jasper drivetrain with 10K miles on said drivetrain.  Lots of new metal, and some interior rebuilds with upgrades, it's a tall order with big shoes and straight steel.

Exterior
An all steel fleetside body which shows off rust free panels with nicely minded gaps covers this truck exterior and has been dipped in a coating of Gold that displays well, but not without a few runs in the clear coat application.  In front a simplified and effective front grille with vertical chromed central push bars growing from the chrome bumper, has the stacked square headlights on either side of the GMC badged egg crate grille.  Running towards the passenger compartment is a dent-less hood, a new passenger fender, and original doors with a large chromed mirror hanging off of either door.  New rockers are now on and are rust free.  The bed floor remains original, but all new box steel has been installed and all this is bathed in Gold.  Under the doors is a curved chromed rounded bar which serves as the step to get inside this high 4x4 truck.  Glass is all tinted and now surrounded by black trimmings.  A new rear bumper is on and is nice and shiny, with clear lights now inserted into this bumper.  This truck rides on 15 inch gold painted steel wheels with chromed central hubs and deep trim rings also in chrome.  These wheels are wrapped in 31 x 10.5R15 deep tread rubber all around. Let's git a little mud on those tires!

Interior
A swing of the doors complete with power window and lock toggles, all within a molded black plastic door panel. Some of the black is wearing off and revealing factory red underneath. The arm rest and storage pocket have some chrome delineations in these panels and faded gray carpeting fills the bottoms of the doors.  Inside three broadcloth bucket seats, ( 2 wide on either side), and a central small seat between them.  These seats are newer and have custom lumbar electric actuated supports, massage capabilities and are also heated.  These are two tone charcoal gray with lighter tuck and roll inserts.  The dash is newer with its wrap around brushed aluminum front panel within which are round gauges and chromed AC vents.  All remaining surrounds and dash top are very nice and in padded black vinyl, however show some wear.  This truck has cruise control, and a 10 disc CD changer behind the seats.  To blast sound it also sports a 240W power booster under the center seat.  No radio is installed anymore due to the CD player belting out tunes.  A tilt wheel looks like new as are the gray carpets and headliner.  In the upper center are dual track style spotlights to aid in the map reading at night.  Paint wear off and some scratches are noted on the dash at various areas.

Drivetrain
A flip of the hood and we greet the heart(beat) of the matter,(and America!) with a 350ci  consigner stated Jasper crate motor.  This is fed by TBI EFI and has a 4-speed consigner stated Jasper 700R4 automatic transmission on back.  Also he states the transfer case is Jasper although no paperwork backs this up.  Plenty of patina and some spotty rusting is present throughout the engine bay.

Undercarriage
Some heavy rust is noted in the leaf springs and brake drum cases.  Invasive rust is noted on the bed supports with some rotting away at the edges.  Rustproofing has seen better days with lots of patina, fading and underlying rust on the framing and bed underside.  A newer rear pumpkin is on, and it's a 10 bolt version.  Also a new fuel tank has been installed.  Power disc brakes are on front, and on back are power drums.

Drive-Ability
I climbed inside and took advantage of the seat massager and belted the tunes through the CD player using a remote control.  It drove sufficiently, handled nicely and I could sum it up by saying it's been well worn with some wear, but all was in working condition during my test drive.

Some new parts, a consigner stated Jasper drivetrain, and gold respray sum up this 4x4 version from 1987.  It has some undercarriage rust issues, but puts on a good air.

Classic Auto Mall is a 336,000-square foot classic and special interest automobile showroom, featuring over 850 vehicles for sale with showroom space for up to 1,000 vehicles. Also, a 400 vehicle barn find collection is on display. This vehicle is located in our showroom in Morgantown, Pennsylvania, conveniently located just 1-hour west of Philadelphia on the I-76 Pennsylvania Turnpike. The website is www.classicautomall.com and our phone number is (888) 227-0914. Please contact us anytime for more information or to come see the vehicle in person.