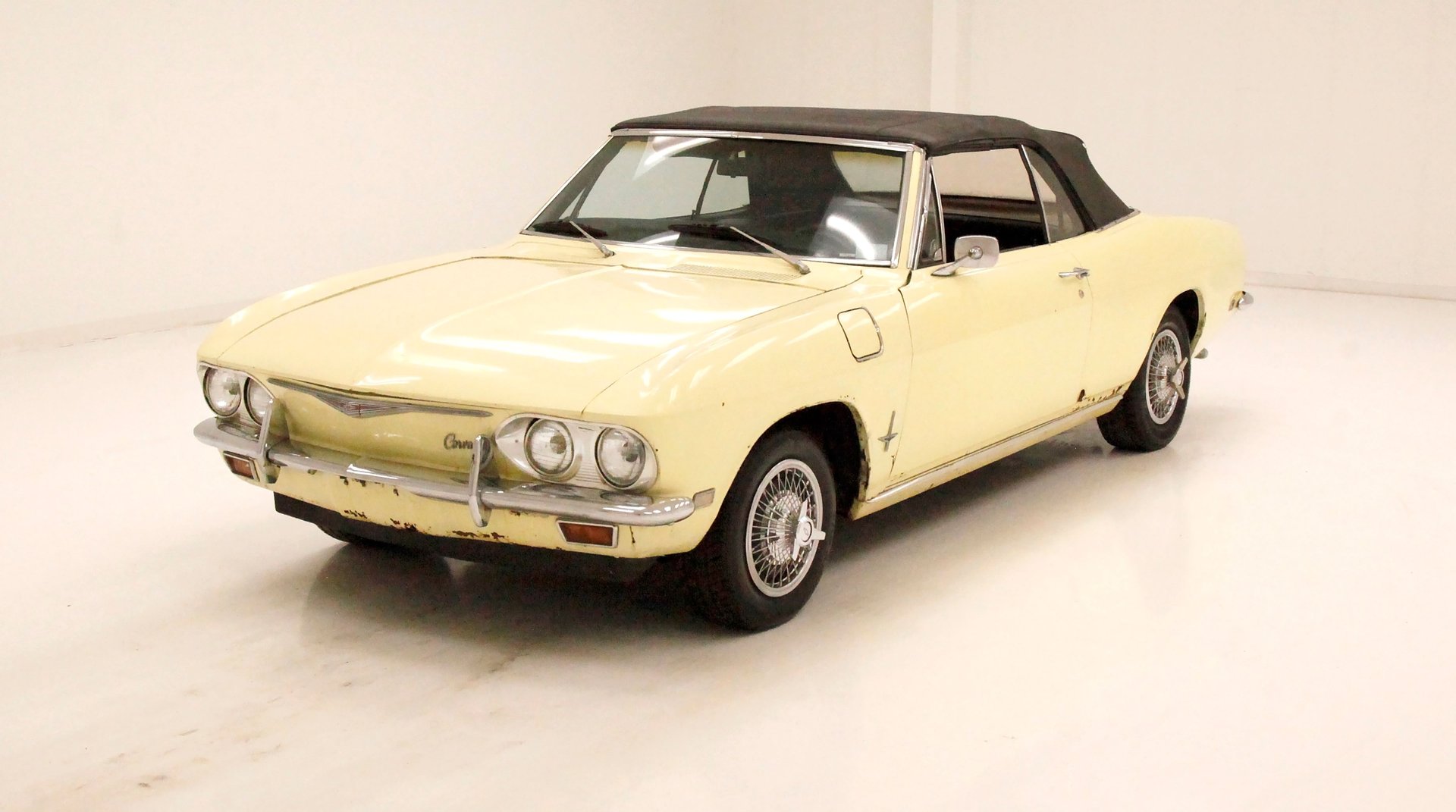 Until the 1950s, most American auto manufacturers made one size of car: large.  Imports from Europe such as Volkswagen, Renault, and Fiat showed that there was a market in the U.S. for smaller cars, mostly as a second car or an alternative for the budget-minded.  Led by General Manager Edward N. Cole, Chevrolet designed a revolutionary new car.  It was powered by an air-cooled horizontal six-cylinder engine made almost entirely out of aluminum.  The engine was mounted in the rear of the car, driving the rear wheels through a compact automatic transaxle.  Suspension was independent at all four wheels.  There was no conventional frame; it was the first unibody built by Fisher Body and the styling was unconventional for Detroit, subtle and elegant, with no tail fins or chrome grille.

This Monza Corvair is a consignor described “project car”, and albeit a big one!  It has a 164ci flat 6 cylinder engine which our consignor states starts every time and has had some work done to it.  Other parts come with the car, (see one of our sales specialist for complete list), and it will need some major TLC to be brought back up to snuff.  There are plenty of areas of invasive rust, rust bubbling and surface rust throughout this exterior of the car.  The interior is in a beginning state of restoration and will also require plenty of attention, only after structural unibody issues are thoroughly addressed.

Exterior
A previous respray of Butternut Yellow drapes the exterior of this sporty air cooled car.  There are many areas of scratching, chipping and a few dents and dings, and plenty of invasive rust throughout.  Chrome is fair with loss of shine and dimpling creeping in.  A black padded canvas convertible top moves up and down, however has some rips and tears, particularly along the cloudy plastic window surround areas.  Shiny chromed wire wheel covers with faux knockoff hubs are wrapped in black wall tires circa the last century.

Interior
Looking good for the door panels, and front buckets and rear bench.  These look to have been completed, and show as originals once did.  The floors have plenty of surface rust and no carpeting.  The dash is in a state of initial wiring with no gauges or electronics as well as any knobs or pull functions.  A rally steering wheel is attached.

Drivetrain
This car came with a 164ci flat 6 cylinder and it is not known if this one is original to this car.  The consigner states this runs although our efforts which included a jump pack, starting fluid, and some tinkering were rendered useless for getting to actually run.  A 2-speed Powerglide automatic is bolted to the mill and a 3.55 geared axle puts the power to the pavement.

Undercarriage
The unibody and undercarriage has many areas of surface rust, and the rockers are suffering from structural damage particularly near and around the wheel wells.  All independent coil spring suspension is on, and drum braking is for all the corners.

Drive-Ability
While the car not start for my test drive, and needs plenty of interior work to actually drive safely, our consignor states the car starts every time.  No test drive was administered.

Innovative for its time, rear engine, unibody construction, smaller more compact car, and the Monza upgrade, wheel this car in your garage and start the work.  When it rolls out you'll be the proud owner of a classic like none other of its time.