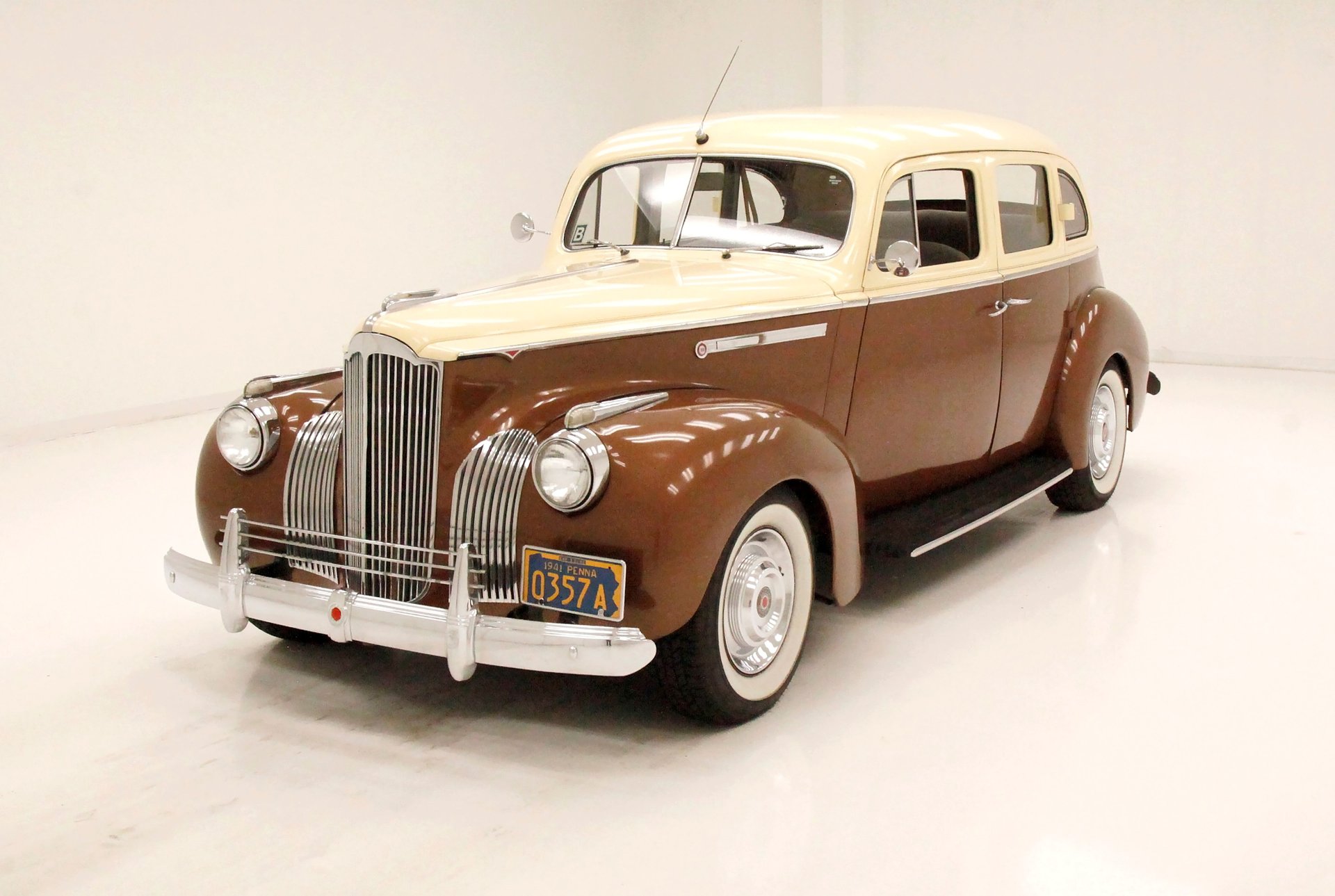 The Packard Eighteenth Series One-Ten was a range of six-cylinder automobiles produced by the Packard Motor Car Company of Detroit, Michigan during the 1940 and 1941 model years.  The One-Ten designation was renamed from the previous Packard Fifteenth Series Six (115-C). The One-Ten shared the wheelbase of the One-Twenty but was given the One-Ten designation to indicate it was the entry level product.  Packard reintroduced a line of six-cylinder cars in 1937 after a ten-year absence as a response to the economic depression and ongoing recovery cycle in the United States.  As an independent automaker, Packard could not look to other internal divisions to support its luxury models, so the inclusion of the Six, and the later One-Ten, was necessary to aid in supporting the firm's bottom line until better times returned.  Critics of the Packard Six and One-Ten have long maintained they hurt Packard's reputation of being America's premier luxury marque.  Still, the reintroduction of the Six could not have come at a better time for the automaker, just prior to the nation's 1938 economic depression.

For consignment, an answer to the depression era in the form of the Packard 110 from 1941.  This car can do a road rally, show up at the club in style, or just cruise down the highway all day at 55+.  It looks great outside, although the consignor states it needs some TLC on the interior.  Read on!

Exterior
Like my morning cup of coffee I see cinnamon lowers and cream uppers on this long steel bodied car, and this was their basic offering due to the depression.  Not unlike the Isetta did for BMW, those 110 brought the company back from the brink of bankruptcy.  A very tasteful design though, in that it has the rich vertical tall grille and V shaped hood which is in the cream paint.  Flanking the main grille are dual smaller vertical ribbed elongated oval grille which emulate the curve of the front fenders and float above the bumper.  The cinnamon takes over and bathes these curvaceous front fenders that sport a single headlight and rocket trail-esque turn signal light and long trim behind it.  The fenders eventually melt into a running board, and eventually the smaller protruding rear fenders.  Body work metal shows some scratching, dents and dings and slight rust on the scratched metal parts. The front windshield is a split window version and doors share a common B pillar for their latches, making the rear doors suicide doors.  The “humpback” tail has the lid handle and a slightly body emulating curved rear bumper.  Chromed dog dish style wheel coverings are wrapped in slightly wide whites to add a touch of class for the plebes.

Interior
Here we see broadcloth door panels in gray which are slightly soiled.  A front bench is the same, in the gray broadcloth as is the grandmother's couch like rear bench with lots-o-legroom.  A faux wood grain painted dash is housing the instruments which are nicely warmed by bakelite trimmings in caramel, (which I also like to put into my coffee), and art deco styled instrumentation.  Bakelite caramel covered square knobbed pulls are below the speedo, and more ribbed bakelite is in the center for the radio speaker vertical grid.  This grid looks like it was chewed by an intrusive squirrel, (even though that's doubtful), and does show as damaged.  An aftermarket toggle and single instrument hangs below this factory dash.  In front of the passenger is more caramel horizontal ribbed trimming with a central clock and faux wood grained metal glovebox door.  The rear passengers are treated to slightly upgraded vertical ribbed gray broadcloth doors with shiny cranks and actuators.  Gray carpeting covers the floors and there is a foldout footrest for the rear passengers to stretch it out during the ride.  An aged cream mohair headliner is above and shows no tears.

Drivetrain
Under the hood is a completely restored 248ci flathead inline 6 cylinder green painted meanie.   It's original to this car and has a 1-barrel carburetor feeding it from the side.  Also an original 3-speed manual transmission is bolted to the back, and way back is the rear axle weighing in at 4.30.  All good under this hood.

Undercarriage
A full coating of surface rust is underneath this X framed car but no invasive rust or structural problems are noted.  The front suspension is independent coil springs and the rear is leaf springs with air shocks.  Drum braking is all around and a single stock exhaust is underneath.

Drive-Ability
A quick starter, and a good driver.  I cannot say enough about the smooth ride, and a few frowns are noted.  Mainly the radio was not working, as was the speedo, and there are minor exhaust leaks noted.

A Packard for the masses if you will, this one still holding up well, and I found the interior to be not quite as bad as the consignor led me to believe.  So I'll give an overall good condition, and thumbs up to early 40 style and grace.