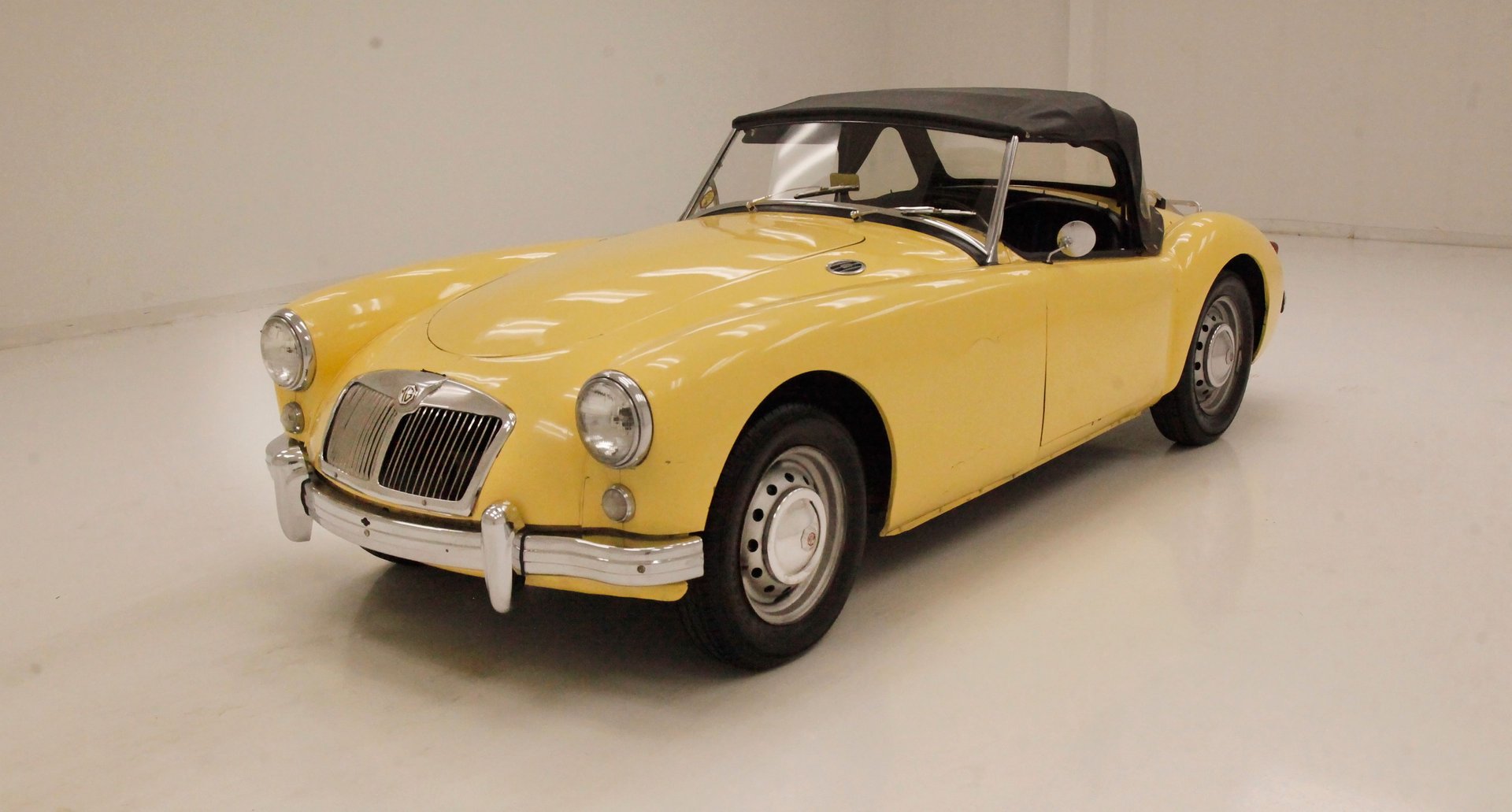 The MGA is a sports car that was produced by MG from 1955 until 1962.  The MGA replaced the MG TF 1500 Midget and represented a complete styling break from MG's earlier sports cars.  Announced on 26 September 1955 the car was officially launched at the Frankfurt Motor Show.  A total of 101,081 units were marketed through the end of production in July 1962, the vast majority of which were exported. 5869 cars were sold on the home market, and the MGA was replaced by the MGB.  A new chassis was designed with the side members further apart and the floor attached to the bottom rather than the top of the frame sections.  A prototype was built and shown to the BMC chairman Leonard Lord.  He turned down the idea of producing the new car as he had just signed a deal with Donald Healey to produce Austin-Healey cars two weeks before.  Falling sales of the traditional MG models caused a change of heart, and the car, initially to be called the UA-series, was brought back.  As it was so different from the older MG models it was called the MGA, the "first of a new line" to quote the contemporary advertising.  There was also a new engine available, therefore the car did not have the originally intended XPAG unit but was fitted with the BMC B-series engine allowing a lower bonnet line.  The MGA convertible had no exterior door handles, however the coupe had door handles.

For consignment, a former midwest show winner now showing its age but still a fast fun driver, all in 1959 MGA form.  All correct, side curtains, nice convertible, a wonderfully tasteful interior coloring accenting the pale yellow exterior, and 1959 never looked so good!

Exterior
The MGA was a big step forward for the British automaker and somewhat shocking to MG fans around the globe.  Our example, the final year for the MGA 1500, continued to stun crowds with its persuasive yet delicate flowing lines all bathed in an older application of pale yellow that is showing its age with various cracks, dents, and areas of body repair.  Starting up front with the raked back waterfall style grille which melts its way into the rounded peak fenders with their chrome bezel headlights.  Just below this steel and chrome artwork is a clean bumper with added bumperettes.  Moving down the sides, a swooping body line melts into the highly arched rear fenders creating a soft Vee shape that keeps eyes drawn and hearts pounding.  These sides, devoid of all chrome and trimmings, achieve artistic perfection with the sculpted lines as they frame the restored gray drilled wheels and blackwall rubber.  A black vinyl top with clear plastic windows and additional side curtains are present and accounted for in case you hit a spot of inclement weather.  We do note areas of repair stitching in the top material just above the rear side windows.  On the back is the rear curved bumper stretching from fender to fender with its near perfect bumperettes, oval tail lights, and chrome luggage rack just above the trunk lid.

Interior
Reaching in and pulling the door release strap we are greeted with a bit of unexpected niceties in the form of black leather tuck and roll low back bomber style bucket seats with a hint of wrinkling to the upholstrey and the handbrake tucked neatly between the passenger's seat and center hump.  An eyebrow curved dash, also draped in black sports a litany of gauges which pepper a black leather curved panel along with the heater controls, bright radio speaker grille and MG badge over wood in front of the passenger.  This is fronted by a laminate wood rimmed drilled 3 spoke steering wheel.  Black leather covers the simple small doors, and each offers up some pouch storage and the chromed retainers for the side curtains.  We note some wear and tearing on the door panels as well as a huge display of MG shows this car has attended during its Midwest show days.  Deep black carpeting with wear on the thresholds floods the floors and a rear storage area all looking so inviting and beckoning me to feel its softness.

Drivetrain
A flip of the long swooping hood reveals a nicely restored 4-cylinder red painted engine block in 1489cc configuration.  This mill is fed by 2 SU's which are semi downdraft carburetors.  There is a 4-speed manual transmission attached to the back and a 4.30 rear axle way in back.  The engine bay is very well done with just a light dust coating of patina.

Undercarriage
All straight structural steel is underneath, and makes up a clean undercarriage displaying just minor road dirt, patina and some surface rust.  The floor pans are strong and solid with factory undercoating applied, meanwhile the side rockers and unibody are nearly like new.  For the suspension, independent coil springs are up front, and leaf springs for the back and drum brakes front and rear are on for the whoa factor.

Drive-Ability
I never miss a chance to pilot a British sports car and this one spoke to me dearly as it's the second of its kind to ever grace our Hallowed Halls.  A quick starter although the starter pull is tends be a touch difficult to engage, and after a nice warmup it ran incredibly smoothly and had great snappy pickup.  It handled well and just the open road feel of this car is worth the price of admission.  All was working swimmingly and my suspicions were correct, the deep plush black carpeting felt wonderful.

An older restoration job holding up just well today, this car presents in nice shape as a driver but in need of TLC on the body to bring it back to show winner status.  It has a beautiful look with the pale yellow paint, and black vinyl top with the luxurious black hued leather interior.  Mechanically it is sound, and we are talking about a Brit from 1959, priced very fair for today's market.  So leave the cell phone at home, send the kids to the neighbors and spend some much needed time in your own get-away car.