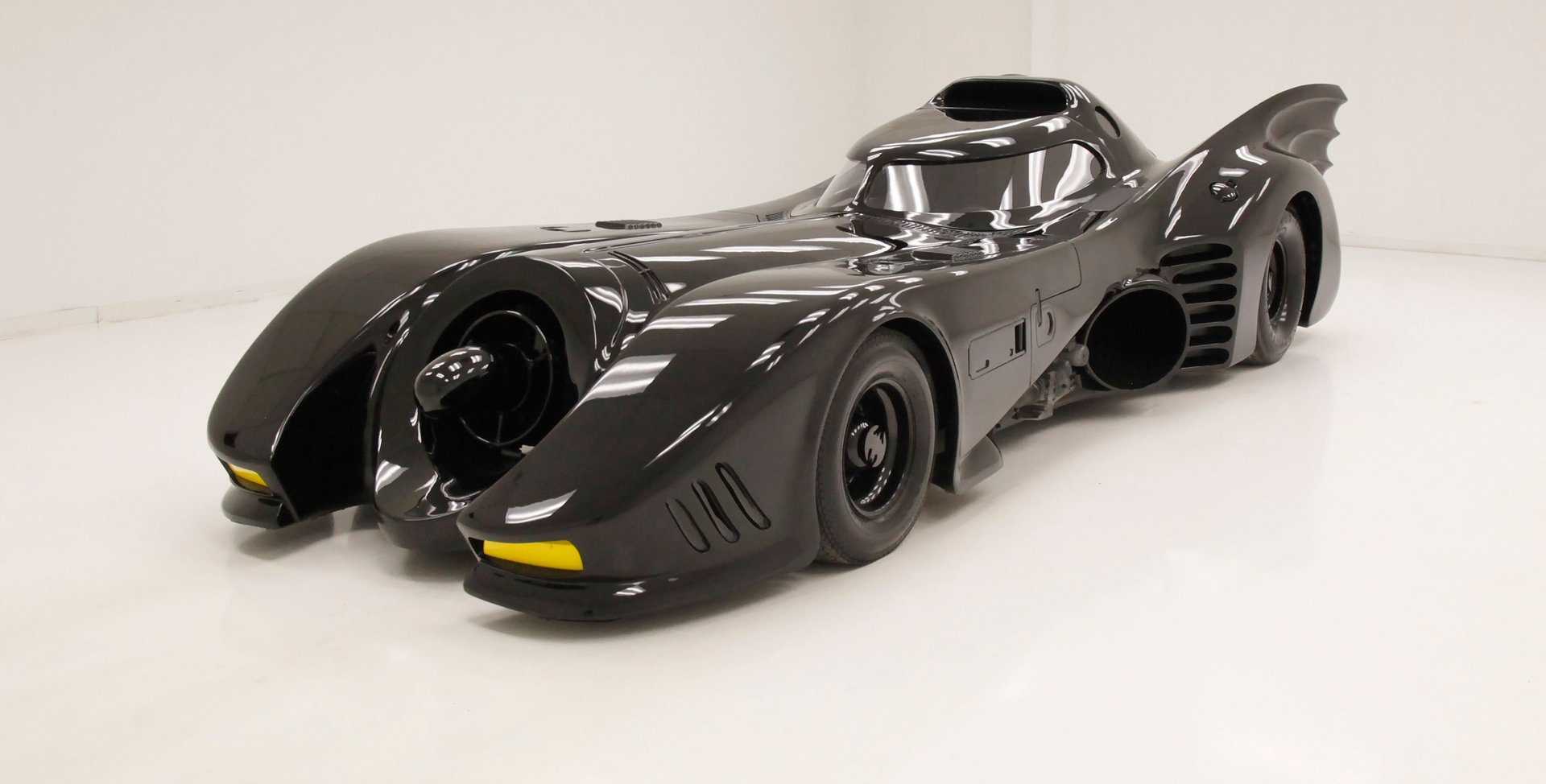 An instantly recognizable one word theme song, outrageous death traps, ingenious gadgets, an army of dastardly villains and femme fatales, and a pop-culture phenomenon unmatched for generations. James Bond, right? Wrong. 1966's Batman television series practically defined the comic book adaptation for the next three decades with its distinctive visual flair and parade of celebrity guests, even as it walked the line between loving adaptation and straight-up parody. POW!


Gracing our main showroom and now offered for consignment, the incredible opportunity to become the proud owner of this extremely rare and equally as phenomenal Number 1 Six Flags Batmobile. While not used in ANY of the Batman movies and not street legal, its popularity stems from the Six Flags Batman Stunt Show. Always drawing an ear piercing roar of applause during its stunt show from the ever enthusiastic crowd to nearly the same applause mixed with ooohhhs and aaahhhs from the guests of our Hallowed Halls. This strikingly designed and very popular custom build was designed with a hidden stunt driver compartment behind the cockpit, (more on this later), and certainly produces the illusion of the car being driverless as it roared around the stunt show as a voice controlled masterpiece. Remaining environmentally friendly, with its 48v DC drivetrain and functional flame thrower built into the "exhaust", its hard for the Jones' to be able to keep up with this one. ZAP!

* Please Note: NO TITLE-SOLD ON A BILL OF SALE ONLY*
Exterior
All specially molded fiberglass borrows from many iconic cars and blends them all together to produce this exotic car that almost perfectly replicates the car from the first 2 Batman movies. A far cry from the original George Barris creation from 1966. The nose of this machine has fenders of a Daytona Prototype racer, however reality ends there with a large central British Harrier jet engine turbine plopped in the center. The thin long hood cozies up to more race car styling with a wraparound window, closed cockpit design, that accommodates the 3 passengers, yes 3...more on that later. The roof has a large air scoop, and the entire cockpit finds itself firmly planted between two bat styled fins that not only would make a 59 Caddy green with envy but give the perfect allure of speed. The side panels sport various fiberglass undulations, more air intakes, and some authentic metal "steampunk" add ons to make it look like it goes really fast. Out back, a central turbine exhaust sits between the stepped and louvered fins and yes it is fully functional. All this fantasyland of fiberglass sits on custom 15-inch wheels wrapped with Mickey Thompson rubber. The bat phone has rung, the superhero outfits have been donned, and we are off to fight crime in Gotham City. Thanks Alfred.

Interior
A press of a button and the fighter cockpit style canopy slides forward to allow access for my crack decoder and myself. Under that enclosed cockpit shell is a virtual fantasy land, (literally) of buttons, levers, lights, control panels and an overabundance of nonfunctional bells and whistles. One would honestly think they were in the cockpit of a fighter jet moreso than a "car" if they were to wake up in either passenger seat. The actual driver seat is behind a secret black velcro in screen elevated above the front buckets where the real driver sits. All part of the fantasy, however, I fancy myself a Clooney Batman, rather than the Keaton version.

Drivetrain
The KISS theory for the drive train which consists of a battery powered 48V system complete with a kill switch hidden within the "drivers' side" rear wing fin, and could be flipped by a film crew member should any issues arise during the stunt show. There is a working flamethrower, (no I didn't allow my crack decoder to grill hotdogs behind the car), independent with airbags front suspension and a 4 link with more bags for the rear. Speaking of which, on the rear its a 10-bolt version. " Holy hooks Batman".

Driveability
With a consignor stated top speed of approximately 25-30mph this Batmobile isn't going to break land-speed records racing around Gotham City. And due to the batteries having not been charged since approximately 1993 we didn't want to risk a failure or fire.

Here is your opportunity to be the ONLY PERSON on your block to have one of these. It's electric and has the hidden driver aspect. The exterior is literally "bat shit crazy cool" as to its curvaceous steampunked black fiberglass construction that borrows from racing and a few classics, has several drops of psychedelics peppered within, and is one of a kind. Come view this one of a kind mammoth mammal at Classic Auto Mall...same Bat Time, same Bat Channel!


Classic Auto Mall is a 336,000-square foot classic and special interest automobile showroom, featuring over 650 vehicles for sale with showroom space for up to 1,000 vehicles. Also, a 400 vehicle barn find collection is on display.
This vehicle is located in our showroom in Morgantown, Pennsylvania, conveniently located just 1-hour west of Philadelphia on the I-76 Pennsylvania Turnpike. The website is www.classicautomall.com and our phone number is (888) 227-0914. Please contact us anytime for more information or to come see the vehicle in person.