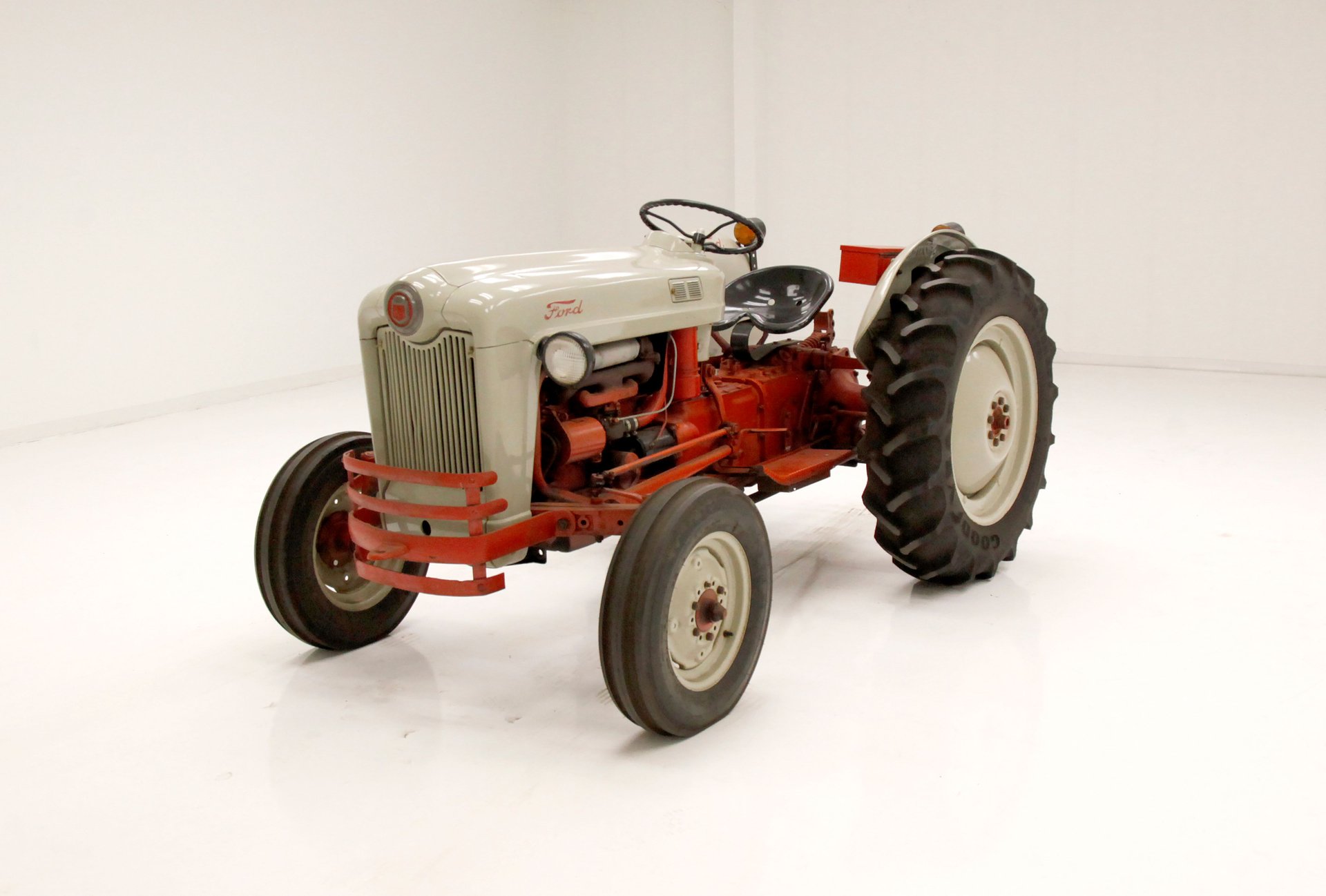 The Ford NAA tractor, (also known as the Ford NAA), is a tractor that was introduced by Ford as an entirely new model in 1953 and dubbed the Golden Jubilee. The NAA designation was a reference to the first three digits of the serial number style used starting with this tractor. It was designed as a replacement for the Ford N-Series tractors. Larger than the 8N, the Golden Jubilee featured live hydraulics, a 50th-year Golden Jubilee badging, an overhead-valve "Red Tiger" four-cylinder engine and streamlined styling, but just as significantly, it was the first tractor Ford built after losing its court battle with Harry Ferguson in 1952 over the patents the Irish inventor held on the Ferguson System 3-point hitch system.

For consignment a fully restored and as just as fine as they come, and cosmetically nearly perfect '54 Ford NAA. It is powered with a gasoline 4-cylinder engine and has plenty of power to plow or would make a wonderful museum piece.

* Please Note: NO TITLE-SOLD ON A BILL OF SALE ONLY*

Exterior
Bathed in correct Medium Gray and Vermillion Red with not a hint of rust, all panels have been fashioned to fit perfectly and with the cowl-less engine bay, reveals the engine and gives the owner the ability to do some wrenching. A front spread wheel setup gives much better stability than a row crop tractor but caution must be taken as not to crush any precious plants. Gray painted wheels are wrapped in newer tractor front tires, and with the lack of front suspension slow speeds are encouraged. As we move back, the farmers seat area has all the controls within arms reach including a centrally mounted steering wheel and gauge cluster complete with a tachometer/hour meter and supporting gauges. On the floor is the shifter and to the left and right of the seat are various levers for controls, meanwhile brake control pedals are on the floor as well. Large curved fenders protect the driver from the rear Vee treaded tires along with more large gray painted wheels and a pair of industrial style tail lights adorn the rear of the fender along with the hitch, PTO output and partial plow assembly. All of the pedals and controls move freely, and steering can turn the wheels with the best of them.

Drivetrain
A Ford liquid cooled 4 stroke gasoline engine sits under the cowl and shows in 134ci format making 32hp. This engine is an electric start model and does turn over by hand but no attempt to start it was made. The transmission is a 4 gear forward and 1 reverse type and affords a top speed in forward of 13.2mph, respectable for a 2,800lb machine.

A wonderfully restored to museum quality piece and a finer example would be hard to find. Real farming history here, from the beginnings of when Ford was making its own tractors, when competition was fierce, and loyalty among farmers was even greater.


Classic Auto Mall is a 336,000-square foot classic and special interest automobile showroom, featuring over 650 vehicles for sale with showroom space for up to 1,000 vehicles. Also, a 400 vehicle barn find collection is on display.
This vehicle is located in our showroom in Morgantown, Pennsylvania, conveniently located just 1-hour west of Philadelphia on the I-76 Pennsylvania Turnpike. The website is www.classicautomall.com and our phone number is (888) 227-0914. Please contact us anytime for more information or to come see the vehicle in person.