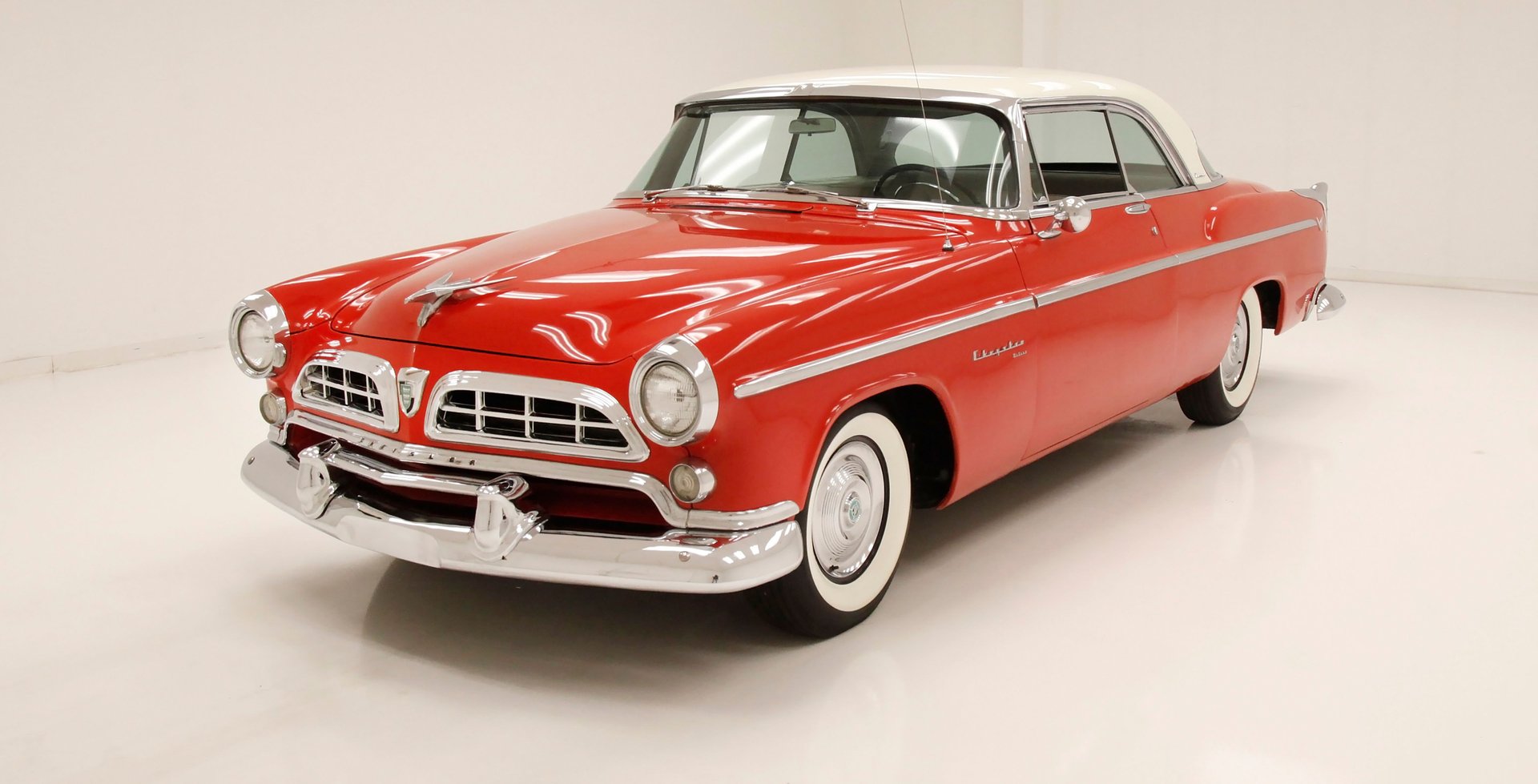 For consignment, the Nassau Deluxe, which offers great Exner styling, a hardtop body style, and a 301-cubic-inch V8. This 1955 Chrysler Windsor Nassau Deluxe remains largely original, other than a repaint, and would make for a great cruiser and about-town car.

Exterior
Styled by Virgil Exner and his team, Chrysler had now positioned itself at the forefront of the industry. The new look began with an all new big split egg crate grille set below lowered front fenders and hood lines and boasting heavy chrome. Wraparound 'Super Scenic' windshields were also a first for Chrysler and body sides were smooth with few feature lines except for the simple trim spear and the tall chrome encased 'Twin Tower' taillights. The rear window is also a wraparound style and has a nice downward curve to the trunk. Plenty of chrome on this car, and it all presents in fair condition, with some spotty pitting and dulling but this is mostly reserved for the chrome covered pot metal pieces. Exterior paint in red is good and covering the roof above the expansive greenhouse is a white roof. There is some hazing to the paint finish along with a few inclusions but mostly remaining shiny. All badging is present and accounted for and we note the optional reverse lights in their chrome bezels hanging just above the shiny chrome rear bumper. Wide whitewalls are wrapping the 15" steel wheels with full size standard issue Chrysler wheel covers.

Interior
Looking inside we are met with tri-tone door panels. These are covered with leather patterned light gray vinyl and are bordered above and below by white vinyl and black carpet respectively. A fine mix for the seats with all broadcloth weave cushions in light gray and ivory white bolsters in vinyl. Nice light gray piping surrounds the seats, which are a split back bench in front and a full bench in the rear. Carpeting is a nicely preserved black and floods all the floors. Upfront is a wonderfully curved downward dash, featuring a black padded topper and a white full metal jacket face with more plentiful chrome trim accents throughout. The placement of the transmission selector, dubbed the 'Fingertip' PowerFlite range selector, is now located on the instrument panel rather than in the standard steering column position. A lineup of stove style round knobs with chromed turns is above the factory AM radio. Some gauges show corrosion at the bezel surround where it meets the glass as does some of the chrome trimmings. The original steering wheel with its black rim and full horn ring and shines brightly in front of the dash and the headliner of gray broadcloth is clean and tight.

Drivetrain
A 301ci Poly engine in V8 form is within the well restored engine bay, The engine is believed to be original to this car, and presents well with its silver block, intake, valve covers and black air cleaner assembly. A single 2-barrel carburetor is on top and a 2-speed automatic Powerflite transmission is on back sending power back to a 3.54 geared rear axle.

Undercarriage
Plenty of surface rust abounds under here, however it appears to be structurally sound. Body hangers have surface rust, as are the inside of the exterior rockers, but it is not invasive unlike the flooring. The flooring has suffered from many areas of invasive rust and has been amateurly patched from above with galvanized sheeting. Not aesthetically pleasing, but functional for the time being. Power drum brakes are on all 4 corners and providing the signature Chrysler ride is an independent coil spring front suspension and a traditional leaf spring arrangement in the rear.

Drive-Ability
Starts quickly, runs smoothly, and a nice ride. All gauges were working, as were function knobs in the dash. A little creaky in the turns along with some body roll but it isn't a Ferrari, and it is 67 years old.

This car can be driven right out of Classic Auto Mall, and enjoyed, or taken to the next level with the restoration. Overall, a very nice interior, the engine runs smoothly and looks just fab, and the exterior is oozing 50's style with the 2-tone paint scheme and gobs of glorious chrome. What's your fancy?