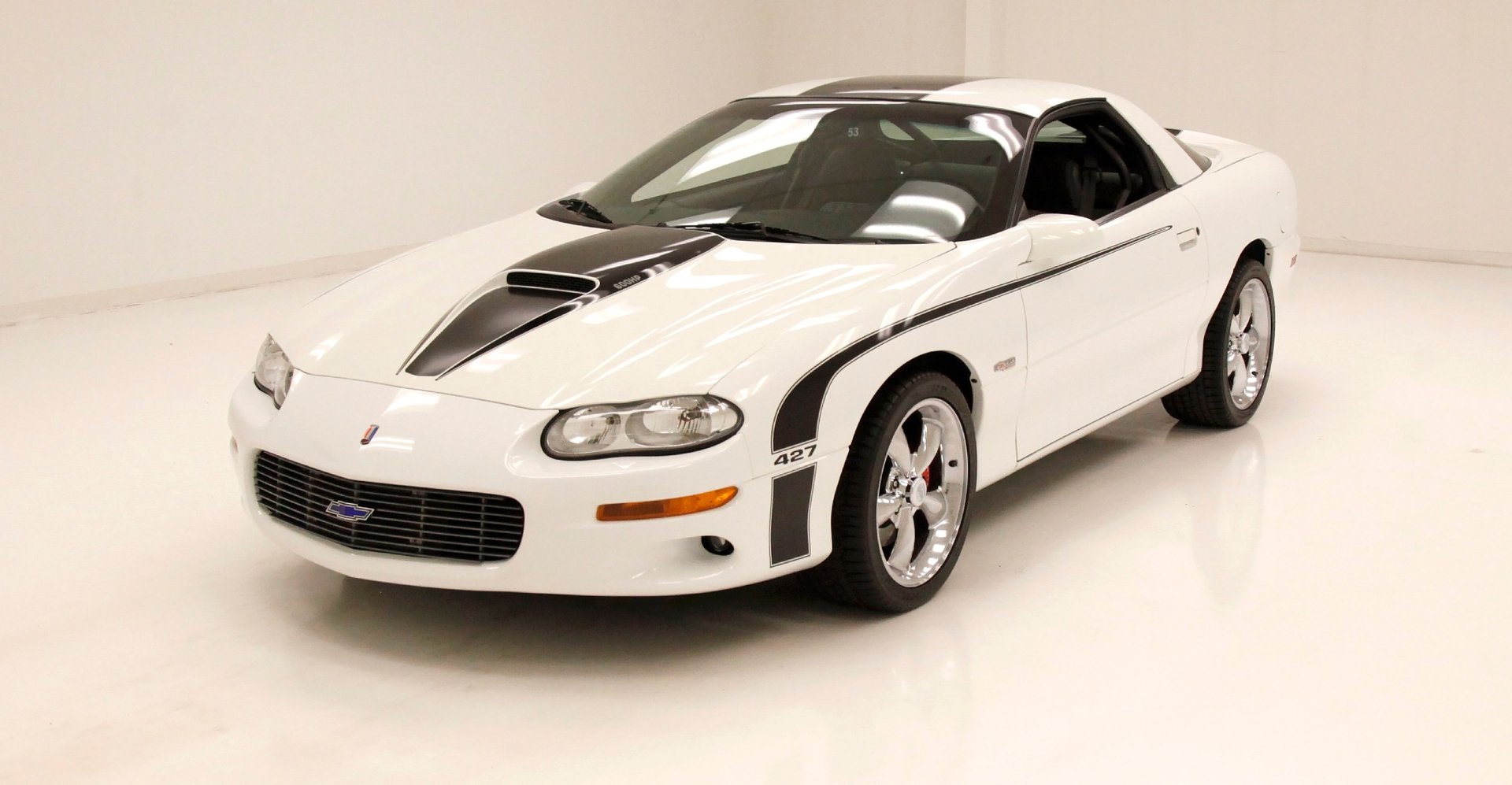 Arguably the most desirable Camaro of all time is the 1969 COPO 9560 ZL-1, 69 of which were built. A groundswell effort developed in the early 2000's to convince Chevrolet to build a new generation ZL-1, but it soon became clear the company had no interest in doing so. In stepped GMMG, Inc., builders of the Dale Earnhardt “Intimidator” SS and other specialty performance Camaros. They built a prototype using a slightly modified 400 horsepower LS6 Corvette engine and Z06 clutch assembly and replacing the brakes also using Z06 components. Suspension modifications included Penske adjustable coilovers, Eibach lowering springs, larger sway bars and modified link geometry. The finished prototype impressed those who saw and drove it, including several owners of original ZL-1 Camaros, whom GMMG had consulted on the project. he car was packaged in three “Phases” in keeping with sixties nomenclature, the main criteria being the choice of engine specification. Phases I and II featured 400- and 475-HP versions of the 350CI LS6 V-8; the Phase III version incorporated a 427CI LS6 powerhouse built to deliver 600hp. Fully thirty-one of the GMMG-built ZR-1 Camaros were Phase III cars. Twelve Chevrolet dealerships signed on to accept the run of 69 cars announced by GMMG, and the first cars were unveiled during a special gathering attended by, among other ZL-1 luminaries, Helen Gibb, who received car # 3. -Thx to Amercianmusclecarmuseum.com

In the late 60's & early 70's General Motors shipped a few 'special edition' cars out the side door of GM because management didn't want these cars on the street. They were called COPO cars. Typically they were '427' stripped down, 'go-fast' cars. Companies like Berger; Nickey & Yenko were in the middle & increased the performance on a very limited number of Camaro's, Chevelle's & Nova's. Then the malaise years fell upon the US auto manufacturers, with rising insurance rates, federal mandates and the EPA choking the life out of muscle cars, most everyone felt the end had come. Not so fast there sparky, fast forward to 2002 and while the boys at GM were turning out some righteous modern muscle of their own, the real super cars were done behind closed doors. Enter GMMG who took it upon themselves to concoct a true throwback to the famous Camaro's from 1969. Presented to you for consignment, 1 of the 69 GMMG Camaros from the semi-final year for the long lived Camaro. This car is #53 and this alone should have you drooling and clearing space in your garage, but we can break this car down further...how about 1 of 31 wearing the Phase III package equipped cars. Add in all of the factory and GMMG paperwork and a mere 3,704 actual miles and this IS a true collectable Camaro that is capable of kicking ass on the strip or standing out from the crowd in the show field. Read on muscle lovers....and here's a napkin and dribble bib, you have a bit of drool hanging from your chin.

Exterior
This car screams performance sitting still and is clad with Phase III decal options with it all bathed in Arctic White. The front grille is slightly modified with billet horizontal bars and a bright blue bowtie dead center to let the world know you've arrived. A single wide black accent stripe starts at the front of the hood and slowly grows as it moves back over the SS style hood before stopping short at the base of the heavily raked windshield. A well hidden call out of "600hp" resides near the front of the scoop ready to scare off most challengers. All ZL1 cars were B4C coupes, that means no T-tops on the roof, just a fully fixed roof where the accent stripe picks back up and races rearward to the sloping rear deck. On the sides straight steel with well minded gaps creates the front and rear quarters badged with ZL1 Supercar badges on the front quarters and a throwback hockey stick stripe in black starting at the front of the fenders and holding a 427 call out front and center. The wide stripe continues on the rear deck where there is a aerodynamic spoiler that is very low profile. A blacked out filler panel rests between the tail lights and holds correct chrome lettering spelling out CAMARO as well as a GMMG badge and a tribute to Fred Gibb and Vince Piggins above. 18x9.5 inch chrome Cragar wheels are on all 4 corners and are wrapped in newer blackwall rubber. Large dual exhaust tips peek out from under the body matching neoprene bumper. All paint is at the deep end of the pool and looks nearly perfect throughout.

Interior
If you thought the exterior was something to crow about, take a look at this retro interior. A swing of the sexy doors and we get loads of Ebony molded smooth vinyl, integrated door pulls with a matching ebony actuator and plenty of power toggles to play with. Inside a 6 point rollbar, (GMMG installed), protects the passengers while they enjoy the Ebony leather bolsters and white houndstooth cloth inserts in the front body hugging bucket seats. A center console undulates by these buckets and houses the short throw shifter with its Hurst topper ball. Shoehorned in back are two more molded in leather and houndstooth buckets with not a lot of legroom, but they are there. The center of the dash rises to the occasion with a Monsoon premium sound system including an AM/FM/CD stereo, climate controls, and a specifications plaque. A beautifully and gracefully arched dash top in front of the driver has all the essential gauges and warnings should something go awry during your performance drive. These are silver faced, providing nice contrast and wear the ZL1 Supercar logo. Like new Ebony carpeting floods the floors and is protected by color matching carpeted mats, meanwhile up top is a clean black felted headliner. Of note, the "top" switch on front of the console does not control a top at all. Rather it controls the GMMG electric exhaust cutout, perfect for racing or to make your entrance know....from 3 miles away.

Drivetrain
Still not sitting in a puddle of your own spittle? This is where things get serious in a big way, 427 cubes of them actually. A 7.0 LS6 V8 sits between the fenders and is looking as good as the day it was installed. This C5R race case been treated to the best of the best with a Callies 4340 forged steel crank with a 4.0" stroke, Callies billet forged steel rods with ARP fasteners, JE pistons with ultra-precision machining and certification, a custom hydraulic roller camshaft for the Phase III engine, and an ATI crank damper. Cometic head gaskets seal the CNC ported LS6 cylinder heads with 2.055" and 1.600" valves which are actuated by Comp 4130 steel pushrods. Up top a Holley aluminum intake manifold which has been modified by Wilson Manifolds is fed copious amounts of fuel and air through a ported throttle body and high flow airbox. We note the engraving atop the intake to ensure that the right parts went into the right car. Connecting this special mill to the Tremec T56 6-speed manual transmission is a lightweight flywheel and out back is a 10 bolt Positraction rear axle weighing in with a 4.10 ratio. Pick your jaw off the floor, that's where your right foot belongs.

Undercarriage
This hits just keep coming with a beautifully preserved undercarriage with some black coating on the trunk floor behind the rear axle. All else is rust free finished in a grayish white hue and remaining like new and completely rust free save for the surface rust on the untreated suspension and driveline components. Phase III 1-7/8" headers rain down from the engine to meet a dual to single to dual exhaust which is looking just fab with the aforementioned electric cut out and twin chambered mufflers. How's that for retro? Handling is courtesy front independent suspension and rear is torque arm with coil springs with both being modified courtesy of Penske Racing 7500 series drag valved shocks and struts and Eibach 1.5" lowering springs. Corvette ZO6 power disc brakes with slotted rotors are on all 4 corners. I see you've soaked through the dribble bib...

Drive-Ability
Straws were drawn, coins were tossed and even a game of rock, paper, scissors was played to determine who would be the one to experience a once in a lifetime drive. My partner in crime and all-around good guy finally won and slipped himself over the door bar of the cage then settled into the houndstooth. His report after the drive, (he kept his drive short so as to not rack up too many miles on this example), included unlimited acceleration, quick smooth shifting, stop on a dime braking and rail-like handling. All accessories were fully functional during the drive and proof positive that our illustrious test track was no match for this modern muscle.

Every manufacturer has its inhouse "high performance" department but just like in days of yore it took a few likeminded gearheads with a dream and a great company to create a supercar out of a muscle car. Chevrolet gave the basic design and GMMG did the rest with more cues and homage to the COPO 9560 heritage than one can shake a stick at. Join the elite with this 1 of 31 Phase III ZL1 Supercars right out of 1969....I mean 2002...no drool included.