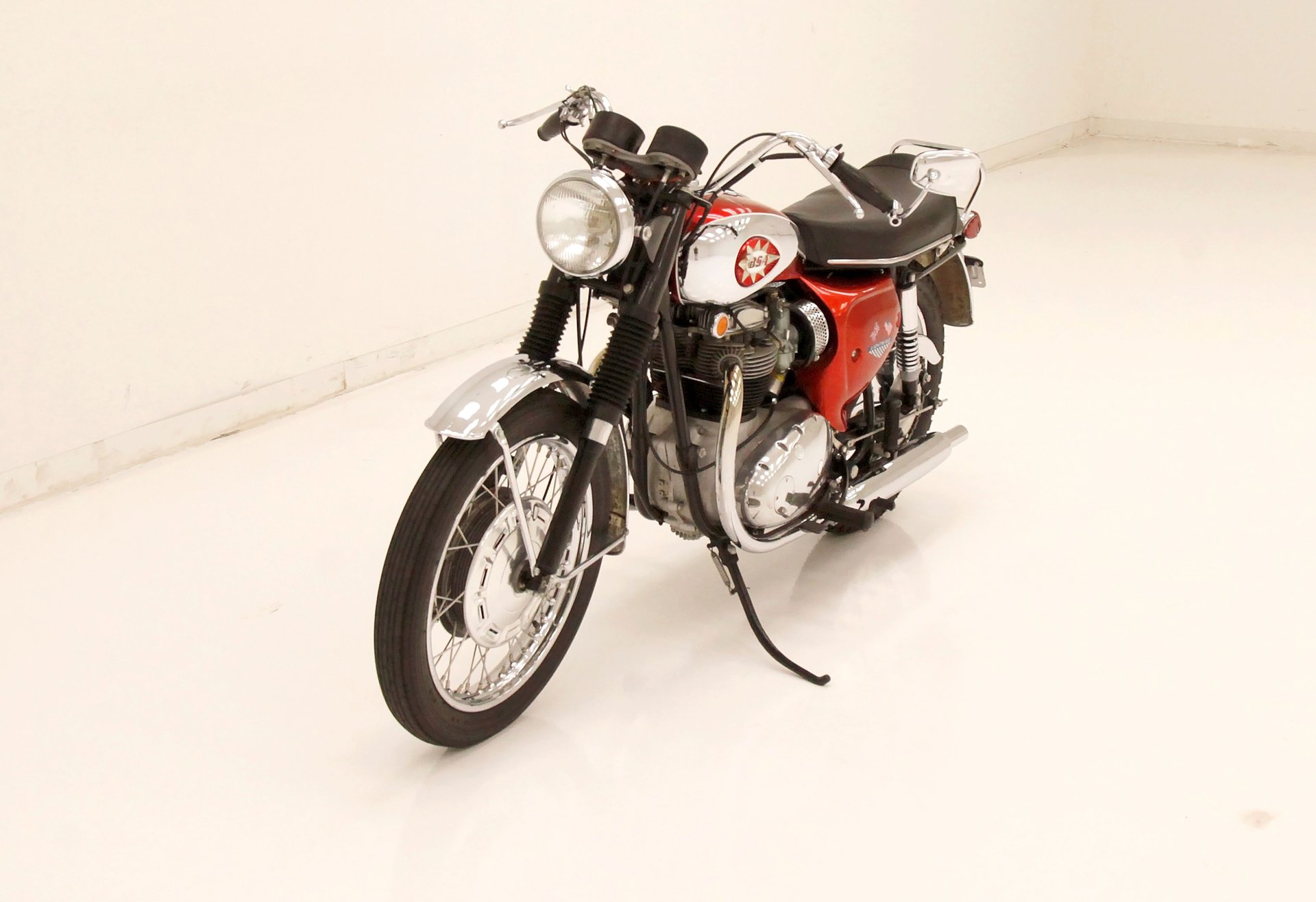 Bond….James Bond, at some points seemingly had the whole underground world after him and the Thunderbolt movie was no exception. In this film, henchwoman Fiona Volpe, (which is Italian for Fox ), seduces Bond and then holds him captive at gunpoint. He escapes, but prior to this there is a firing of missiles from a BSA to kill fellow operative Count Lippe. Bond is later seen in a dance scene and turns Fiona into the path of an oncoming bullet with a dip, and she's killed instantly. The BSA's screen debut!

Called BSA after the Birmingham Small Arms company this most sought-after model was definitely the “IT” bike of the late 1960's. With 650cc's and plenty of extra chromed parts it came in either gold or red accenting. Our consignment was purchased from a Harrisburg Mecum Auction by the consigner who became the bike's second owner. It was restored to concours condition and all buttoned up to spit spot shape . A cracking bike Wallace!

In studying the exterior visual of this sought after bike, you'll notice that everything has been rebuilt or re-chromed to exacting specifications. The correct red is peppering the mostly newly chrome plated parts, and right down to the badging and correct tank badges are adhered to the bike. You'll notice between the handlebars are a speedo and tachometer which have been fully restored which comes at a great expense. The seat is black leather and has also been restored to perfection. Chromed fenders have black coated forks for the front suspension, and on back are coil springs over shock absorbers. 19 inch wire wheels are wrapped with like new low mileage skins. All like new and all ready for a capable rocker to fire off his missiles.

650cc's are now sporting new valve guides, springs, pistons, rod bearings and small end bushings which are of key importance. A Boyer ignition is now on, and a neat feature of this bike is if you are found to be out and the battery is spent, you can bypass it and just use the alternator going directly to the coils, to start the bike. All this adds ups to the attainable “Ton” allowing you to easily cruise with traffic and then some. Feeding this engine are dual 1 barrel Amal carbs, and power goes through a 4-speed transmission. Front telescoping forks with hydraulic shocks, and a rear swing arm with a coil spring provide the ride, drum braking brings it to a halt. Dual exhaust flows through shiny pipes on either side. In Zen and the Art of Motorcycle Maintenance Robert Pirsing writes, “it is the sides of the mountain which sustain life not the top”.

A much sought-after model, classic in its own right and all restored to concours condition, as close to perfection as one can get. Not Japanese, not American but decidedly British and worth every pound, this bike rides like a dream, handles well, and is conducive to taking along a partner. I guess if you can read the back of my shirt, she has fallen off! Come in for a serious look and even take it for a ride, and you'll be impressed, (If the chain don't break Motorcycle Mamma). Cheerio!