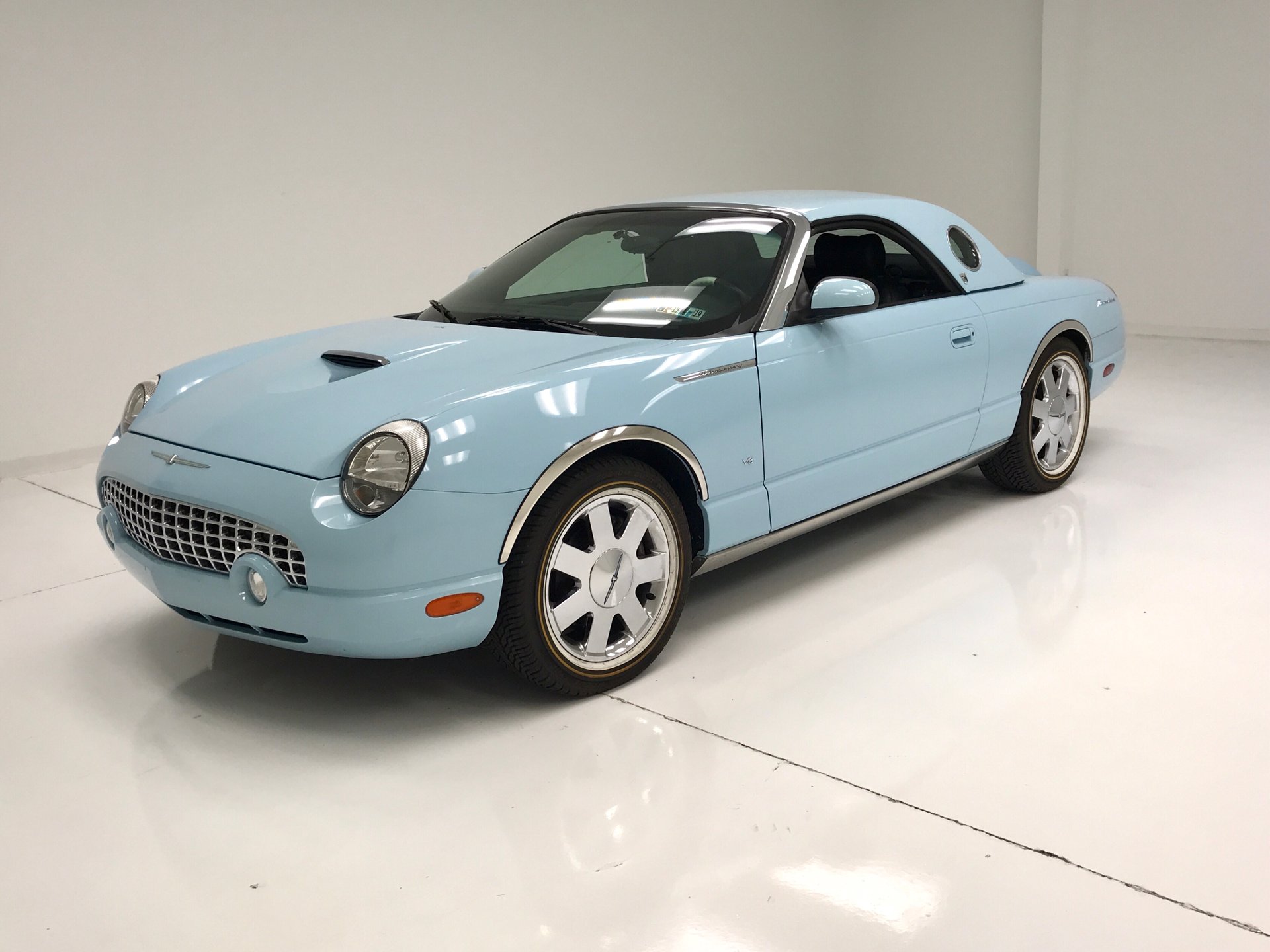 Ford began its development of the Thunderbird in the years following World War II, during which American servicemen had the opportunity to observe sleek European sports cars. General Motors built the first American sports car: the Chevrolet Corvette, released in 1953. The undeniably sleek Corvette's initial engine performance was relatively underwhelming, but it was gaining lots of attention from the press and public, and Ford was motivated to respond, rushing the Thunderbird to the market in 1955. The 1955 Thunderbird was an immediate hit, selling more than 14,000 that year (compared to just 700 Corvettes). The success of the Thunderbird led Chevrolet to continue production of (and improve upon) the Corvette, which soon became a tough competitor in the sports car market.

This retro-themed two-seat Thunderbird shares platforms and components with the Lincoln LS sedan, but comes wrapped in styling that's straight out of the mid-1960s. It comes only as a convertible, but an optional hard top is offered for when the weather turns foul, and this car has it. In rare Robin's Egg Blue, the 2003 50th anniversary badged edition has a mere 2,526 original miles on it.

Exterior
Robin's Egg Blue with matching hardtop installed, all in showroom condition. Grille, all chrome, and mechanicals, (door handles, trunk actuator etc) are all functioning and look great as well. An aftermarket full size spare tire holder/rear bumper add on is attached to the rear of the car. Underside views reveal a virtually new and spotless frame, and underbody.

Interior
Two tone black with cream insert horizontal ribbing vinyl bucket seats make up the small passenger compartment. Luxurious black carpet covers the flooring and rear deck behind the seating. Dash contains white analog instrumentation, with a digital mileage/trip odometer. A 6 disk CD player as well as an AM FM stereo radio are molded into the center vertical console. An automatic transmission shift lever topped with a crime retro knob sits between the driver and passenger. All interior surfaces are immaculate, and unmarried.

Drivetrain
A 280-horsepower, 3.9-liter V-8 engine drives the rear wheels via a five-speed automatic transmission. Dual exhaust, and other typical mechanicals are all pristine, as well as engine compartment. Slight heat damage is present on the Thunderbird logo which sits stop the engine but is minimal.

The luxury retailer Neiman Marcus offered an early special edition version in their 2000 Christmas catalog, priced at just under $42,000; their stock of 200 sold out in two hours and 15 minutes. Despite brisk early sales and good reviews, sales of the new Thunderbird couldn't justify continued production. This 2003 shows 50th anniversary badging installed where typically for this model year would be venting. It is unknown how the badging came to be on this model year, as the 50th Anniversary was not until 2005. None the less, a beautiful very low mileage example of this retro design comeback attempt.