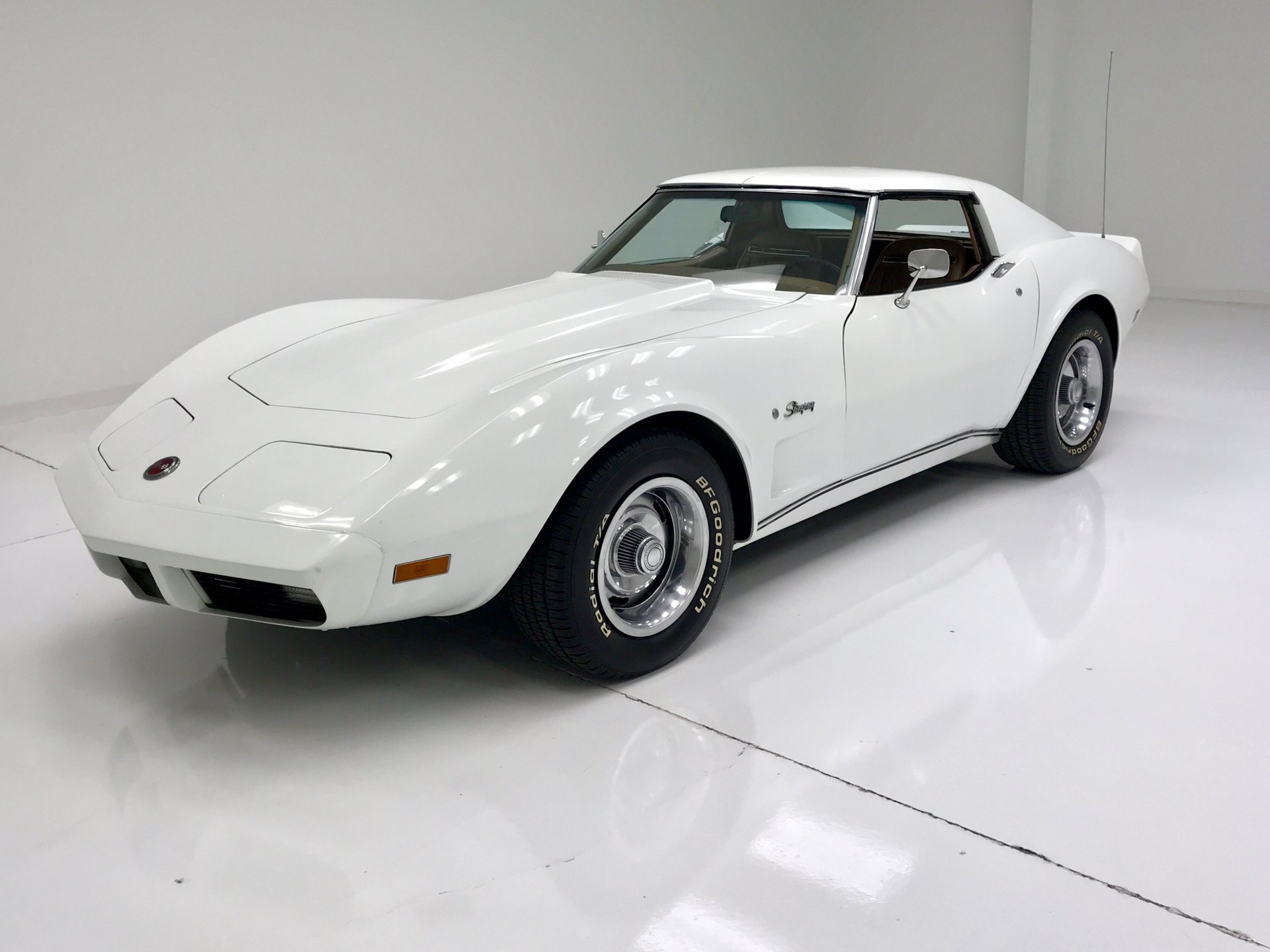 The arrival of the 1974 Chevy Corvette occurred during an abysmal period in automotive history. The period in question actually began in October 1973 when OAPEC, (the Arab members of OPEC plus Egypt, Syria, and Tunisia) proclaimed an oil embargo against the United States. Long lines for gas sprung up nationwide, and the era of the large engine muscle car was coming to an end. Instead of pure power, companies focused on conveniences, and smooth ride, and this year Corvette is exemplary of the times.

This 1974 “T” top Corvette has a 1980-1982 rear bumper attached, as it is showing a spoiler which was not an option on a 1974 model. A white repaint and saddle interior makes up the visual option combination. Exterior presents in fair condition, and it shows 39,375 (*Not know if Actual*) miles clocked on it.

Exterior
White repaint covers the outside of the car and shows some blemishes (cracks, scratches, dents etc.). As noted a 1980-1982 Rear bumper/spoiler combination has replaced the original 1974 simple rounded version. Hidden headlights and a removable 2 piece “T” top are present as well. An injection molded urethane covered Omari-bolt-and tube frame creates the 5MPH crash test requirement which was new for 1974. The rear contains the same setup, and houses the rear lighting, and conforms to the 5MPH regulation as well. The absence of chrome bumpers is the defining style cue of this 1974 model.

Interior
Camel bucket seats in vinyl with tube stitched vertical cloth provide a comfortable and low center of gravity for the driver and passenger. Camel vinyl with black analog instrumentation makes up the dash, as well as dots the center vertical console with pertinent information regarding various systems. A center shift knob works an automatic transmission and resides between the two bucket seats. Camel carpeting shows fading and staining, covers all floors, and compartments behind the seats. A vinyl triple foldout compartment is seen in place of a typical glove compartment. Power window controls are also on either side of the center console with the parking brake lever.

This 1974 Corvette Coupe with “T” style roof runs beautifully and has been maintained throughout its life. Showing some signs of wear, there is still a lot left in this car, that was at the cusp of technology that would change to combine performance and fuel economy, along with creature comforts. The first Corvette that was designed to run on standard Unleaded gas, and conform to NHITSA 5MPH crash tests, a completely new look and another iteration in the Corvette legacy.