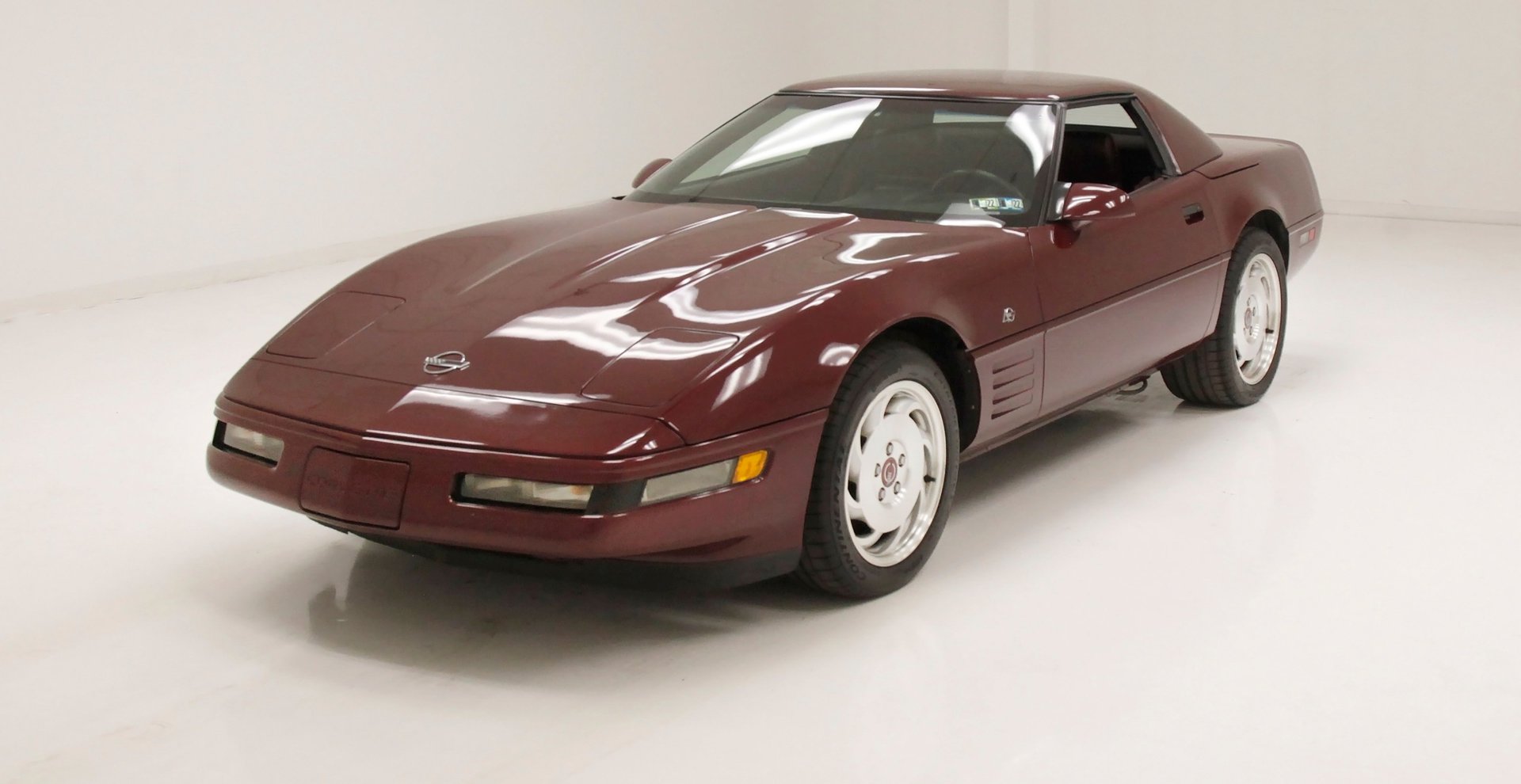 Dressed in all Ruby Red this is a shining example of the 40th Anniversary Corvette convertible. 58,628 miles is low for a 1993, and it has been well taken care of and garage kept by the 2 owners, a husband and wife. An overall clean car, 40th Anniversary badging, fully loaded as per the window sticker, including the optional hardtop, selective ride and handling equipment, and a 5.7-liter V8, grab a piece of history right here in our Hallowed Halls at Classic Auto Mall.

Exterior
As were all 40th anniversary Corvettes, this one is covered in the original coating of Ruby Red Metallic, and it is all good. Minor scratches here and there and a notable scuff and area of missing paint is seen on the driver's rear bumper, but all functioning well. A body matching hardtop is on and can easily be removed by 2 adults, and lurking underneath the flip up tonneau is the convertible soft top presenting in a Ruby Red hue. Hidden headlights and integrated matching bumpers very thin in height in the low-slung front, and squared off on the rear, this iconic design “Vette” drips early 90's conventions. Cleaner less curved boxy lines dominate the exterior and are even utilized on the rectangular chromed exhaust tips. The iconic finned cove now relegated to the front quarter panels serves to let some fresh air into the engine bay. Polish aluminum turbine style wheels are noted on all 4 corners and are wrapped in nearly new staggered width 17 low profile blackwall rubber.

Interior
Shining Ruby Red leather for the buckets which showed a little patina and some minor folding presents for the 2 powered and passenger hugging seats. These high backs are embroidered on the headrest with the 40th Anniversary badge. Racing between the buckets toward the dash is the center console, which houses a glovebox, seat controls, the automatic shifter and ride control knob. Swooping skyward and curving toward the driver's side it rolls upward and forms the instrument cluster. Pre digital dash analog gauges are noted. There is an information center in the middle of the dash, however it is only a cluster of warning lights and not a full screen, (give it time they were working on it!). Nice Ruby Red carpet covers the floors, and door panels, which have a black accenting that flows toward the black dash.

Drivetrain
A 350ci LT1 V8 making 300hp with help from electronic fuel injection resides under the forward tilting hood. A 4L60E 4-speed automatic transmission is bolted on and sends power back to a rear axle weighing in with a 2.59 limited slip ratio. All well cared for and looking ready to show and go.

Undercarriage
Garage kept, would be the way to describe the wonderfully preserved, original rust-free undercarriage. Single fiberglass composite mono leaf spring with unequal length aluminum control arms and stabilizer bar, are up front, and on the rear is a fully independent 5 link system with fiberglass single leaf spring, aluminum upper/lower trailing links and a strut tie-rod assembly. Power disc brakes are all around and power steering is noted. The factory installed dual exhaust system is still in place and remains rust free.

Drive-Ability
I slipped in and lit the candles, and we're off. Me and my cohort took this one through the paces at the Classic Auto Mall test pad, and it performed well. Smooth acceleration, good handling, and a super quick stopper. The suspension is good cruising and handling in a performance situation, so you are treated to the best of both worlds.

Many of the Corvettes we take in here that are from the 90's are driven hard and put up wet. Typically, they were bought by individuals who found success, and wanted a powerful status car they could fool around with, punch the gas, put down some rubber, and move on to another vehicle. This car could be described as a favorite toy for its owner, who painstakingly took care of all aspects of the responsibilities that come with a sports car from the early 90's. All original, and all nice… isn't it your time to own a Corvette?