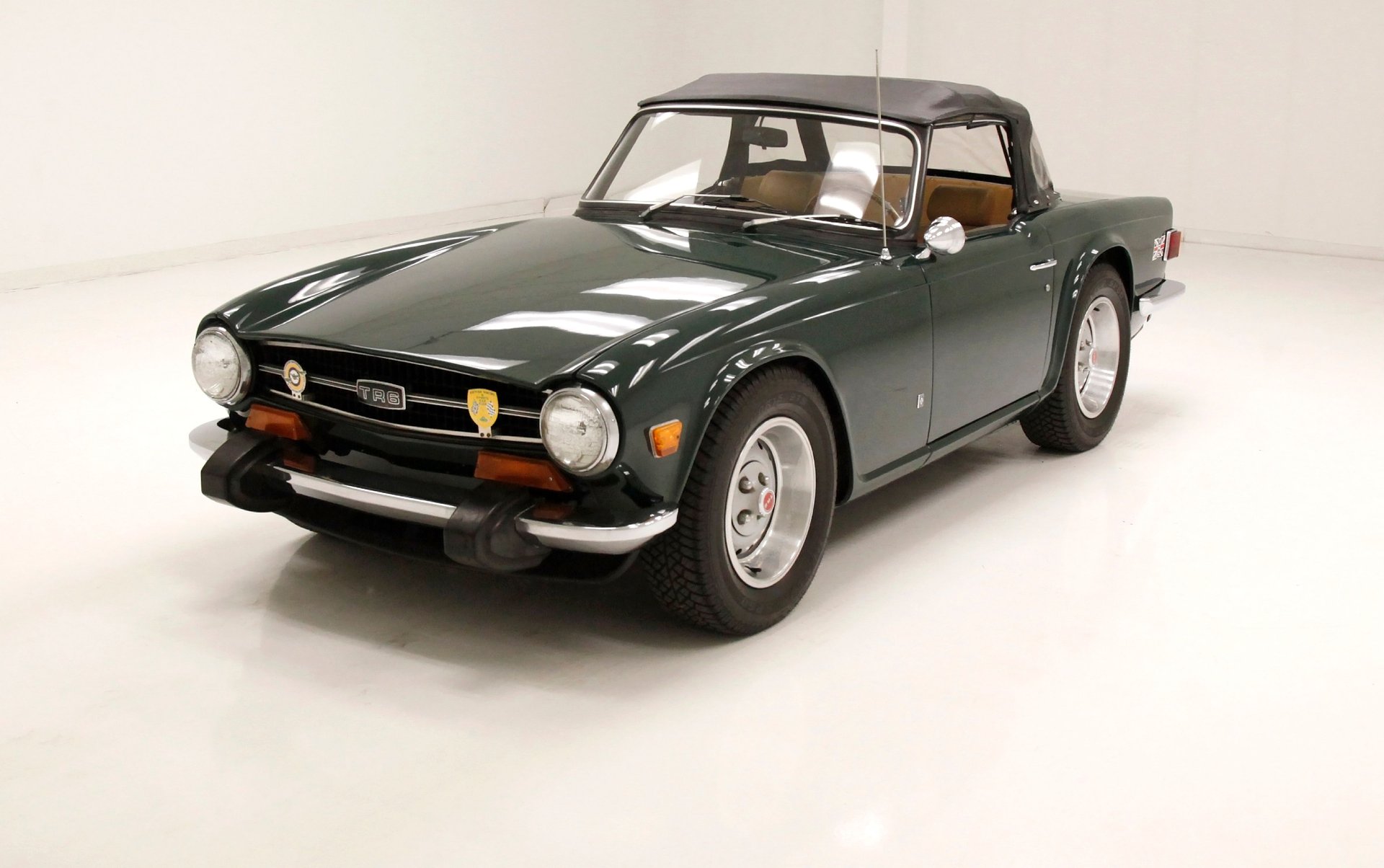 The Triumph TR6 (1968–76) is a sports car built by British Triumph Motor Company between 1968 and 1976. It was the best-seller of the TR range when production ended, a record subsequently surpassed by the TR7. Of the 91,850 TR6's produced, 83,480 were exported; only 8,370 were sold in the UK. The bodywork was generally similar to the TR4/TR5, but the front and back ends were squared off, reportedly as a result of a consultancy contract involving Karmann. With just a seven year production span, the TR6 grew to become a true British classic. The frame, engine, running gear, body tub and doors were similar to the Michelotti-styled TR5 (TR250 in the US). The front and rear of the car was restyled by Karmann of Germany, though one source claims the new squared-off Kamm tail design was from an unrelated Michelotti prototype. A new removable hardtop was designed in-house.

Born in jolly old England and now gracing the North Mallway of our Hallowed Halls, we offer for consignment, a Triumph TR6 right out of the 1974 model year. A boxy design, tall tires, long bonnet, short square boot, rectangular rear lighting, vinyl seats, a veneer wood dash, Lucas electrics, Stromberg carburetors and a zippy 6-cylinder engine, all go into making the TR6 a true British Sportscar. Previously restored and then purchased by our consignor in 2006 and then in 2010 this Brit underwent a major engine overhaul completed by Triumph Rescue, so you can ensure many years and many miles of carefree driving.

Exterior
Very straight mostly rust-free steel panels with good gaps adorn this car with only minor inclusions in the paint. Bathed in British Racing Green, (what other color is there for a sports car from across the pond?) and looking just spit spot with thin chrome bumpers and their black bumper overriders adorning the front and rear of this car. We also note a correct chin spoiler is seen in the front and hovering in the TR6 badged grille are club badges which are removable. Badging is correct, and the rear of the car is satin black with chrome trimmed wrap around tail/turn/reverse lights seen at the outboard corners. The convertible top in black, presents with no tearing and a clear but wrinkled plastic rear window. The center hubcaps and trim rings adorn the deep dish drilled steel wheels on all 4 corners and are shod in deep treaded Dunlop blackwall rubber.

Interior
A wood dash with nearly new appearing veneer stretches across the inside of the car and is surrounded by padded black vinyl. Essential instrumentation is seen in front of the original steering wheel, and are of course Smiths brand, which was a staple of 1970's Triumphs. A wood rimmed 3 spoke drilled steering wheel fronts the dash and keeps the English vibe alive. Barley vinyl buckets with smooth bolsters and tuck and roll inserts have just a touch of wrinkling and a slight tear in the driver's upper bolster float in a sea of clean Barley carpeting with black rubber mats for extra protection and an adequately sized storage area is behind these seats. Like new Barley vinyl door panels cover the doors and are looking just fine with their chrome handles and obligatory map pockets. Between the front buckets is the parking brake lever and just ahead of the decidedly British wood knob topped shifter is an aftermarket AM/FM/Cassette stereo.

Drivetrain
Flipping open the bonnet we are met with an overhauled in 2010 inline OHV 6-cylinder displacing 152ci, 2.5 Liters for those using the Metric system, and is fed by 3 Zenith Stromberg single barrel downdraft carburetors. On the back of the mill is a 4-speed manual transmission and putting the power to the ground is a rear axle weighing in with a 3.80 ratio.

Drive-Ability
A test drive in this Triumph was a blast from the past as this writer owned this very same car. This TR6 runs smoothly, although had to be choked just a bit for smooth idle until the engine warmed up. The transmission shifted up and down smoothly and the braking was adequate. Always a snappy handling car, it brought back good memories, especially with all options fully functional. Some wind in your hair, and the throaty exhaust sound goes a long way to calm the soul.

No rust to be seen, a timeless and iconic paint hue, a clean interior with a slightly wrinkled but otherwise nice top, and a 6 popper with 3 Strombergs you are tooling in British style from 1974, courtesy of Michelotti design. All that's left to say is cracking good show aye what?