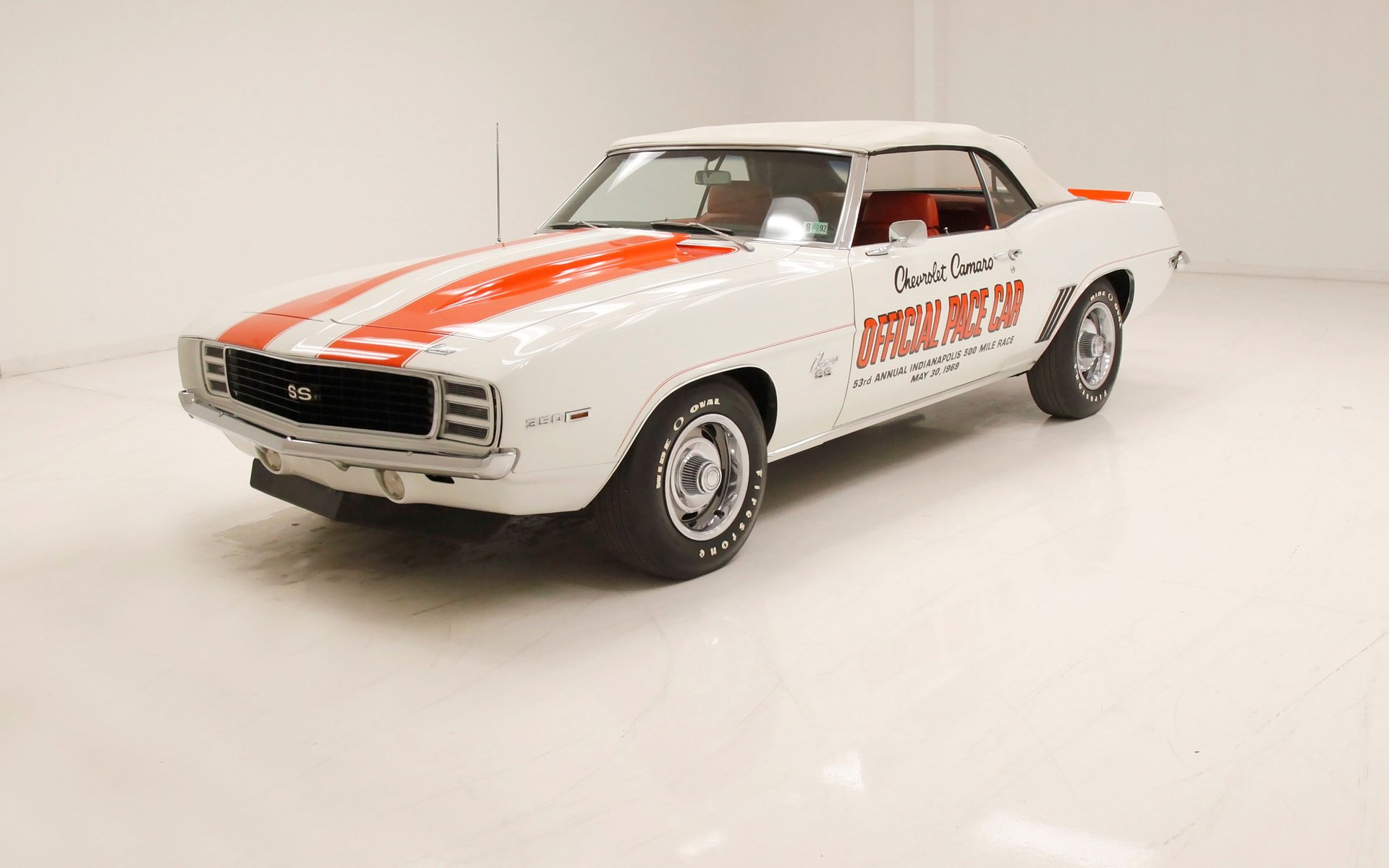 In February 1969, General Motors held a press conference to unveil the modified Camaro SS/RS convertible that would serve as the pace car for the 1969 Indianapolis 500. This was the second time a Camaro would serve in this role since it had previously done so in 1967. However, this time, GM was pulling out all the stops. Two cars would be built for the actual pace car duty, a primary vehicle and a backup, each thoroughly inspected and specially modified by top Chevrolet engineers, but GM also built one replica that would be given to the winner of the race. Additionally, a large fleet of 130 replicas and support vehicles were brought to the track. This fleet was used by race officials, media, and VIPs. After the Indy 500, Chevrolet dealers offered the Pace Car replica package as option code RPO Z11, "Indy 500 Pace Car Accents". The Z11 package cost a mere $36.90. According to Camaros.org, a total of 3,675 Z11 Camaro Pace Car replicas were produced for the 1969 model year. A Z10 coupe version was also offered at certain dealers in the Southwest; approximately 500 vehicles were built with that option.

Imagine yourself behind the wheel of one of the best year Camaros, leading the field of 33 with the likes of Andretti, Unser, Foyt, Gurney, and Donahue behind you! Then imagine being the only front engine powered car on the track! A mere 4 owners since new and a restoration done prior to our consignors purchase in 1983, we present to you a real deal 1969 Chevrolet Camaro Pace Car replica.

Exterior
Dover White covers the straight steel slabs on this car, which are all minding their gaps very well and it's really nicely buffed and has a glass like presentation with only a few faults upon close inspection. Also, adorning the exterior are dual wide Hugger Orange painted on racing stripes, which…. well race up the long hood of this pony car stopping at the front windscreen and continue on the small rear deck and cool spoiler atop. At the front of its body, a satin black grille hangs a familiar “SS” emblem above clean parking lamps, a small black spoiler, chromed bumper and correct RS hidden headlights. Behind that grille, a requisite Camaro header fronts a cowl induction hood, which flows to a tinted greenhouse that's dressed in polished mirrors, polished wipers and straight stainless trim. All this topped by a tear free but slightly stained white canvas convertible top. On the sides, stainless trim frames the wheel openings and a rocker spears between them, correct quarter louvers are on as well as traditional door handles and ornate fender emblems. One cannot miss the huge door decal noting this car as an Official Pace Car, and at the back of the car, an “SS” branded filler panel, RS taillights, and a second chromed bumper. 14" deep dish rally wheels are on along with raised white letter Firestone Wide Oval tires in F70-14 configuration.

Interior
Swinging open the well balanced door and we are met with an orange vinyl covered molded door panel with a swoopy armrest and bright chrome strip following suit. The bottom of the panel is dressed in clean black carpet and gives nice contrast. Smooth orange vinyl bolsters with orange and black houndstooth cloth inserts covers the recovered front buckets and rear bench, this interior is fab! Up front there is a new dash pad, very clean instruments and some wood appliqué on the steering wheel, in nice condition, and a factory tilt mechanism is also on. Also, the original AM radio, which works, is within the resorted dash. A wood appliqué center console races from rear to dash and houses an aircraft throttle inspired horseshoe shaped shifter. A sea of calm black carpet douses the floors and is in nice condition.

Drivetrain
A hoist of the hood, and we note a 350ci V8 in good shiny condition. This engine carries a correct 3982388 casting number along with the correct 300hp HB stamping code but a different VIN is on the block. This is topped with a 4bbl carburetor and correct cowl induction air cleaner assembly. A non-stamped or tagged TH350 3-speed automatic transmission is on back which connects to a 3.07 geared conventional 12 bolt rear. Everything in the engine bay looks just fab with an orange/red painted block and supple black hoses.

Undercarriage
A very small amount of surface rust is seen on the usual suspects, however unremarkable. Solid unibody, and floor pans, and correct stock style dual exhaust can be seen underneath. Independent front suspension with coil springs and power disc brakes is on the front while on the rear we see leaf springs and power drums. A very nice presentation down below.

Drive-Ability
It isn't often that I clamor to drive a muscle car but when the chance to drive this came up, I hopped over my desk and swiped the keys right from my crack decoder's hands. Slipping into the driver's seat was a breeze thanks in part to the tilt column and the houndstooth is just heavenly to sit in. With a turn of the key the engine came to life and settled into a nice healthy rumble. I slid the shifter into drive and off to the test track I went. Here it performed well with ample acceleration from the 350 cubes and I kept glancing in the rearview mirror hoping to see Foyt, Andretti, and Unser bearing down on me waiting for the green flag, but I digress. On the track the car handled very well, and braking was smooth and bias free. All in all, a great drive with all functions operational, including the headlight door mechanism which have been rebuilt.

We get lots of Camaros through the door here at the Classic Auto Mall but none quite as unique as this Pace Car Convertible. Having not only a detailed list of the 4 owners but also the Protecto-Plate and the original body broadcast sheet showing the Z11, Z22, Z27, Z87 and ZL2 options. Rarely seen and rarely do these cars come up for sale, but now holding its own in our North mallway...Gentlemen, Start Your Engines!!!