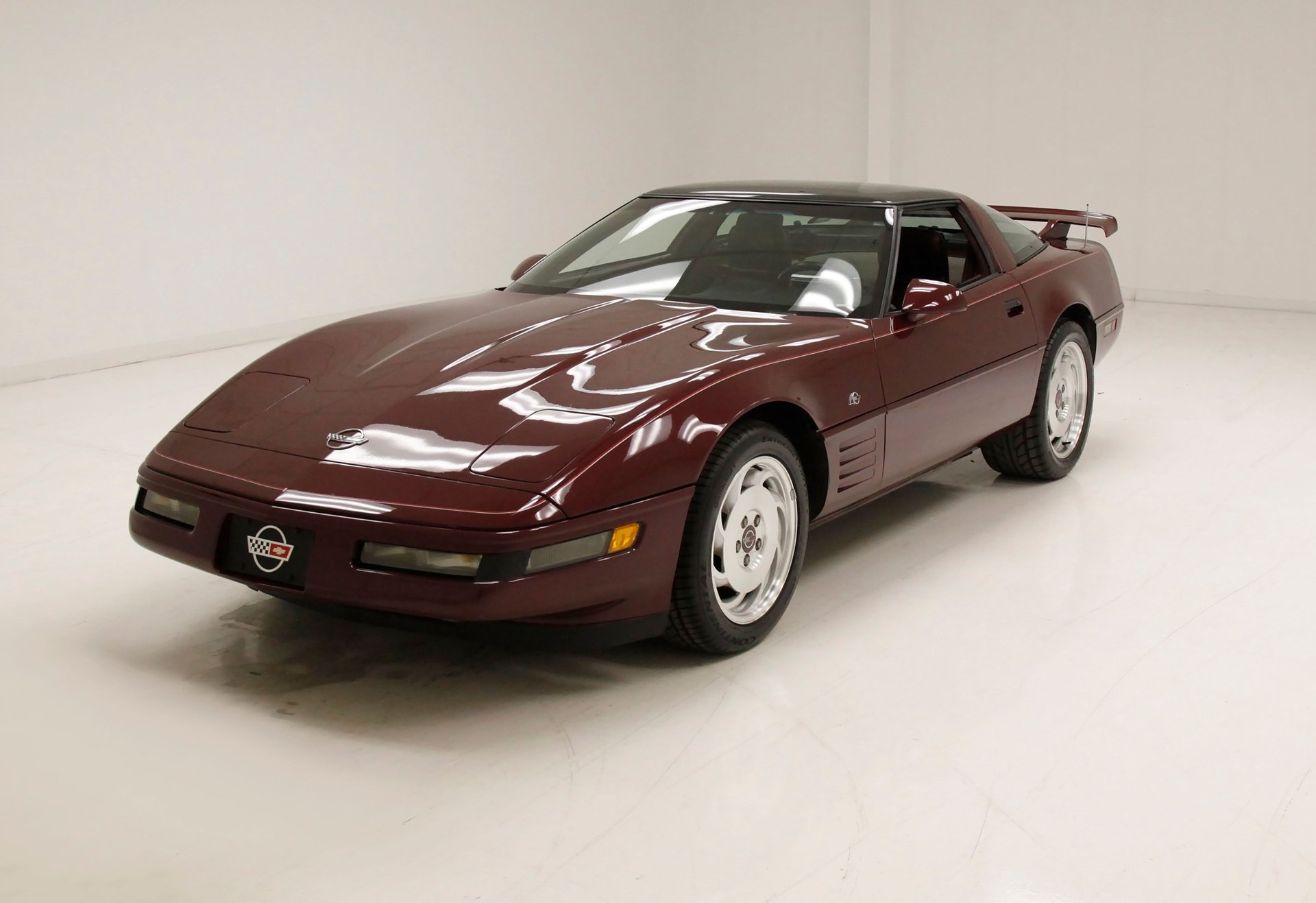 Don't purchase a '93 40th Anniversary Edition Corvette and squirrel it away in a warehouse hoping it will make you wealthy. If you want to collect something that really might make a fortune someday, try gold coins, 1950's Eames era furniture, hood ornaments, or a limited run of “Michael Jackson's Neverland” Commemorative plates. This car was made to be driven. It would be a shame to own it and have it any other way.

For consignment, a very nice 1993 40th Anniversary Edition Corvette, all original and all good. This is a jump in, turn the key, and have loads of enjoyment with the see-through top in or remove it for some wind in your hair fun. Pedal to the metal, or lightly tickling it with your toe on a windy undulating drive, only having logged 48,003 miles and well maintained by a conscientious mechanic, there is plenty of life to be lived with this Classic Corvette.

Exterior
All correct 40th Anniversary Corvette badging, stuck to the immaculate Ruby Red Metallic fiberglass exterior with a removable tinted see through top for some extra excitement and as an extra bonus a body colored top is also included. A tall consignor stated factory rear spoiler in matching Ruby Red is on the rear deck and gives the car a definitive racer look although there are some questions to the validity of this statement. Hidden headlights with rebuilt motors and bronze gears and integrated matching bumpers very thin in height in the low-slung front, and squared off on the rear, this iconic design “Vette” drips early 90's conventions.

Interior
Ruby Red leather buckets with wonderfully pleasing patina show use, but not overuse. Lowering yourself into this cockpit, you will feel like a sports car endurance driver, strapped in but with all the creature comforts: power seat controls, power windows, cruise control, anti-skid mode, climate control, power locks, power mirrors, and an AM/FM/CD/Cassette sound system that will be music to your ears. A smattering of black vinyl accents in the form of the center console, door pulls, dash, and armrests, breaks up all the Ruby Red leather and gives the cockpit a very classy yet sporty look. A large information screen is seen, as well as a mixture of analog and orange glow digital gauges. Under the large glass rear greenhouse is a carpeted storage area that holds the removable targa roof and is carpeted in plush ruby red carpet.

Drivetrain
A 350ci LT1 V8 making 300hp with help from electronic fuel injection resides under the forward tilting hood. A 4L60E 4-speed automatic transmission is bolted on and sends power back to a rear axle weighing in with a 2.59 limited slip ratio. Our consignor notes that then engine recently had an oil change with Mobil 1, the A/C was recharged, and a transmission servicing was done with new fluid.

Undercarriage
Garage kept, would be the way to describe the wonderfully preserved, original rust-free undercarriage. Single fiberglass composite mono leaf spring with unequal length aluminum control arms and stabilizer bar, are up front, and on the rear is a fully independent 5 link system with fiberglass single leaf spring, aluminum upper/lower trailing links and a strut tie-rod assembly. Power disc brakes are all around as is power steering.

Drive-Ability
I slipped in and lit the candles, and we're off. Me and my cohort took this one through the paces at the Classic Auto Mall test pad, and it performed well. Smooth acceleration, good handling, and a super quick stopper. The suspension is good cruising and handling in a performance situation, so you are treated to the best of both worlds.

Many of the Corvettes we take in here that are from the 90's are driven hard and put up wet. Typically, they were bought by individuals who found success, and wanted a powerful status car they could fool around with, punch the gas, put down some rubber, and move on to another vehicle. This car could be described as a favorite toy for its owner, who painstakingly took care of all aspects of the responsibilities that come with a sports car from the early 90's. All original, and all nice… isn't it your time to own a Corvette?