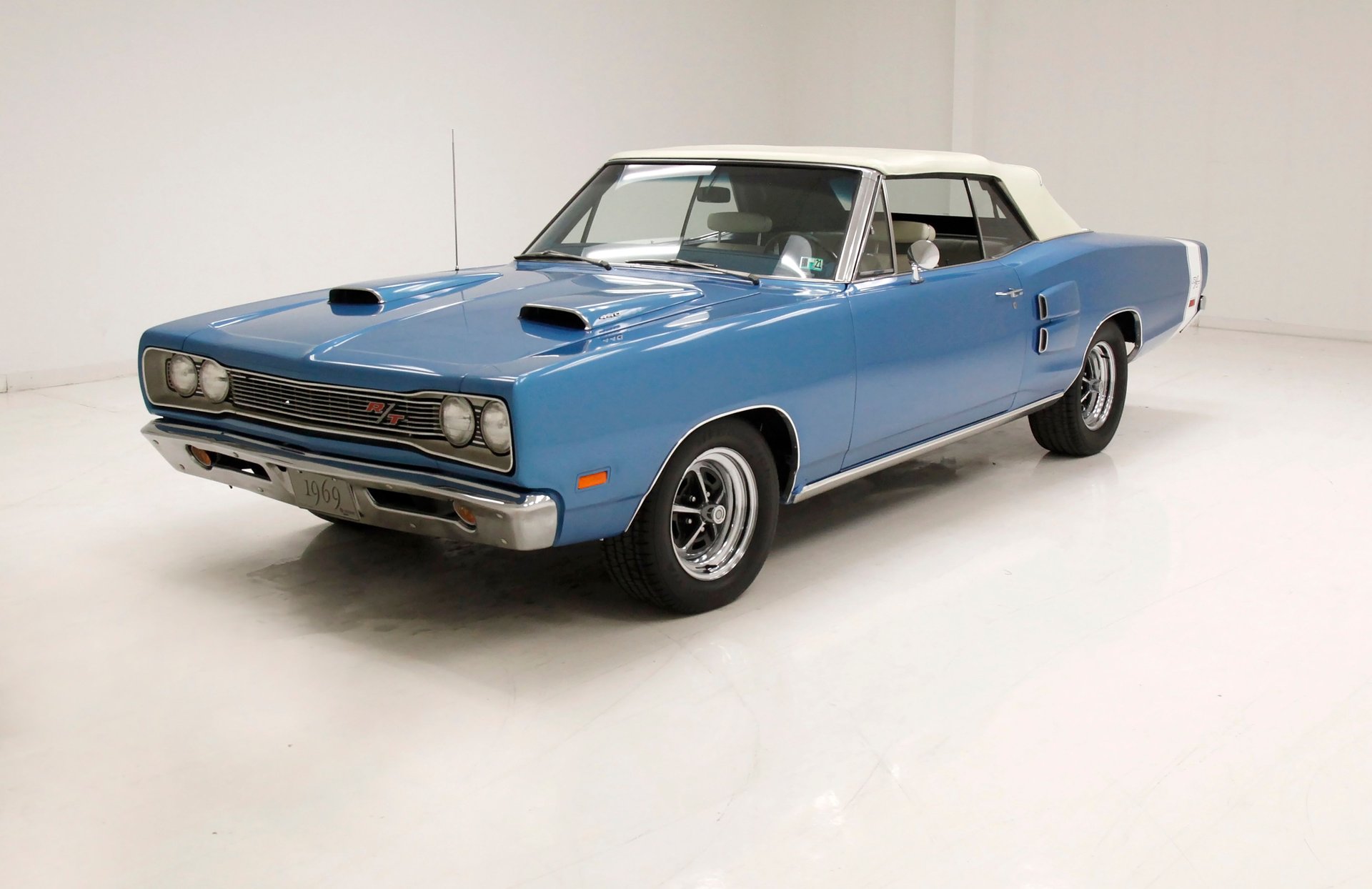 The 1969 Coronet R/T was an affordable Mopar product that was launched in 1966 as a very generic Point A to Point B as suggested by its styling, but it possessed the same level of witchcraft under the hood as it's more famous cousins. The Coronet R/T came in as standard with a 440 Magnum V8 that was designed to appeal to the masses and also work as a very capable tuning bed for people who wanted to tinker under the hood. The 440 managed to produce a very healthy 375hp of power and 480 lb-ft. of torque which has been proven to be very conservative factory estimates. This engine came mated to either a three-speed TorqueFlite 727 automatic transmission as standard or as a no-charge option, one could also opt for the A-833 four-speed manual with the 1969 as well as the 68' models featuring a Hurst shifter. If a customer was to order the four-speed manual back then, Dodge also threw in a Sure Grip differential and heavy-duty axles to beef up the level of abuse the Coronet R/T could take.
If you'd like to be set apart from the hordes of Mustang, Camaro, GTO, and Corvette owners then the 1969 Coronet R/T is for you! From its humble but capable beginnings as a pedestrian mode of transportation it grew into a tire shredding straight line performer. We present for consignment a 1969 Dodge Coronet R/T convertible. From the stunning blue paint to the white interior and white vinyl top to the more than capable factory underrated 440ci V8 this restoration was over the top and now waiting for you in the North Mallway of our hallowed halls.

Exterior
Bright Blue Metallic bathes all surfaces of this all-steel car, is miles deep, and very few imperfections are seen. The beginnings of the coke bottle design are shown on the quarter panels which bump outward just slightly from the doors with a look from above and sport a pair of faux side scoops. Nice stainless trimmings are present, and a pair of wheel arch moldings become bookends for the rocker trim which is also stainless. A clean and white vinyl top in like new condition tops the passenger compartment and has a glass window. This car has all its correct badging, the correct blacked out tail panel, groovy tri set taillights borrowed from the Coronet 500 line and liberties were taken by adding a white transverse R/T tail stripe. The correct N96 Ramcharger fresh air hood sits proudly above the chrome ribbed grille with its red R/T badge and textured argent surround. 15-inch Mopar road wheels showing off their bright and shiny chrome are on all 4 corners and are shod in blackwall BF Goodrich rubber.

Interior
Swinging open the door and we are met with a cleaner than clean Bright Blue Metallic steel door frame with a central white vinyl tuck and roll insert pattern insert. Here reside not only the window crank and door release but a wood applique strip and red courtesy reflector. A hi back duo of bucket seats with white vinyl tuck and roll inserts and smooth white bolsters flank a blue central console that is topped with a chrome surround and wood applique inlay. The seats are very clean, and the rear bench follows suit with the front buckets. The restored dash, very clean, is up front, and is presenting itself also in blue. Textured plastic in black offers up a background for the instruments which include the factory tic toc tach, gauges, toggles, and controls. The factory solid state AM radio sits in its original place and the heater slides sit just above. Clean blue carpet floods the floors in front and in back, and above, the underside of the top in black shows minor soiling. A shout out to the restored trunk with its clean gray plaid mat, full size spare, and jack assembly.

Drivetrain
Moving to the heart of the operation, we see a completely refreshed non original, (circa 1969 based on the block vin stamping), 440ci mill that produces a factory underrated 375hp all bathed in the correct Mopar orange. It is topped with a 4bbl carburetor and has clean wiring, supple hoses and looks like it just left the assembly line. A 4-speed manual A833 transmission which is numbers matching and was assembled on April 30th 1969 as noted by its 2833 Mopar 10,000 day Julian Calendar stamping. All this power heads to the rear where we see a Dana 60 3.54 Suregrip rear. A shout out to the correct and factory optioned Ramcharger scoop assembly attached to the underside of the hood. My crack decoder wanted me to let you know that the radiator support has been replaced but correctly painted with the front facing side painted in black and with the purchase the original vin stamped support will be included.

Undercarriage
Clean and rust free are the terms for down below. Undercoating covers the floors and may well be factory applied. A few notables' underneath, in the form of Track Pak heavy duty suspension which is torsion bar upfront, and leaf spring in the rear. Power disc brakes are upfront, and power drums on the rear. The shiny stock replacement dual exhaust snakes its way rearward passing all the blue and black absolute rust free panels, a new tank, and shiny components.

Drive-ability
Our decoder has some behind the wheel time in this wonderful piece of muscle from 1969, and he reports all is buttoned up with any controls, brakes are very good, (they need to be), and he could definitely feel the 375 horsepower with the seat of the pants dynamometer. All functions were fully operational at the time of his drive. He loved it!

You could use the words wonderfully restored when talking about this car, as it is spotless. A no stone left unturned done in its original exterior color restoration, with plenty of attention to detail, and we give you a near perfect piece of muscle car history from 1969. You really have to see it in person to appreciate it.