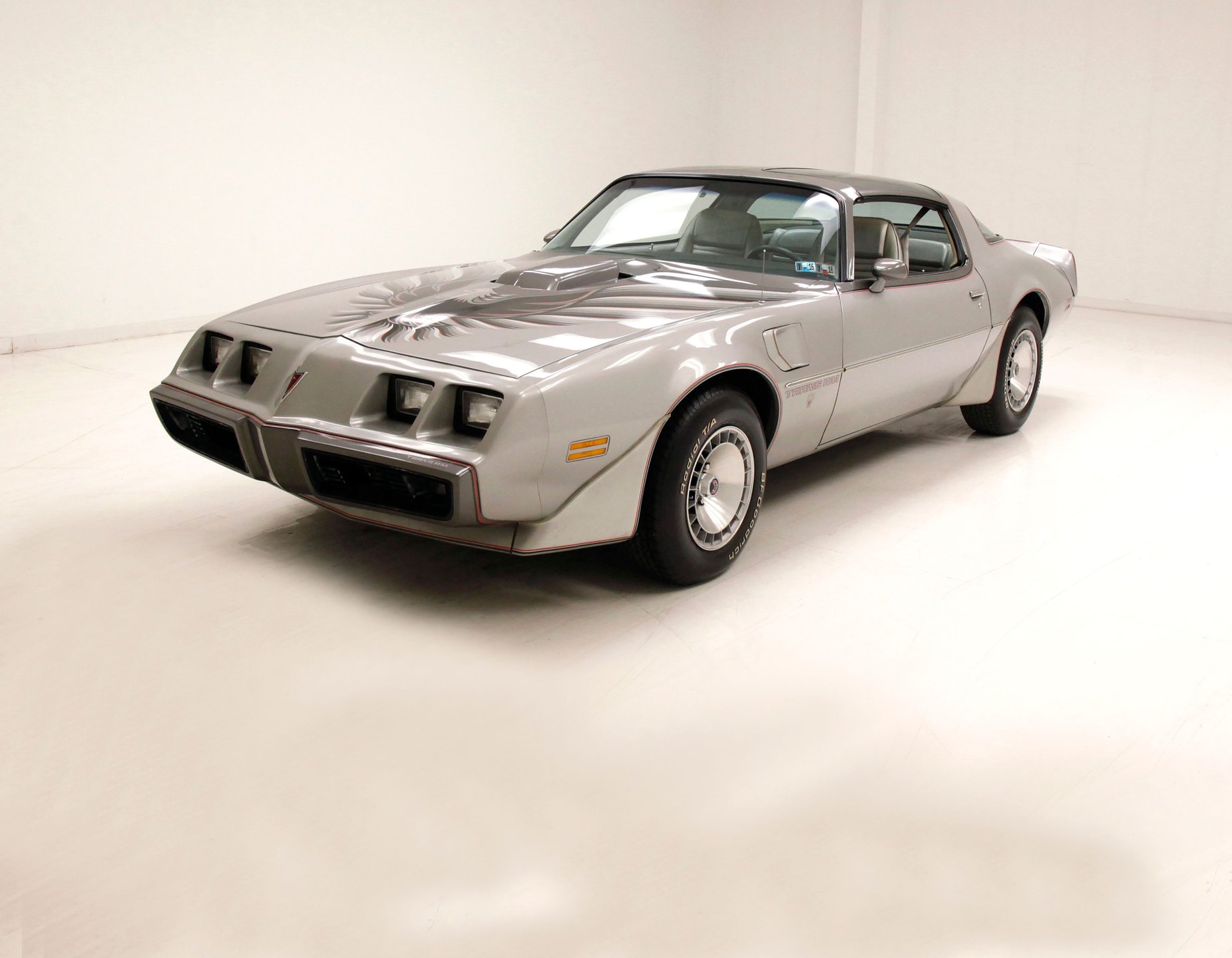 The fuel-efficient future called for smaller displacement engines and smaller vehicles. More bad news—at least for fans of the last American muscle car standing. Through the 1970s, the 6.6-liter Pontiac Trans Am had been the lone heavyweight, but before the party ended, Pontiac served up one last round of the top-shelf stuff and called it "The 10th Anniversary Limited Edition". Along with its special paint treatment, graphics, wheels, and more, this would be among the last of the Trans Ams offered with the "T/A 6.6" 400 engine. As a collectible car from the 1970s, the anniversary Trans Am stands out in terms of desirability and value. The 400 version, sold exclusively with a Borg-Warner Super T-10, is the scarcest, and typically commands the most money.

For consignment, a 10th anniversary edition of the 1979 Pontiac Trans Am. This shining silver dollar sports an Oldsmobile 403ci engine with the TH350 speed and 4bbl carb, all numbers matching. Some special graphics and interior options and happy 10th anniversary. And only 17,563 actual miles. “Pop” goes the champagne!

Exterior
The big news in '79 was the anniversary Trans Am in a never before seen silver and charcoal scheme with a "super bird" on the hood—so called because its wingtips extended onto the tops of the front fenders. A new cast-aluminum turbo wheel design measuring 15 x 8 inches was employed, and on this example are looking very nice! As for the rest of this machine, it shows square deep inset headlights which float above the lower dual opening grille in a darker charcoal gray neoprene with some red pinstripe highlighting on its edge. Below is a silver chin spoiler that wraps around to the front lower fender. Upper front quarters have a vent to circulate more air into the engine bay. The hood has the graphic and it's near perfect in condition. A removable smoked glass T top is seen, and a green house glass curved rear window slopes down to the trunk lid and deck. On back is a small spoiler which is above a horizontal ribbed panel that stretches from side to side and houses the taillights and sports a TRANS AM badge in red knockout type. Below is another neoprene bumper in charcoal gray and encircled by some more pinstriping. Dual chrome exhaust tips peek out from under the rear quarter on both sides. Definitely a looker and probably one of the best right up there with the Bandit edition of yore.

Interior
I'm seeing silver stars for the interior rating with smooth silver padded door panels, a red piping framed insert with a stitched “super bird'' in it in black with red thread accenting. Gray carpeting below and a shiny power lock toggle just above the insert actuator. Inside sleek silver leather buckets with high backs and integrated headrests and showing just slight water damage and have aged nicely with little discoloration. In back is a snazzy 2 plus 2 bench and as we go to the dash through the buckets, we can ride along a gray center console with a storage box/armrest and the shifter housing. Reminiscent of earlier versions the dash uses a machined swirl aluminum insert with a lineup of round gauges surrounded by dark gray vinyl padded dash. Below is an aftermarket radio, however the original radio is in the trunk if you want to re-insert it. A gray leather ringed rally steering wheel is fronting this machine age styled dash, and on the floors is some very clean non faded non soiled carpeting. I do notice a more discoloration on the back of the bucket tubs, and the interior B pillar coverings, but otherwise very nicely preserved.

Drivetrain
Under the “Superbird” decal, scooped hood sits a 403ci V8 in numbers matching condition. These 4bbl carb engines were paired with the TH3503 speed automatic which throws power back to a 10-bolt 2.41 gear limited slip rear axle. Fly away Jack!

Undercarriage
Just as snazzy as the topside with some slight surface rust on the usual suspects, (axle, driveshaft, leaf springs, some exhaust tubes), but the floor pans and rockers remain in their factory black undercoating. Power disc brakes are on all 4 corners and a stock exhaust is on with dual tips on either side as their crescendo on the rear quarters.

Drive-Ability
It's always a blast from the past to drive one of these classics and this car did not disappoint! Smooth acceleration, smooth automatic shifting, and smooth bias free braking form those discs. A smooth operator that flies just like its hood graphic.

Quite the thing of beauty in its silver and platinum dress, and a hint of red and black pin striping as accenting. The Olds 403ci V8 with the automatic transmission makes driving this car a breeze, which you will certainly feel with the T top panels off and flying along at amazing speed. Eat your heart out similar year Corvette owners…