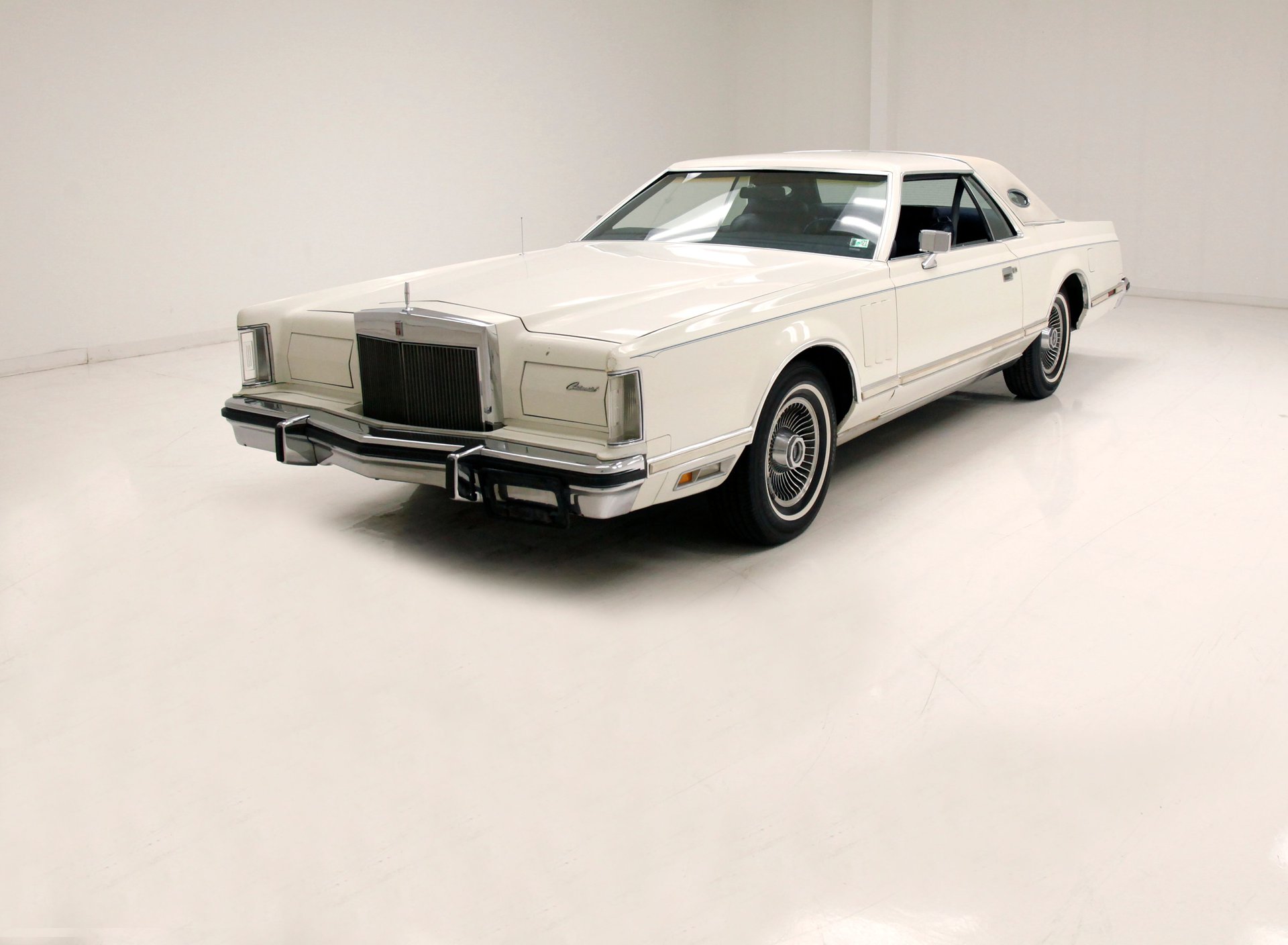 The Lincoln Continental was a series of mid-sized and full-sized luxury cars produced by Lincoln, a division of the American automaker Ford Motor Company. The model line was introduced following the construction of a personal vehicle for Edsel Ford, who commissioned a coach built 1939 Lincoln-Zephyr convertible, developed as a vacation vehicle to attract potential Lincoln buyers. In what would give the model line its name, the exterior was given European "continental" styling elements, including a rear-mounted spare tire. Along with the creation of the personal luxury car segment, the Lincoln Continental marked the zenith of several designs in American automotive history. The Continental is the final American vehicle line with a factory-produced V12 engine (1948), the final four-door convertible (1967), and the final model line to undergo downsizing (for the 1980 model year).

For consignment, a last year holdout to the eventual downsizing that was going to take place the very next year. This particular car comes to us in need of some TLC but still presents well and has plenty of life left in it. It comes in very nicely preserved condition and makes heavy use of white on the exterior steel slabs, and the padded Landau roof. Blue is the accenting color inside, and there are plenty of conveniences added to this large and in charge square and rectangle design of the times car. This will be a head turner in any driveway, mostly because of its large and in charge presence.

Exterior
A big squared off chromed grille is flanked by dual hidden headlights and has a big chrome bumper with rubber inserts below. Vertical rectangular parking and signal lights are on either corner of the front quarters, which frame the front tire, have a few vents in the side, and run up to the massive doors on either side. A white vinyl top in good clean condition can be seen above chrome framed trimmed windows. We do note some invasive rust starting and leaving a stain at the base of the roof on the drivers side. On back the ubiquitous covered spare tire, and cars namesake, now integrated into the trunk lid and serves only as embellishment at this point. Dual vertical V shaped taillights are on each corner, much like the front signal lights, and a nicely preserved bumper is below. Some white vinyl moldings are above a stainless rocker trim, and these trim pieces run the length of the car. A dual pinstripe is on the beltline, and chrome surrounds the wheel wells on all corners. Turbine style wheels with a big central wheel nut shape are wrapped in thin whites on all 4 corners.

Interior
Blue overstuffed square buttoned leather covers the split front bench and rear bench. All of the seating areas show some wear to one degree or another with the driver's seat being the worst and showing a few tears and deep cracking of the upholstery. Upfront a center armrest folds down for each of the driver and passenger. Door panels are blue, all clean, and have some chrome trimmings along with a wood appliqué panel which houses the power windows, seat controls, and side view mirror toggle. These panels are very nicely stitched and padded to the hilt. The original square and rectangle design dash is upfront and is topped by a blue padded dash top and sides. Inside are wonderful wood veneer appliqué panels which show in a crotch walnut grain pattern, and beautifully provide a background for the square chromed gauges. The steering wheel is also blue and has the wood appliqué with cruise control buttons at your fingertips. Climate controls, and a digital readout AM/FM/8 Track stereo unit with a Ford CB is inserted. Above is a nice tight clean headliner draped in blue, and blue carpet floods all floors presenting in respectable condition.

Drivetrain
A rise of the massive hood that the NFL could have played their last game on (yes…it's that large!) reveals a clean unrestored big 400ci V8. It is topped with a 2-barrel carburetor, and on back is a C6 automatic transmission. A Ford 9-inch rear is noted for the rear axle.

Undercarriage
Nice aged patina surfaces with copious amounts of surface rust are seen underneath. We do note some invasive rust at the rear of the frame near the bumper supports that will need remedied. Independent coil springs for the front suspension, and a 4 link with coil spring setup is on the back. Power disc brakes aid the stopping upfront, and power drums complete it on the rear.

Drive-Ability
This big 400 cubed engine Ford right up and idled with a whisper. However, our test drive was cut short as the brake pedal went to the floor when we pressed it. In the meantime, we were able to check other functions, and all were good with the exception of the reverse lights.

A cruiser in need of some TLC right out of 1979 that states “gas crisis be damned”, back in the day if you could afford the car, you could certainly afford the gas to go into it. A small price to pay for the ultimate luxury you are treated to on the interior, and visually you are an instant big shot with the exterior size. Cared for but not pampered, minimal rust, this car is late 70's luxury before the downsize candy, and it's in all day sucker form and size.