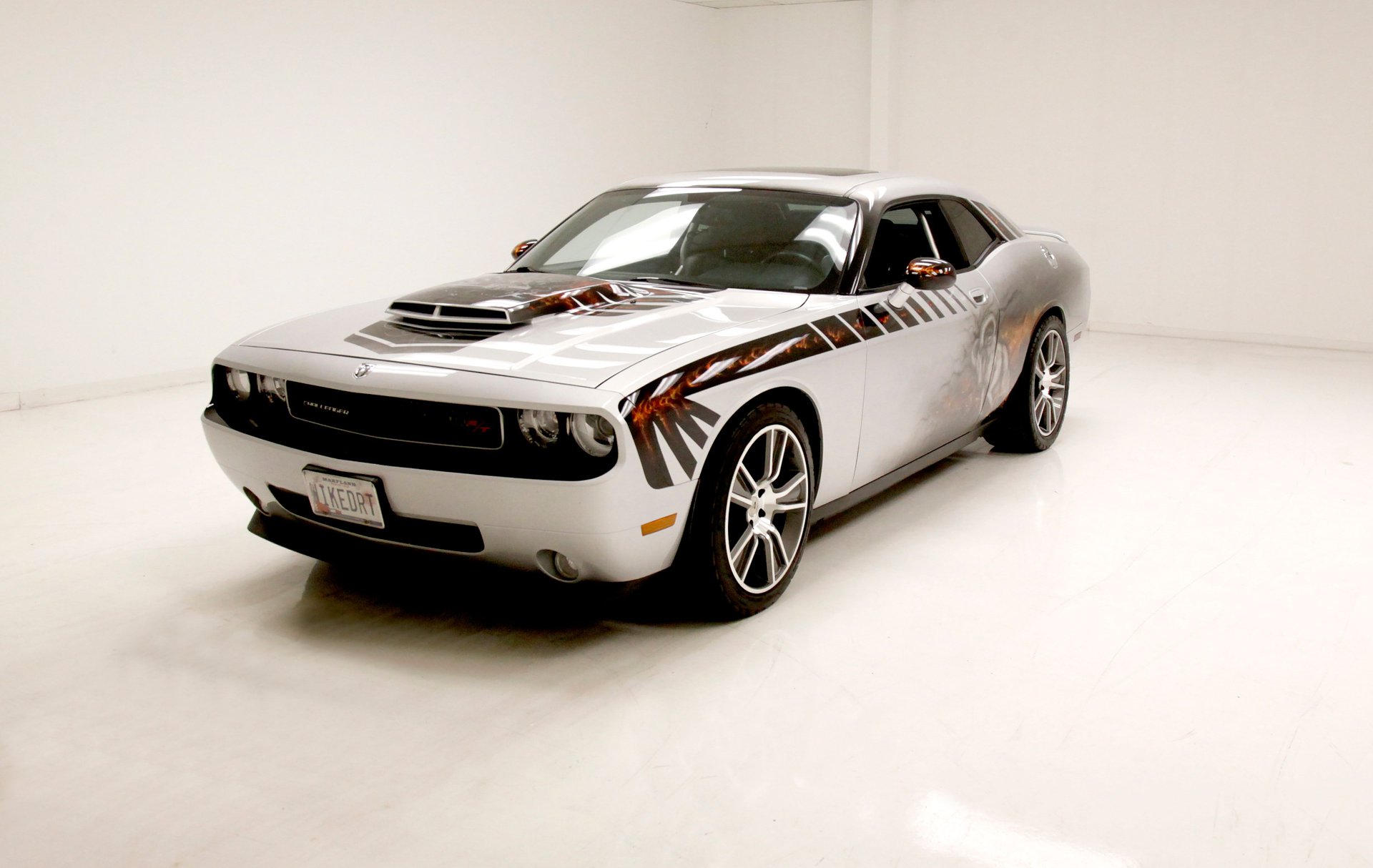 The Dodge Challenger is the name of three different generations of automobiles, (two of those being pony cars), produced by American automobile manufacturer Dodge. However, the first use of the Challenger name by Dodge was in 1959 for marketing a "value version" of the full-sized Coronet Silver Challenger. From model years 1970 to 1974, the first-generation Dodge Challenger pony car was built using the Chrysler E platform in hardtop and convertible body styles sharing major components with the Plymouth Barracuda. The second generation, from model years 1978 to 1983, was a badge engineered Mitsubishi Galant Lambda, a coupe version of an economical compact car. The third and current generation is a pony car that was introduced in early 2008 originally as a rival to the evolved fifth generation Ford Mustang and the fifth generation Chevrolet Camaro.

For consignment, a 2010 Dodge Challenger and this one is a custom build with snappy paint and plenty of build receipts with all the added goodies. This is the 3rd iteration of the car from Dodge, and now has a 392 stroker Hemi V8, and a supercharger, among other special additives. Custom airbrushing and painting on the exterior and a very unique and special car like none other is here for the plucking.

Exterior
This 3rd iteration harkens back to the muscle car Challengers of yore from the early 1970's but takes on a contemporary design of its own while doing so. A sleek oval grille with deep inset dual round headlights flank a central black egg crate grille. A black spoiler is below and above racing towards the cabin is a scooped hood. The steel is all bathed in light gray, however there are plenty of custom graphics adorning the car throughout. These include some of the retro strobe striping on the sides in black with airbrushed flames in the italicized rectangles which get progressively smaller as you go towards the rear of the car. The side view mirrors become artwork with some black and flaming as well. On top of the scoop in the hood it looks a bit like you are peering down into the engine from above with the exhaust pipes throwing flames and the top has a custom airbrushed artwork with a fire breathing ram atop a cartoon version of this car…can you say custom? A neat effect. Speaking of artwork, there are plenty of fades where the gray paint moves to total black on pillars and the rear quarters where we find more custom artwork with a Ram lunging forward within flames. This begins at mid door and runs through the rear quarter. Even the fuel filler cap is retro. More airbrushing for the rear deck just behind the rear tinted glass, and aptly naming this car Christine, knocked out of the flames in black. Also, some flourish pin striping and more flames on the rear bumper top giving kind of a neato effect. Big 20-inch Hurst wheels with retro styling from the 70's in speared off 5 spoke form and wrapped in low profile rubber on all 4 corners.

Interior
A swing of the sleek molded in black paneled door interior leads up to the passenger compartment which has a roll cage now installed. Within this cage are 2 nice leather buckets in black bolsters with lighter gray inserts. A center console also in black is mounted on the hump and between the buckets. The dash in front of the driver goes retro on us with the round white faced gauges deeply inset and cascading down from a central point. On the A pillar are gauges for the supercharger showing boost and air/fuel mixture percentage. In the center dash within the rise from the console to the dash is a 7-inch screen which doubles as a Navi and info screen and houses an AM/FM/CD digital stereo. A rear bench is in, however, with the roll cage rendering it nearly un-sittable. Black carpeting floods the floors and a shout to the trunk when lifted is lined in dark gray felting and has WICKED R/T Embossed in red in the center. Noice

Drivetrain
Lifting the engine graphic airbrushed hood, reveals an engine bay that looks more like an airplane turbine than an internal combustion engine. Here we have a 392ci HEMI V8 with Comp Cams and a 274 camshaft within. It is fed by EFI and there is a Procharger D1SC supercharger to assist the EFI. A 6-speed automatic transmission is on the back and the rear axle is a Wavetrac LSD version. For the exhale Kooks stainless steel headers provide the exit tubes.

Undercarriage
Pristine, A-1, Immaculate would best describe this undercarriage which is truly a sight to behold so take a gander at the pictures from our lift. Black and silver stamped floor pans, neatly organized brake lines, a snaking all stainless-steel dual exhaust, and not even a hint of dirt on the suspension. This consists of independent suspension all around, with power disc brakes doing the same. The disc system is a StopTech big brake kit which can be seen peeking out of the open spoked Hurst wheels.

Drive-Ability
We lit this candle and blew off to the test track. Here it has seemingly limitless acceleration, fantastic handling, and quick braking from those StopTechs. All was working swimmingly on this retro looking but definitely contemporary performing rolling work of art.

Take a look at the build sheet after you're finished feasting your eyeballs on this airbrushed, retro styled muscle car from 2010. A one-of-a-kind creation right here for the taking and displaying or enjoying or both!