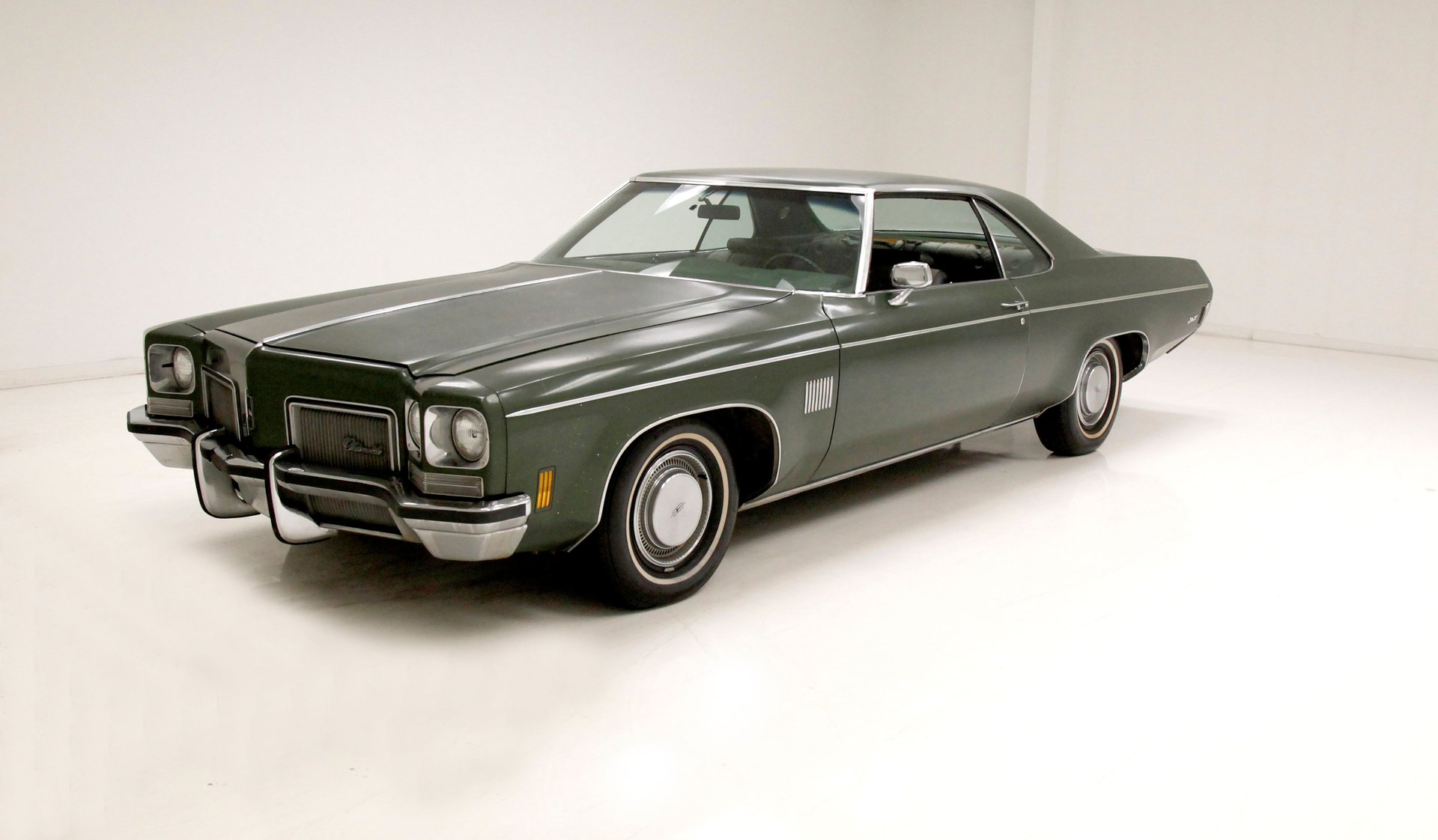 Oldsmobile introduced the 88 badge in 1949. It was named to complement the already-existing 76 and 98 and took the place of the straight-8 engined 78 in the model lineup. The new car used the same new B-body platform as the straight-6 engined 76 but paired it with the new 303ci Rocket V8 engine producing 135 horsepower. This combination of a relatively small light body and large, powerful engine made it widely considered to be the first muscle car. The Rocket 88 vaulted Oldsmobile from a somewhat staid and conservative car to a performer that became the one to beat on the NASCAR circuits. It won six of the nine NASCAR late-model division races in 1949, 10 of 19 in 1950, 20 of 41 in 1952, and was eventually eclipsed by the low-slung, powerful Hudson Hornet, but it was still the first real "King of NASCAR."

This former king is now large and in charge we have a barn find that had 1 previous owner. Yup, it's been sitting in Delaware for several years now and finally the estate sold it to our consigner. A little dulling, a little patina and a LOT of early 70's character we now have some class in our hallowed halls (other than when I walk through them!).

Exterior
This 2 door hardtop has a satin sheen on its Sequoia Green paint. The paint may be original to the car, as it has plenty of spots, chip offs, and even some drip damage from possible hard water? Bumpers are showing the beginnings of pitting and rust damage, although it is in its early stages. Dual headlights in V shaped coves have a split grille between them that runs above and below the large wraparound front bumper also in a V shape in the middle. Long, long, hood and front quarters glide rearward to the long doors, and another long trunk deck the has a nicely sloping line, ending in an upward angle and adorned with an upper and lower trapezius tail lamp shape, one light in the rear quarter edge, and one in the bumper. Thin trim spear, rocker and wheel well trimming are noted and looking in good condition. Big dish style wheels with machined flat round centers and some green paint for the edging, then wrapped in thin white side walls.

Interior
Richly appointed for this Royale trim we see padded silk central button squares lineup along the top edge of the door panel. A horizontal delineating trim piece then some molded vinyl for the armrest and door actuator in lighter textured vinyl. The lowers have a strip of faded green to brown carpeting. Inside a wraparound V shaped dash n square and rectangle design has all the instrumentation needed to keep track of this car's vitals. Green padded surrounds frame wood appliqué framing for the black faced instruments. Chairs are a front split back and rear solid bench. Both these shows as used and with the fronts being very soiled, and the back with the uppers coming apart. These seats have tuck and roll seats and 1/3 of the backs are covered with this material. The uppers are padded quaker patterns with a central button. These panels are in a slightly darker green. Carpeting is faded, stained and looks to have areas of bleaching. Above, the headliner is nice and tight and very clean.

Drivetrain
Under the hood is an unrestored engine bay within which resides a 350ci V8 that shows lots of patina and surface rust. It has a single 2-barrel carburetor and a 3-speed automatic on back (TH400). The rear axle is a 10-bolt 3.08 designation. The car has 50,093 original miles!

Drive-Ability
Its fires right up and on the test track did nicely. Good power, a nice smooth ride, and bias free braking. The radio did not work but all else was ticking.

A one owner barn find of this early piece of Detroit iron. Will need some TLC but when you are done, it will not be “Your Fathers Olds Anymore!”