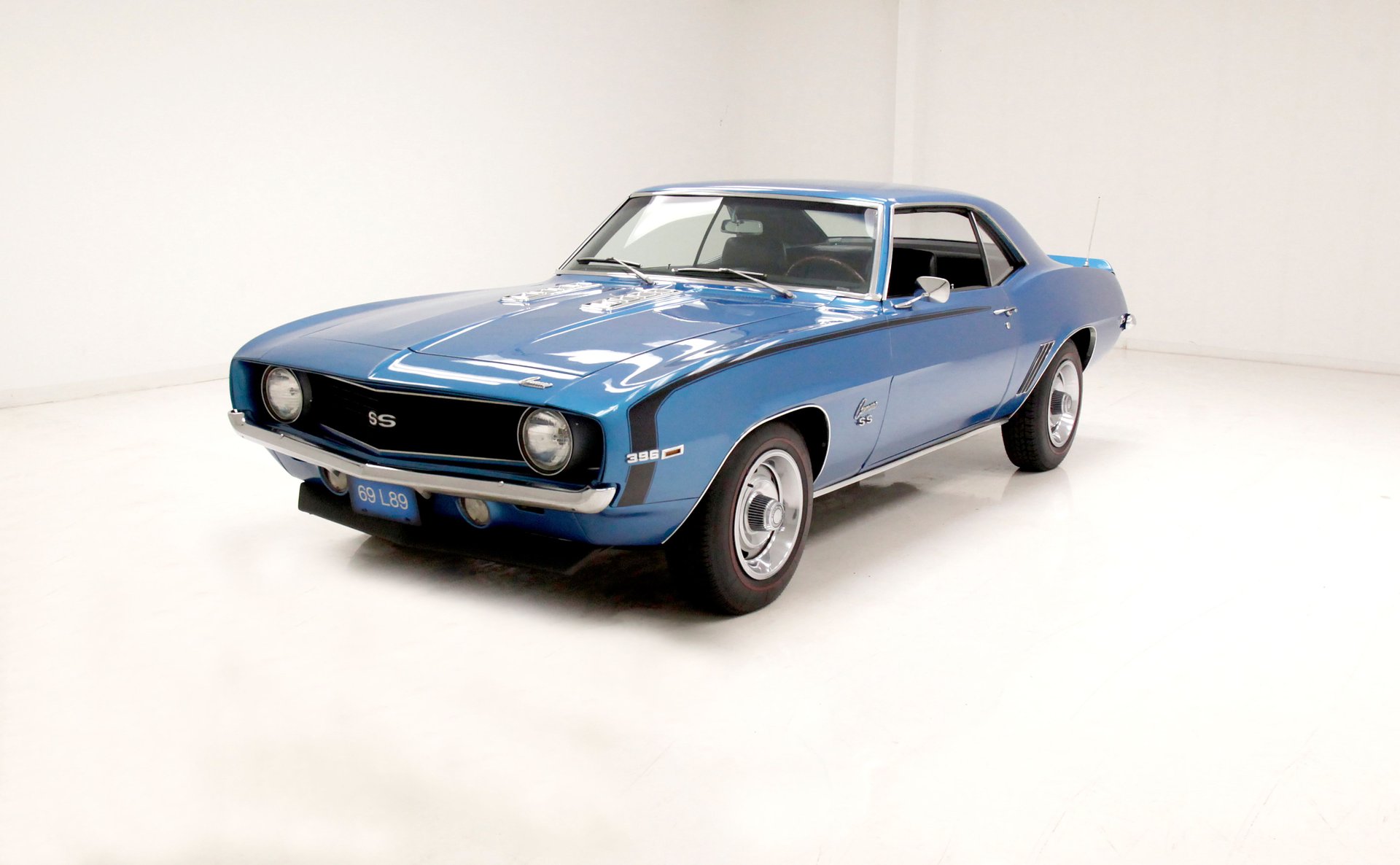 What happened in 1969? Major News Stories include The Beatles' last public performance, on the roof of Apple Records, First Concorde test flight is conducted In France, Boeing 747 jumbo jet makes its debut, Woodstock attracts more than 350,000 rock-n-roll fans, members of a cult led by Charles Manson murder five people, Chappaquiddick Affair Senator Edward Kennedy, PBS Established, The first man is landed on the moon on the Apollo 11 mission by the United States and Neil Armstrong and Edwin 'Buzz' Aldrin became the first humans to set foot on the Moon.

For consignment, a blast (literally) from the past in the form of the 1969 Chevrolet Camaro. This one is special due to it having an aluminum headed, consigner stated 396ci V8 AKA the L/89. It's build history is questionable due to some staggered stampings, with the date and suffix codes appearing to be hand done. Also note that the only areas that appear to have rusted are the areas with the stampings.

Exterior
LeMans Blue covers the steel slabs on this car, and upon close inspection of said paint we can see several inclusions which cover areas where body filler has been used. This is present on all panels including the roof. Rust bubbles are coming through the bodywork in the doors and rear quarters. On the front quarters which frame the sides of the single headlight black egg crate SS badged grille a racing stripe in black rises from the bumpers edge goes to the top of the front quarter and the streaks rearward to the door handles where it gets thinner and finally dies there. A 396 badge is within this stripe as well. Thin stainless trimmings wrap around the wheel wells, and a wider bar is covering the rockers. All other chrome and trimmings are in nice shiny states even the shark gills on the rear quarter prior to the rear wheel well and the louvered stacked intake vents in the hood. Topping the trunk deck is a spoiler in body matching blue, and the rear sports a trio of taillights in a black flat vertical panel, then this transitions to a shiny bumper and more LeMans Blue for the roll pan. The trimmed wheel wells frame 15-inch rally deep dish wheels which are wrapped in 205/75R15's red line tires on all 4 corners.

Interior
A swing of the doors and we can see black vinyl covered molded in door panels, and seats in the form of high back headrest buckets in front and a 2 plus 2 rear bench. Racing up the center is a pristine center console which houses the Hurst Competition Plus shifter, and a bevy of aftermarket gauges peppering the dash. Also, some wood appliqué panels are tastefully inserted throughout. Speaking of the dash, all original square inset gauges are fairly clean, and fronted by a rosewood rimmed tilt column steering wheel. Nice black carpet, and headliner all present as showroom, and a shout out to the trunk too as it sports a new checkered vinyl liner and has correct spare and jack setup.

Drivetrain
Under the hood is the consigner stated 396ci L89 V8. The heads are Winters Foundry aluminum heads. It now has a Holley 4-barrel carb, replacing the original which leaked when the consigner purchased the car in '93. A date correct Muncie M20 4-speed manual transmission is on back, replacing the leaky original. This pushes power to a 12-bolt rear with 4.10 Posi gears. Factory exhaust manifolds flow out of a beautifully restored Chevrolet Orange painted block, snazzy polished ribbed valve covers, and a chromed air cleaner housing. All hoses are nice and supple, and everything else is gleaming and screaming for attention under this hood.

Undercarriage
A replaced fuel tank now in the back sits in a black painted undercarriage field. It appears the rear frame over the axle has been repaired and is now structurally sound, however the rear floors show rusting out. Independent coil spring suspension is on front and leaf springs for the rear. Power disc braking is on front, and power drums for the rear. Chambered exhaust is now on along with new sub frame bushings and motor mounts.

Drive-Ability
This nice '69 example fired right up, ran very nicely and handled all the challenges of our test track. We have a critical eye for anything not working and found the reverse lights not working. With nothing else wrong, it was an enjoyable test drive.

A good all-around nice Camaro SS with some spots which will eventually need some TLC. Overall good and mostly original interior. “Tranquility base here…the Eagle has landed!”

Offered at $48,500
view inventory
Thank you for your interest! We'll get back to you soon!
Speed Digital