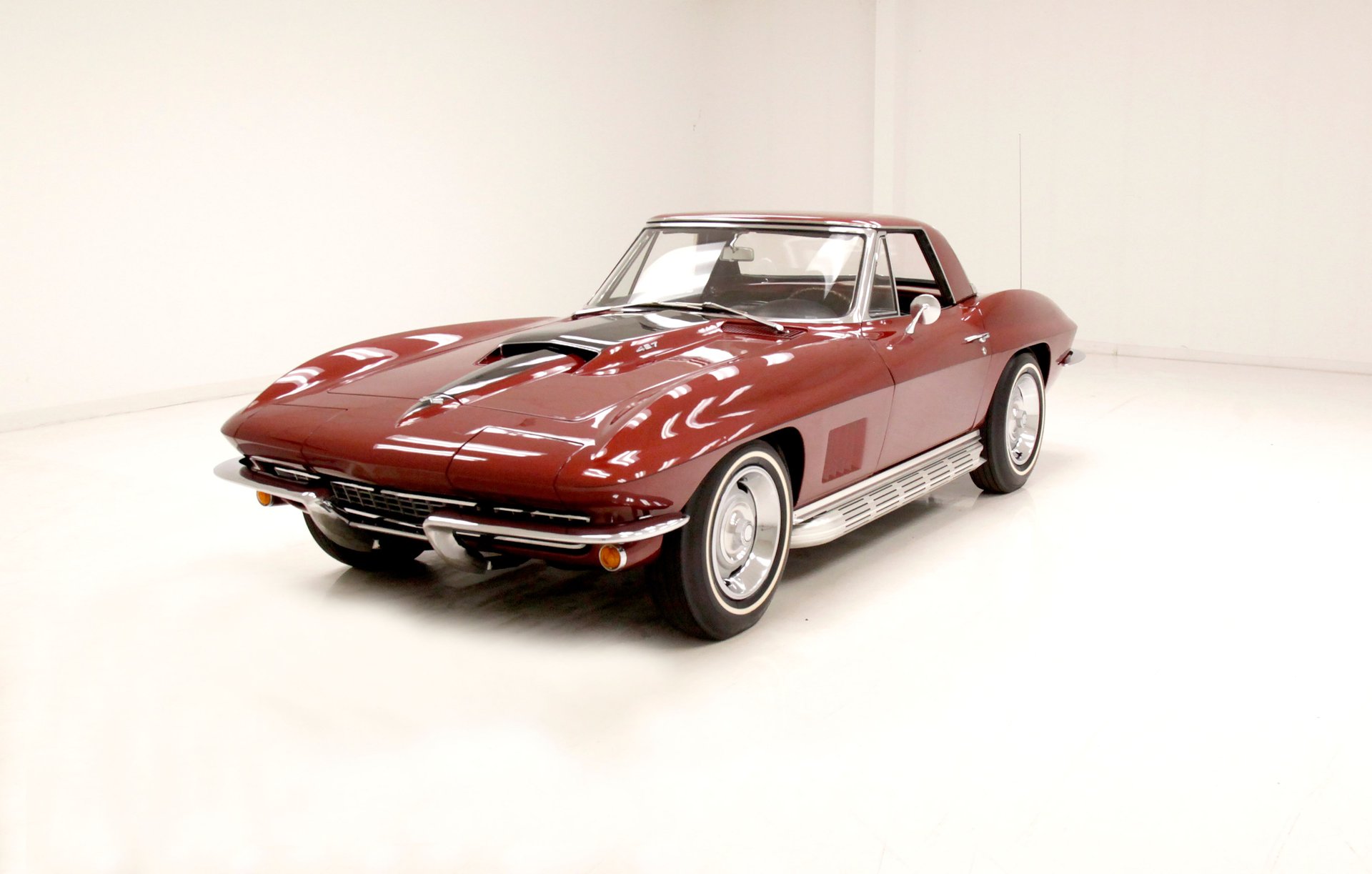 Sting Ray (two words) was first used on the 1963 Corvette and remained throughout the C2 generation. The C3 debuted in 1968 without the Sting Ray name, but it reappeared on the fenders of the 1969 model as one word, Stingray. It would remain there until 1976.

Sting Ray (two words) was first used on the 1963 Corvette and remained throughout the C2 generation. The C3 debuted in 1968 without the Sting Ray name, but it reappeared on the fenders of the 1969 model as one word, Stingray. It would remain there until 1976.

For consignment, a car owned for 54 years by one ultra-passionate owner who got plenty of enjoyment from this Corvette; even searching for it originally was a very selective process prior to choosing this particular one. Our consignor is a friend of the original owner, who passed away earlier this year. This car is sporting nearly all of its original paint, original interior, and chrome. It has its original convertible top, and was purchased originally at Klick-Lewis Chevrolet out of Palmyra, PA. Add in some niceties such as a placard with some history of the car, the chassis service and overhaul manuals, original owner's manual, advertising brochures, owner's logbook, radio and jacking instructions and last but not least the warranty booklet and ever so important Protect-o-Plate. What more could a Corvette aficionado ask for?

Exterior
Marlboro Maroon, (Red), which I can add is mostly the original paint on this car. Showing off with a black “Stinger” big block hood scoop, shark-like “gills” as side intakes on the front quarter panel, and showroom chrome. A factory optioned side piped car, they just add gleam to the rockers. The shark nosed and pointy rear are classic in this Zora Arkus-Duntov-influenced car. Chromed bumpers are split and looking great. Ultra clean wheels with deep dish trim are wrapped by thin line Goodyear bias ply tires all around. The original white canvas convertible top (with the original 367 date stamp) was rarely used, and remains in excellent condition. Also, this car comes with its original body matching hard top with a beautifully curved rear glass. A few faults, some overspray from a previous repair where the original owner had a minor mishap that damaged the right rear bumper and splash guard, resulting in a $25 body shop charge.

Interior
Keeping notes, this meticulous owner even documented when he first laid eyes on the car! Along with the salesman and a few gripes he had to the fit and finish which was settled by the dealership. Pristine black leather buckets sit in front of a dual “eyebrow cowling” dash which includes perfect condition embedded gauges on the driver's side, and a curved glove box on the passenger. The odometer reads an amazing 22,838 miles which are confirmed. This speedo and the other instruments flank a center vertical pillar that houses a large clock, airflow knobs and a vertically mounted Corvette AM/FM radio. Moving downward and between the seats, the console houses a factory chromed knob topped shift lever. Fronting the dash is the original steering wheel that is covered in lacquered teak. Bomber style low back buckets have aged nicely, and float within like-new black carpet which covers the floors, and the rear storage area for the top and some extras.

Drivetrain
The owner's notes describe that after two months, the engine developed a knock. Back to the dealership it went where they tore down the engine and discovered the number 2 cylinder wall was grooved from a bad piston. So, this car has a warranty replacement OEM 427ci V8 a few months newer than the rest of the car. A single 4-barrel carburetor (believed to be the original) is on top to feed it. The intake codes out as original and correct as does the numbers matching Muncie M20 4 speed manual transmission with a new clutch plate and throwout bearing. A 3.55 numbers matching Positraction rear is spinning the rear tires.

Undercarriage
An extremely clean, even sporting a shine in most areas, undercarriage, is seen all underneath this car. All looks like new with disc brakes all around, and independent suspension. Rockers and floor pans are very solid and barely even have road dirt on them.

Drive-Ability
This car fired right up but we were very careful not to put too much clocking on the odometer due to the low miles. Also, the tires are very old, (from the 1980's), when the car's original owner stored the car until very recently. All was working and it really is a wonderful car with a great back story.

The passion and pride of ownership this car's long-time owner set out to produce his perfect vision of the '67 Vette. Some minor parts were replaced or repaired over the years, then some time in climate controlled storage, a replacement engine due to a warranty issue, the additional hardtop, a big block hood, and other small items in the attention to detail department. All original parts have been retained, but honestly the way this car shows and goes, I would not change a thing. Why mess with perfection? The notes are a good read and reflect a passionate owner.

Offered at $25,900
view inventory
Thank you for your interest! We'll get back to you soon!
Speed Digital