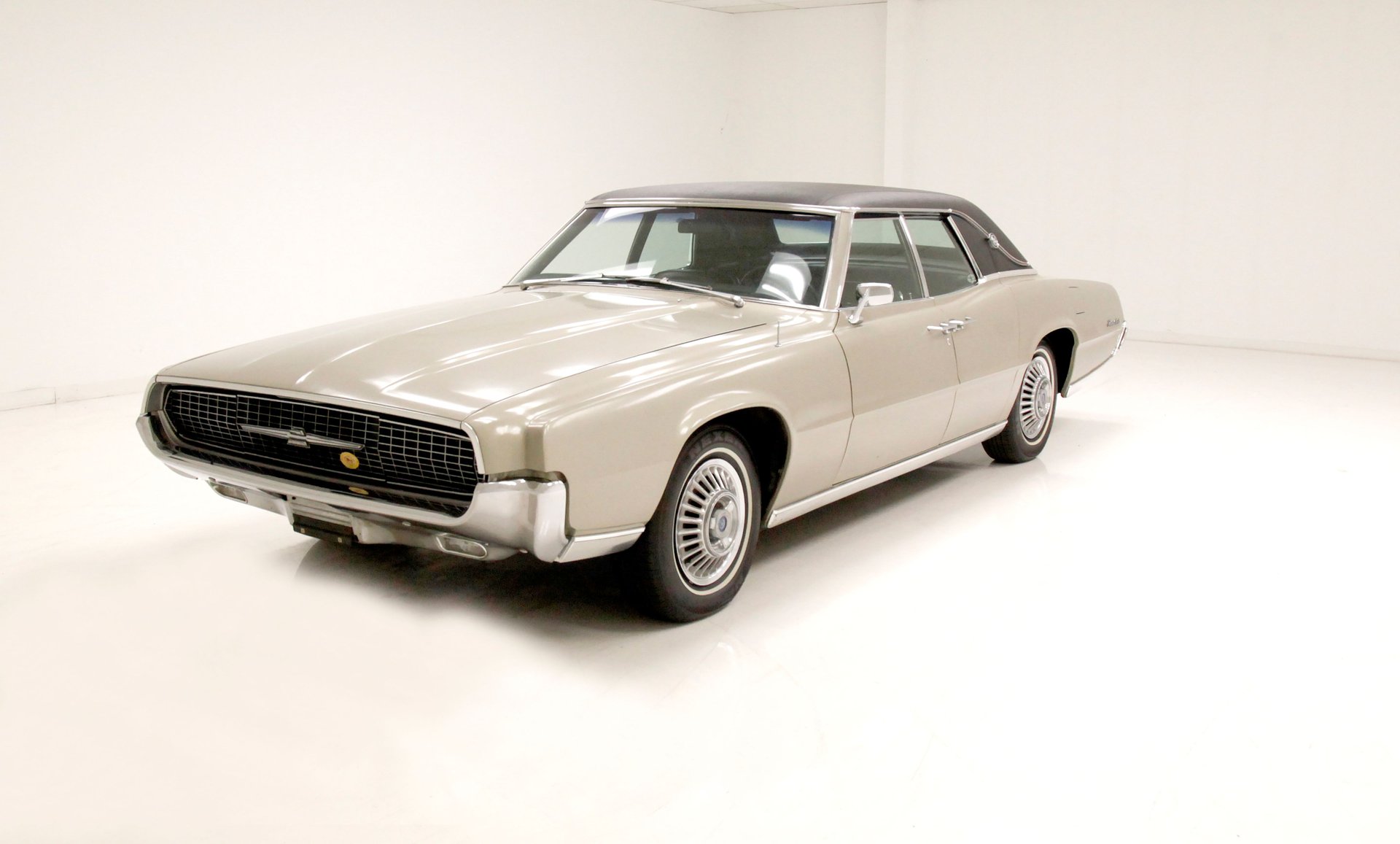 For consignment something not oft seen, possibly due to its obscurity in the lineup of Bird designs. That and the survival rate of these cars is low due to rust issues. This example is in original condition, nicely preserved with sequential taillights, hidden headlights that actually un hide, disc brakes for the front, and suicide rear doors sharing a common B pillar.

Exterior
For the front grille design think largemouth bass with its wide mouth egg crate grille with hidden headlights covered in the egg crate to create the illusion that there are no headlights. A curved upward on the edge bumper below is nice and shiny, and the curved down on the edges hood meet at the front quarter panel beginnings. A long sleek T bird badge is in the center. All straight steel panels are bathed in factory Medium Palomino Metallic. There are nice trimmings around the glass and a stainless rocker graces the line from the front bumper and stretches the length of the car. On top is a Cayman grain vinyl top in black and it sports landau bars on the rear pillars. This 4-door version has suicide doors for the rear openings. A nice slowly curing downward rear deck meets up with a horizontal rear deck panel that houses sequential taillights, emulating the front with the wide mouth design. Turbine style wheel coverings have faux knockoff hubs and thin whitewalls on all 4 corners of this neat design car.

Interior
The T Birds of yore are famous for utilizing a band of brushed or machined aluminum that starts on the door panels and runs through the dash, and this car uses a satin finished brushed aluminum which runs through the doors with black vinyl uppers and armrest, and a band of black carpeting below. Inside a seamless console races through the back vinyl buckets in low back form. These chairs have tuck and roll in seats and smooth bolsters. For the console more brushed aluminum and black molded plastic as it rises to the dash. The dash has 4 deep inset round gauges lining up along the driver's side then some futuristic temp/wiper washer sliders. In back is a rounded similarly styled rear bench with a central armrest. All seats are excellent and original, as the slide to the side steering wheel and column are all original. Nice black carpeting for the floors, and a textured black vinyl headliner is tight above. Also, the landau bars make a cameo appearance framing the rear courtesy lights in back above the rear bench.

Drivetrain
Under the hood is a wonderfully preserved and highly detailed 390ci V8. It sports a blue block and blue valve coverings. There is a 650cfm Holley 4 barrel on top, which is not original but certainly gives it wings! On the back a C6 3-speed automatic transmission to float you down the highway, and a Ford 9-inch 3.00 gear rear axle saves you gas while floating.

Undercarriage
Some invasive rust has taken over the secondary mufflers in the way back of this car, although the remainder of the H pipe exhaust is surface rusted but no holes, as are the primary mufflers. Matte black undercoating is in overall good condition for the floor pans and rockers. Some light surface rust is on the very edge of the rockers. Independent coil sprung front suspension, and a 4 link with coil springs on the back, power disc brakes for thew format and drums for the rear.

Drive-Ability
A quick starter and smooth acceleration took me to the test track. Here it performed well with all working functions, good handling and bias free panic stopping. All original for sure.

A fine example of this iteration of the bird, most all original, and a classic bird of a different feather. Come see it in our hallowed halls before it gets snapped up. An HOPF award winner @ Hershey in 2019.