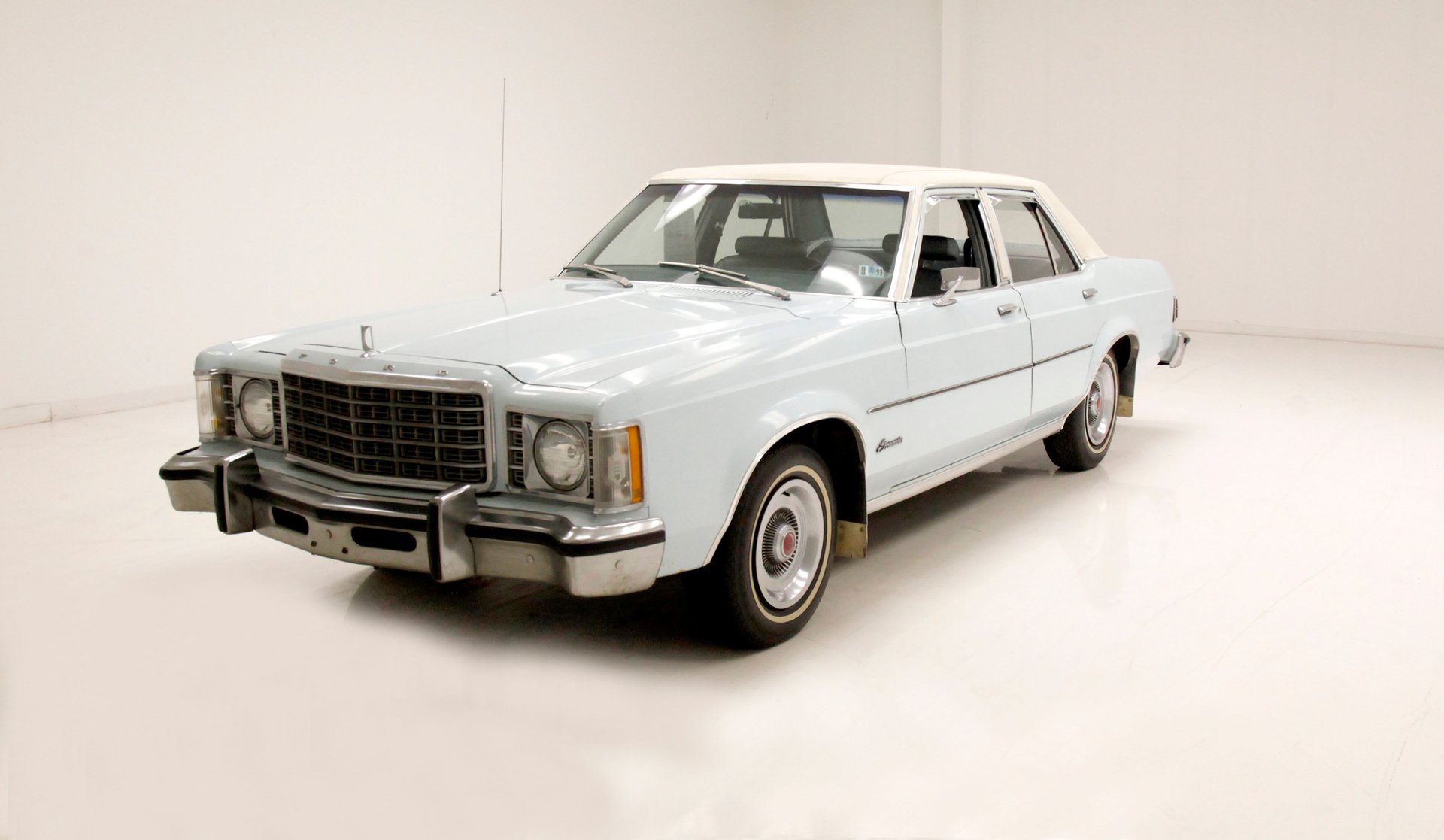 The first generation of the Granada was introduced for the 1975 model year, slotted between the Maverick and the Torino within the Ford product line. Originally intended as the successor for the Maverick, the development of the Granada was heavily influenced by the 1973 oil crisis. In response to increased demand for compact-segment automobiles, Ford continued the production of Maverick (through the 1977 model year); the Granada was repackaged as a premium vehicle in its segment. Ford compared the Granada to the Mercedes Benz 280 in its Bicentennial promotional brochures too. For instance, the Granada had a whole 2.2 inches more length versus the Mercedes. Plus, the Ford cost about a quarter of the price of the German sedan. The ride was fairly rough and nothing like a Mercedes-Benz of the day but Ford still sold approximately 302,658 for the inaugural year.

For consignment and gracing our hallowed halls here at the Classic Auto Mall, we present to you a 1st year Ford Granada in Pastel Blue. Believed by our consignor to have been garage kept most of its life, was owned by her brother prior to her tenure and used in parades and was purchased by her brother from a woman whom he went to church with who could no longer drive. Talk about living the storybook tale of a car's life!

Exterior
Having a body design reminiscent of the cars I drew in elementary school, the Ford designers hit the mark with the KISS design but managed to add some class and styling cues from the Mercedes drawing board. Wearing what is believed to be the original Pastel Blue paint this car shows with only minor paint scratches, scrapes and dings. An egg crate grille styled grill with miniature egg crates within each section is flanked on either side by round headlights with bezels that mimic the grille. A large and in-charge chrome bumper with the federally mandated crash bumperettes sits proudly down below and shows in good condition. A white vinyl top covers the roof and presents in tear free condition with only minor staining. The rear bumper mimics the front in both condition and design. Sitting just above are clean brake/signal/reverse lights with a centrally located fuel filler cap with Granada written in your grandmother's script. Thin white wall tires adorn each corner and a factory correct hubcaps give the car some pizazz.

Interior
A swing of the driver's door and we are met with a smooth blue vinyl door panel with a center ribbed vinyl section surrounded by a thin wood applique for some added class. Within this section of the panel is the armrest, chrome window crank and door release. Carpeting covers the lower section. Twin blue vinyl buckets provide your posterior comfort up front with a central tuck and roll pattern while a bench seat in the same pattern reaches from rear door to rear door. A simple but effective dashboard wrapped in a swirled wood applique fronts the original steering wheel and contains the speedometer as well as an AM radio, temperature controls and knobs and slides for the wipers and lights. A soiled blue carpet covers the floors, and a tight blue headliner hangs above.

Drivetrain
Under the hood within the patina filled engine bay is the original 302ci V8 sporting shiny blue valve covers and an air cleaner assembly to match. A 2bbl carburetor tops the engine and on the back is a C4 3-speed automatic. Bringing up the back end is a Ford 8.7" rear axle assembly.

Undercarriage
Covered in the factory undercoating this underside is remaining rust free. Only surface rust has developed on the suspension and exhaust components, mostly unremarkable down here. Independent coil spring suspension is up front while leaf springs bring up the rear. Power front discs provide the stopping power for the front and drums are on the rear. A stock style single exhaust system sends spent gasses out the rear.

Drivability
After pumping the gas a few times, the Granada came to life. All went well on the test drive with adequate power thanks to the V8, handling was adequate, and braking was spot on. We did note that the fuel gauge seems to be nonfunctional and the trunk, while having a key, does not open. Also, the new buyer may want to perform some work on the heater blower as an unpleasant smell is carried through the ducting when the fan is turned on.

Regardless of Ford's comparison this isn't a 280 class Mercedes Benz. It is a rock solid performer from the malaise era of American automobile manufacturing. A good body, classic style, and a solid chassis can give you a great start as an entry into the classic car world. Elegance in a new efficient design indeed!