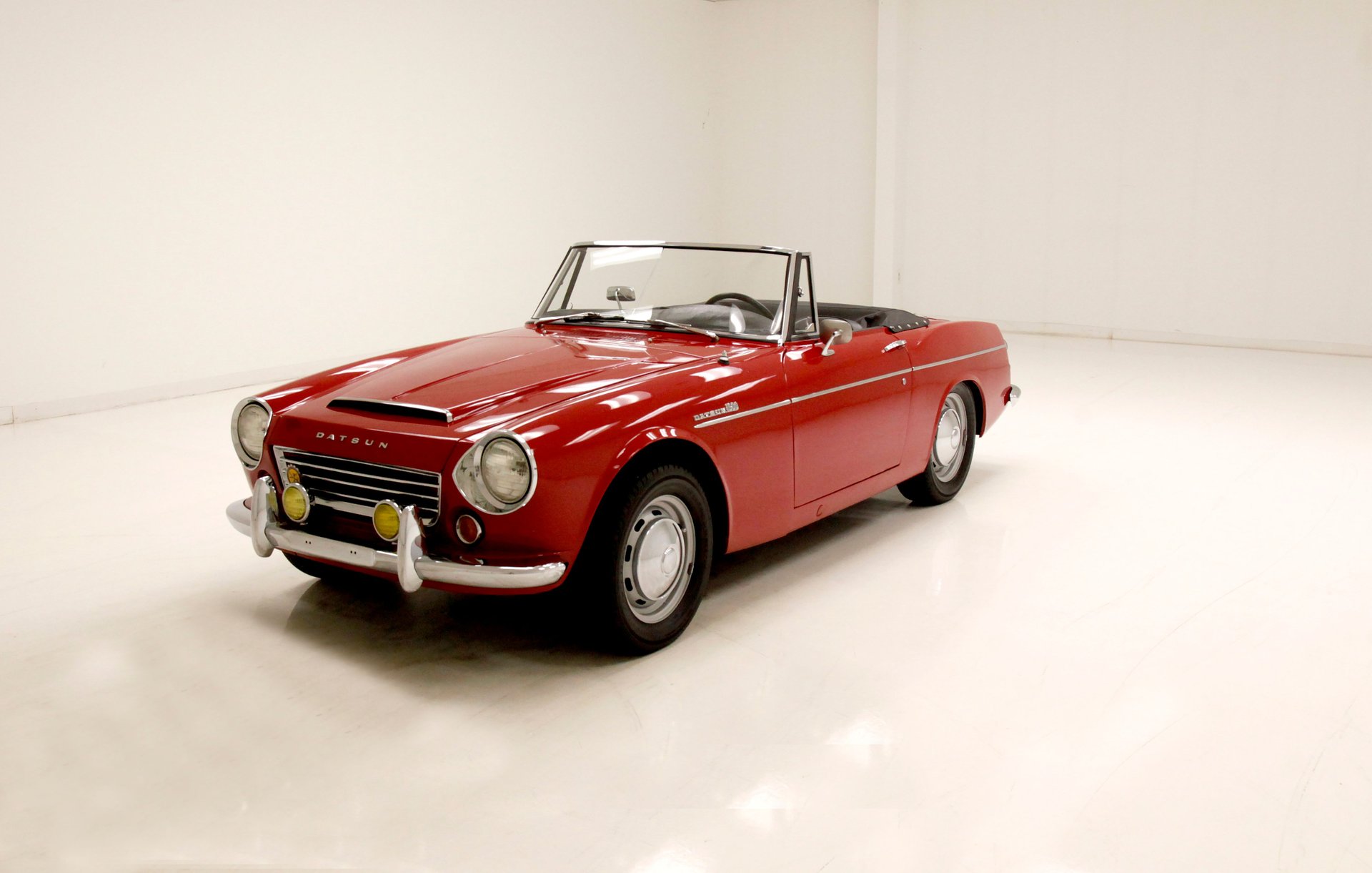 The Datsun Sports, (called Datsun Fairlady in the Japanese and Australian markets), was a series of roadsters produced by Nissan in the 1960s. The series was a predecessor to the Z-car in the Fairlady line, and offered a competitor to the European MG, Triumph, Fiat and Alfa Romeo sports cars. Beginning with the 1959 S211, the line was built in two generations: the first generation was largely handbuilt in small numbers, while the second generation (310 series) was series produced. The second generation first appeared in 1961 and continued through 1970 with the SP311 and SR311 lines.

For consignment, an early, (low windshield), 1967 Datsun 1600 Roadster. This car has undergone several sessions with cosmetics and some extra wrenching on any parts that were not necessarily in need of repair but were worn enough to warrant their replacement. Some spice has been added to the engine, and the paint although not concours quality shows very nicely with all that chrome which is adorning this cute sports car.

Exterior
As it actually came earlier than the MGB it does look like some influences were either shared between the companies or some spying was going on both sides. A Triumph like front grille with the deep bezels for each single round headlight, round turn signal below, and dual fog lights attached to a shiny front bumper. A thin tasteful hood scoop helps the engine inhale, and a straight long hood makes its way back to a new NOS windscreen and surround. Gaps for steel panels are nicely aligned, all bathed in beautiful red paint, with just a few areas showing some fault in this otherwise deep paint. Just below the belt line is a thin chromed trim spear that runs from stem to stern. On the back, nice mid century modern inspired deep bezel round taillights cascade downward from the top of each rear quarter, which sports a small fin. These trios of taillights are flanking a pristine rear bumper with 2 vertical protective bars on either side of the license plate. Steel wheels in silver and polished dog dish style hubcaps are on all 4 corners. A note that the black canvas top has a new frame and a clear rear plastic window.

Interior
On either side of a glove boxed chrome trimmed center console are black vinyl bomber style bucket seats. These are in excellent condition as is the dash which is upfront and black padded vinyl topped with a front black panel. In here are all the necessary instruments all very clean, and shining bezels looking great in the black field. In the center of the simple but effective dash are a trio of round gauges along with a central mounted chronograph style clock. Just below is a lineup of toggles, and below that temp and airflow controls and an AM radio. Nice black carpeting is flooding the floors and a like new tonneau in black adds a good contrast to the red, as well as hides the top when in the down position. Black vinyl door panels are framed by red painted uppers and sides and a white accenting strip of vinyl covers the bottoms of these panels.

Drivetrain
With a complete and extensive rebuild of the engine just last year, some spicy additions were snuck on for a bit of extra performance. A company known as C2 Competition undertook this task, and now the 1600cc 4 banger has a milled crank, (.25), polished valves, new pistons, rings bearings, new valve springs, and guides. There is a new carburetor setup featuring dual SU carbs. On back is the original 4- speed transmission which was rebuilt in 2018 The rear axle weighs in at 3.889. All looking very clean and green under this hood. Electronic ignition is also now replacing the original points system.

Undercarriage
I'd have to say all very nice underneath, painted black, no rust, and all mechanicals underneath are working as they should. An X frame is present, and rockers and floor pans are all solid. Disc brakes are on front, and drums on the back. New ball joints and new upper and lower control arm bushings are seen.

Drive-Ability
This my fellow car-patriots is a great little car. The Japanese were smoking the Brits and as time went on it would only get worse on the Brit side. As far as I know the Japanese are still in business and producing cars that are sporty examples that took their lead from this model. Driving experience was overall good however the radio and heater blower both were nonfunctional.

A complete documentation of work performed, owner's manual, sales brochures, and complete vehicle service manual. Called “a pure vintage sports car” by Car and Driver in the day, it's a looker and will be surprisingly successful at stunning the competition.