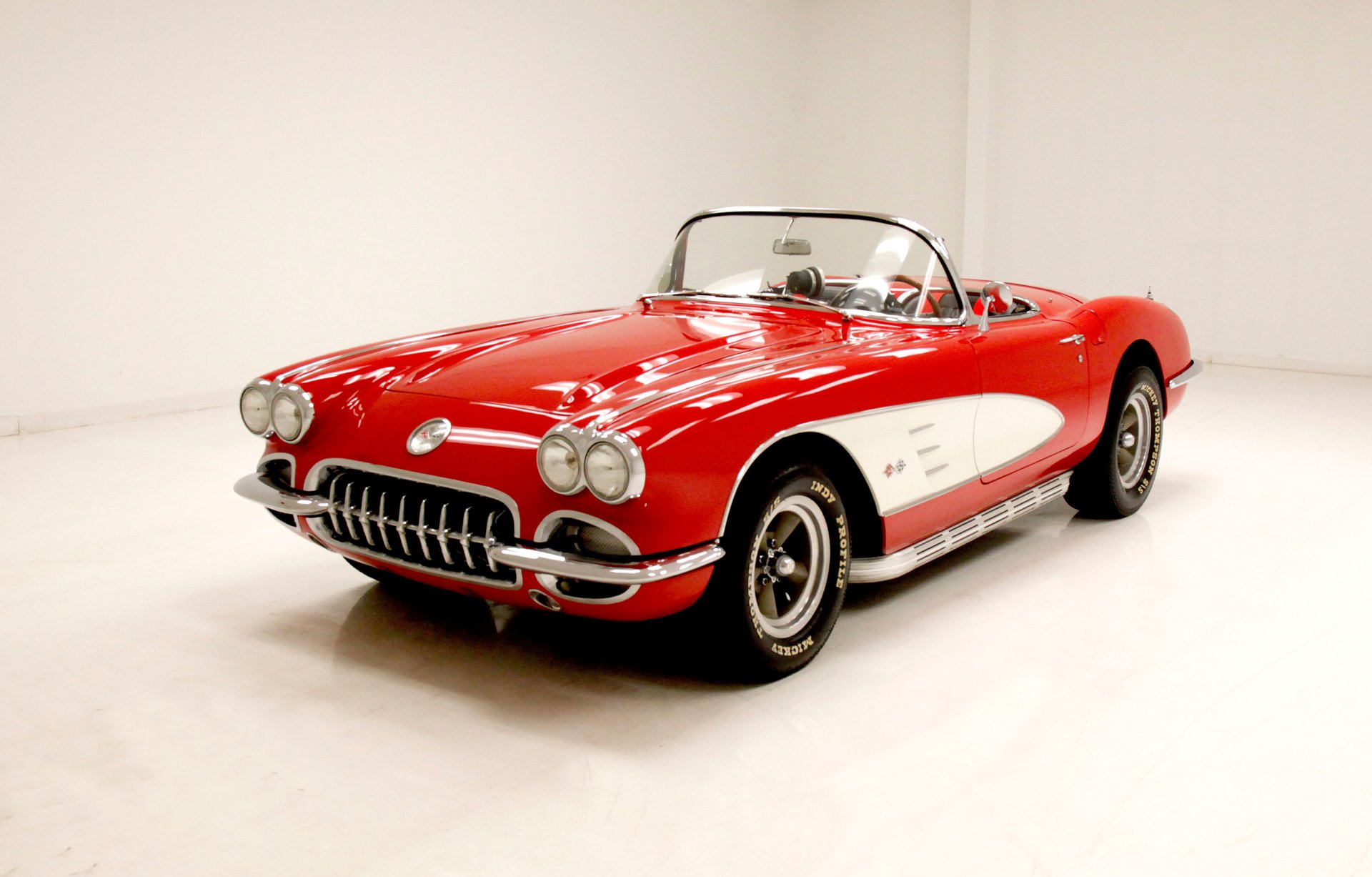 The Sixties was a decade of rocketships — both NASA's thundering moon machines, and the rubber-burning road missiles launched by the Corvette engineering corps. As Chevy poured on the horsepower, it also forged what was to become one of the most famous names in Vette lore: Sting Ray. The popularity of Chevy's sleek two-seater was now abundantly clear: 1960 marked the first year that Vette sales topped five figures (the company produced 10,261). Mechanical changes consisted primarily of a few weight-cutting measures. After this year, the molded rear taillights would be history.

Now for consignment and showing in Viper red with white coves, this once dubbed “Tahitian Princess” and modified to fit the part was purchased by our current Consigner in 1991 and the restoration to a 1960's style hot rod began in earnest. To the car we see before you today which is modified but in a good way to enhance performance and drive-ability.

Exterior
With the benefit of a stripping down to the gel coat, flaws repaired, and existing rust remediated, it was then bathed in a Viper Red with white coves. The dual headlights toothy grille opening wide and framed on either side by split bumpers, a large hood cross flag badge leads the way for us. Dual headlight bumps are retained on the front quarter tops, and a bump in the hood showing early signs of what would become the hood scoop. A chrome edged curved front glass, the white painted Corvette cove with a trio of thin trim horizontal pieces coming from the opening, and more crossed flag badging this car retains very much of its original pen design from the factory. Side pipes from a big block 1965 were installed, a nice canvas convertible top is retained, and of course the rounded rear quarters with the long curved taillights on what used to be fins but now long gone with the 1950's! 15-inch Torque Thrust wheels in matte gray 5 spoke design are wrapped with raised white lettering Mickey Thompson Indy Profile rubber. Noted, a hard top also comes with this car and is covered in black vinyl for some extra wow.

Interior
Sporting somewhat of its original dash with the single eyebrow in front of the driver and cut in “Jesus bar” for the passenger, the dash is now ripe with bolt ons for extra monitoring. These include a shift light tachometer mounted to the center dash and updated round gauges in front of the wood rimmed rally steering wheel. In the center an aftermarket radio has been mounted, as well as a wood panel to house some knobs and pulls. A beautiful job was done on the center console which now has nicely rounded horizontally opposed tuck and roll ribs as a covering for the shift lever and ash receptacle. This tuck and roll also makes an appearance in the door panels and is also utilized on the seat inserts. Black vinyl with smooth bolsters covers these bomber styled buckets which fit neatly into the dual curved rear fiberglass tonneau covering for the top. Rising vertically between the seat backs is a metal door glovebox and a button to open the tonneau covering. Of note are red RCI racing seat belts. Black carpeting is covering the floors and doing a great job of it! The underside of the hardtop is done in vinyl which mimics the door panels and console cover.

Drivetrain
Under this hood is a complete surprise when opened forward. It is a gleaming all polished 350ci ZZ1 V8 that can pump out 350hp. If this is not enough then flip over to the Nitrous Oxide system and add in another 150 horses. Normal aspiration uses a 4-barrel carburetor, Nitrous gives its extra drinking capabilities. On the back is a Super T-10 transmission with a custom shifter, and a Ford 9-inch rear and new rear springs.

Undercarriage
A nice heavy coating of rustproofing is now seen, and it is good, because it is not being used to cover any underlying rust. Independent coil springs are on front, and on back are leaf springs with traction bars. Drum brakes are on all 4's.

Drive-Ability
A great driver and plenty of kick in your seat when you press on the accelerator and we did not even put it on the bottle. An excellent job to tastefully modify this car to be a much easier driver and great to monitor all its functions while doing so. Unfortunately the factory tachometer was not functioning, but all else worked just swimmingly.

Original then modified to be the “Tahitian Princess” then brought back as a modified street rod, this car retains its original looks, and interior but made just a bit better. This holds true for the drivetrain which is all buttoned up and polished to give the driver 350hp or boot it with the bottle for 150HP extra!