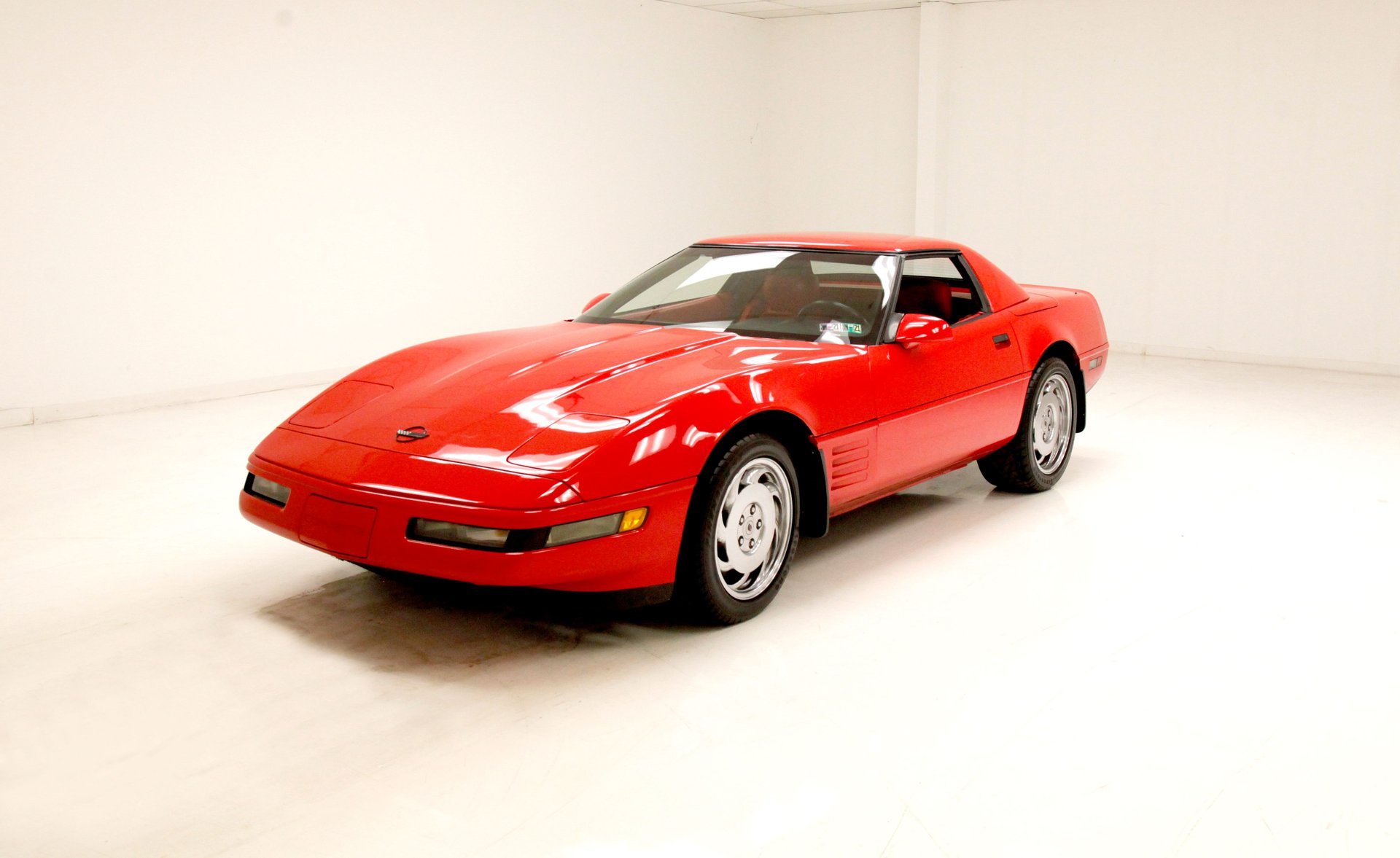 1993 marked the fourth decade of America's sports car with a very special commemorative edition, the 40th Anniversary Edition. This was an option package that was made available on all 1993 Corvette models, Coupe, Convertible, and ZR-1.

Dressed in all wonderful Torch Red, even the red interior, this is a shining example of the 1993 Corvette. Only 41,485 miles on the clock, and it has been well taken care of. An overall clean car, and the hard top is removable, and it reveals a white convertible top. So, all weather and season driving can be had.

Exterior
This 40th year anniversary Vette is bathed in Torch Red. Overall it is nice but there are a few areas of some light crazing of the fiberglass, along with minor dents and scratches in the paint. Cleaner, less curved, boxier lines dominate the exterior, and are even utilized on the rectangular chromed exhaust tip and rounded over square tail lighting. The iconic finned cove now relegated to the front quarter panels serves to let some fresh air into the engine bay. Chrome aluminum turbine style wheels are noted on all 4 corners and have been specially triple chromed for some extra bling.

Interior
Spectacular red leather for the buckets which have extensive bolstering to keep you in the seat when negotiating a tight curve. The driver's seat has a few cracks and wear off of the red at the entry side. The high backs are embroidered on the headrest with the 40th anniversary badge. Racing between the buckets toward the dash is the center console, which houses a glovebox, seat controls, and the automatic shifter. Swooping skyward and curving toward the driver's side it rolls upward and forms the instrument cluster. Pre digital dash, analog gauges are noted. There is an information center in the middle of the dash, however it is only a cluster of warning lights and not a full screen, (give it time they were working on it!). Nice red carpet covers the floors and door panels, which have a black accenting that flows toward the black dash. Note the dash has an orange background LED readout, and the remainder of the interior where black background houses buttons are labeled in orange.

Drivetrain
A 350ci LT1 V8 is nicely preserved within the engine bay, and presents very clean, no corrosion and regularly shined plastic parts. This engine is fed by multiport electronic fuel injection and has an automatic transmission on back. A 2.59 rear axle completes the drivetrain package.

Undercarriage
Underneath all clean with no rust surface or otherwise. Good suspension, (C4 all around), and power disc brakes to stop these 17-inch wheels in a hurry.

Drive-Ability
A good driver, good handling, and nicely preserved interior which is original to this car. All mechanicals worked including A/C, and power steering makes this car a breeze to drive, and so does putting the convertible top down!

Clean, buttoned up 40th anniversary year car in wonderful Torch Red. correct badging, and the 350ci LT1 engine. Put the top down, and start celebrating the 40th anniversary, or pop the hardtop on and play in the snow. Either way you'll have a ball!