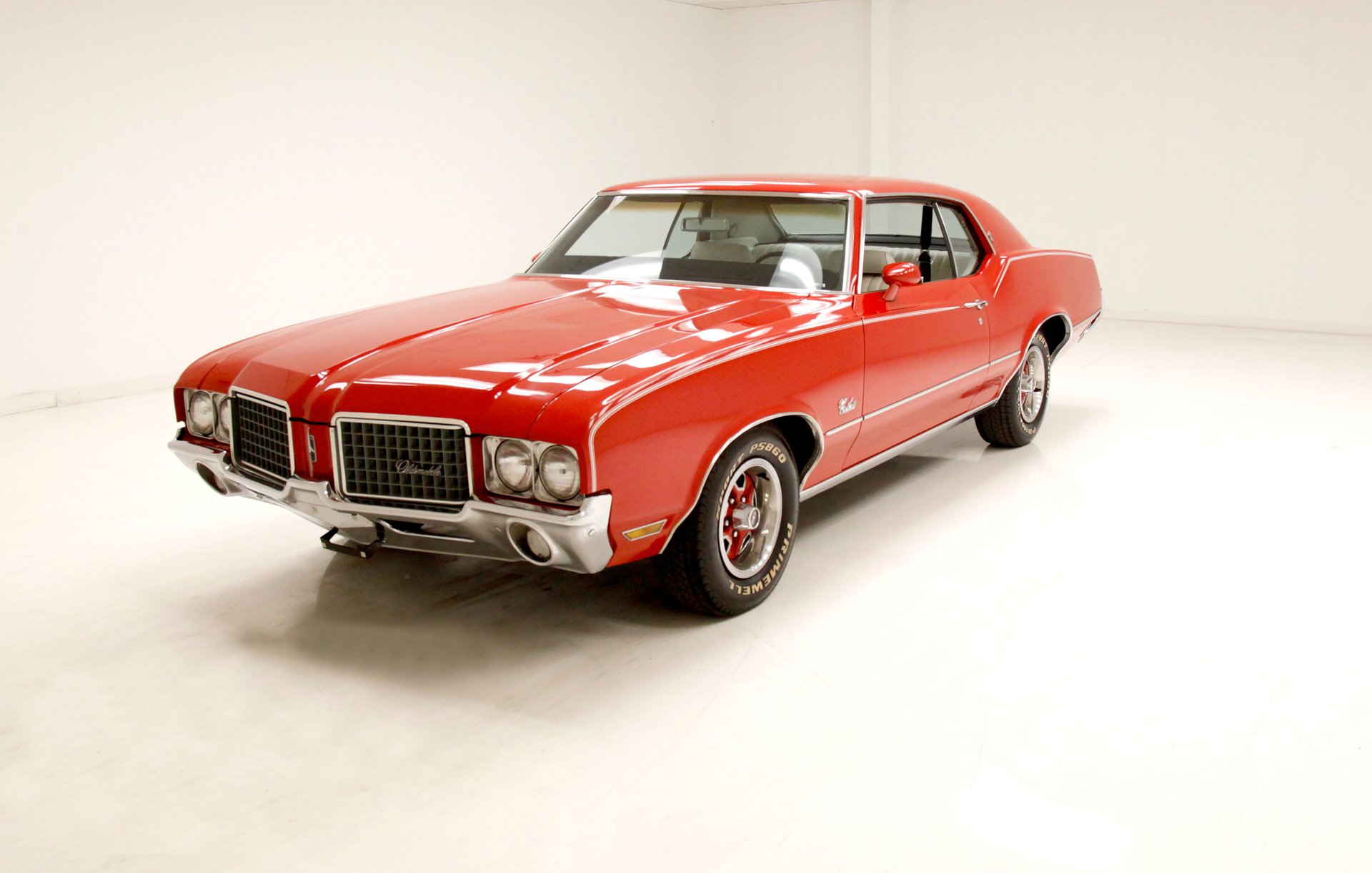 The Oldsmobile Cutlass is a line of automobiles produced by Oldsmobile between 1961 and 1988, and again briefly in 1997-1999. Over time the Cutlass name accumulated great brand equity, becoming not only Oldsmobile's best-selling model but one of the most popular nameplates in the industry in the 1970s. By the 1980s, Oldsmobile was using the Cutlass as a sub-marque, with numerous vehicle lines bearing the name simultaneously. These included the Cutlass Calais compact, the midsize Cutlass Ciera, the Cutlass Cruiser station wagon, and top of the line midsize Cutlass Supreme.

For consignment, probably the best year prior to the next generation changeover, this sleek sporty and nicely designed version, has undergone extensive refreshing from the consigner since his acquisition a few years ago. We give you a 1972 Oldsmobile Cutlass Supreme, numbers matching, and definitely adding some class and muscle at the same time to our showroom which includes extensive rooms and halls of the Classic Auto Mall, a real standout among others.

Exterior
Repainted in 2015 by its previous owner, attention to detail was paid on this car as it took on a fresh coating of Matador Red. Paint is the deep end of the pool, and it has painted on pinstriping. A perfectly aligned split grille and dual headlights with a pristine bumper below which continues the grille opening and houses round signal/running lights is below. Shiny trimmings show up all over this car and work in conjunction with the pinstripe to accentuate the forward moving form of this car. These include wheel well trim, rocker trim and window trimmings are all looking great. Steel panels are very straight, rust free and have well minded gaps. Bringing up the rear is a beautiful V formed rear bumper with a series of 6 square inset taillights on each side. New Firestone Raised white letter tires wrap 14 inch Oldsmobile Super Stock 2 wheels which have deep dish rings and body matching centers. “And now we see not just another pretty car.”

Interior
Opening the large well balanced doors we shake hands with a wonderful door panel on either side these have white vinyl surrounding an island of wood appliqué which houses the mirror toggle, and leather door pull. Just below are newly installed armrests which have the door actuator. A lineup of toggles is for the power windows, and just below a strip of black carpeting. Noted all new door and window weather stripping, plugs and door bumpers. Slipping inside we get behind the original wheel which fronts a very clean and original dash. This presents to us in black and is loaded with plenty of wood appliqué for the gauge cluster. A/C is now R134A and blows cold, Dakota Digital cruise control has been installed, and in front of the passenger we see a new glove box. All aligned perfectly. Fronting this dash is a wonderfully clean split back bench front seat which is tuck and roll white vinyl and has a central fold up and down armrest. The back has an equally beautiful and clean rear bench, and these all float in a sea of black flawless carpeting. A shout out to the trunk with its wonderful red carpeting red badged vinyl spare tire cover and pristine jack and stand. Sit back and turn on the new OPGI AM/FM/CD player and breathe in the 1972 design you are now surrounded by! “Nothing to watch but the road..”

Drivetrain
A pop of the hood which has new insulation on the underside and you will be in 350ci Rocket Engine gold painted heaven! There is a 2-barrel factory carb atop and a TH350 automatic transmission on back. And lest we forget it has a 10-bolt rear with a 2.73 gear ratio. An Igniter II electronic ignition with a Thruster II coil, new cap rotor and wires and if this does not spark your interest, move on! “The power of intelligent engineering.”

Undercarriage
I've had the pleasure of experiencing and writing about several of this consignor's cars, and even visited the wonderfully appointed barn where these cars reside. Temp controlled some up on jacks and all on battery tenders. I say this because the underside of this car shows the care it was given, and the environment in which it resided. Jet black surfaces all rust free, totally rebuilt entire brake system, power discs upfront and power drums for the rear. The car rides on independent coil sprung front suspension, and 4 link with coil springs in back.

Drive-Ability
As it looks, it performs and this car was a pleasure to drive and experience. All buttoned up and a quick warm up and I gently pushed the accelerator to the floor and took off with rocket like acceleration. Smooth shifting, bias free panic stopping and a comfy cruise without even breaking a sweat, probably due to the ice cold R134A AC! “In man's search for a new measure of excellence…”

What more can I say, other than just a beautiful example from 1972. I just took it off the showroom floor.