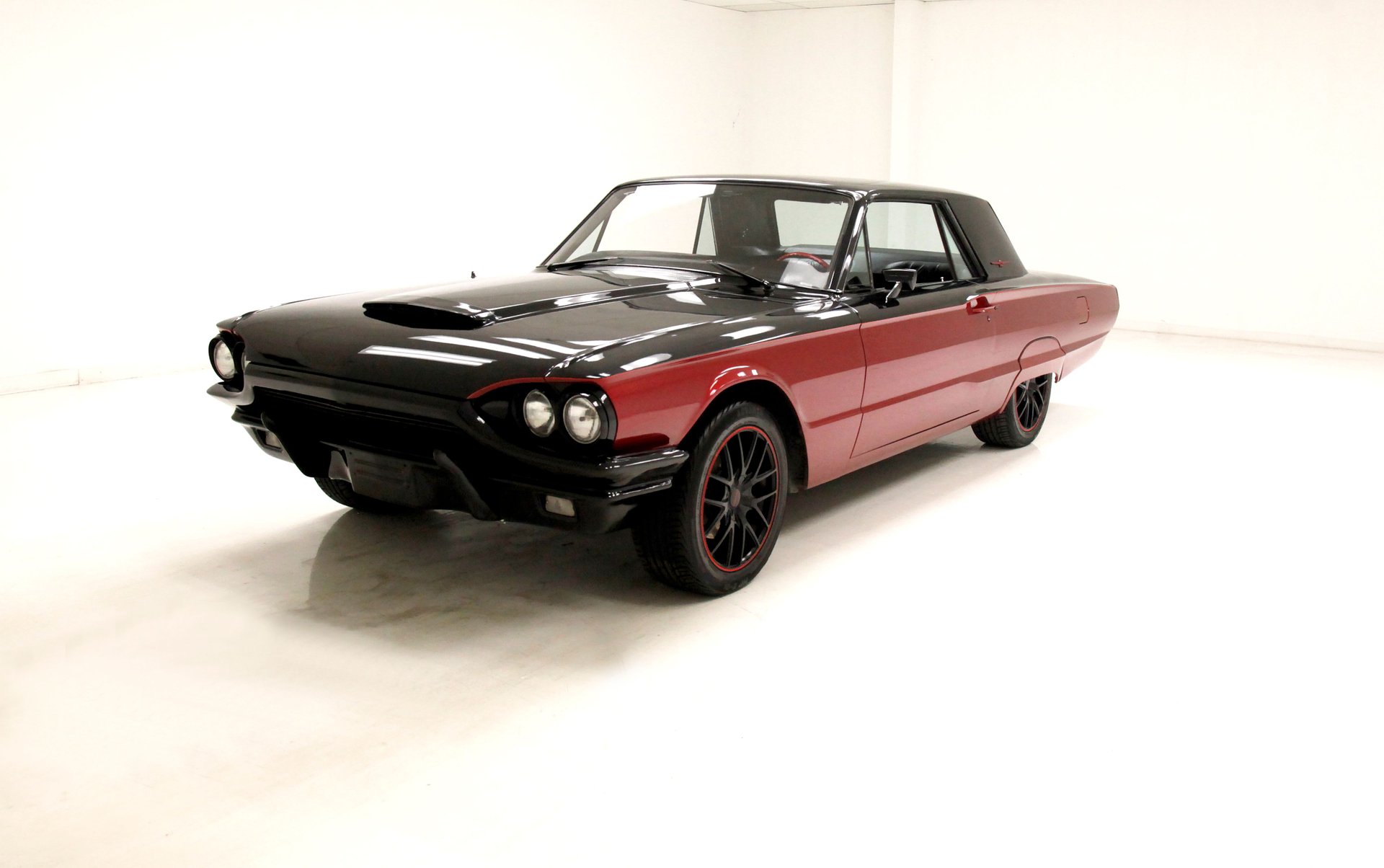 From all appearances, the 1964 Thunderbird was all new. But underneath it all, it really was the same old Bird. The drivetrain was essentially the same as 1963, and truthfully, there really wasn't much need to change anything. The Thunderbird 390ci Special V-8 combined with Ford's Cruise-O-Matic transmission were rock solid and dependable. With 300 horsepower under the hood, the T-bird was swift in flight, but not really the fastest car on the road. Despite this, the 390 moved the Bird with authority and was quick enough to make people take notice, should the driver desire to do so.

For consignment, a buttoned up bird with some fab mods to give us an even more teased version of the beehive hairdo right out of 1964. It retains all its stately suburban cruiser lines but is now a two tone resto mod-esque Thunderbird that now performs more like a hawk. Sporting a wild dash which is of the original design, and a snazzy interior we have a one of a kind rare looking bird. An “easter egg” if you will right here in our hallowed halls!

Exterior
Looks are what counts in this market, and for this 1964 it has them. The lines were more square, the features more chiseled, and the taillamps are bigger than ever before. Gone is the rounded, rocket ship theme which was replaced by something more reminiscent of the 1958-1960 Thunderbirds. In front, a massive bumper and grille with horizontal bars stretches from end to end and retains the same basic appearance and shape of the previous series. Two chrome, now painted black, bumper guards are mounted low near the center, with turn signal indicators mounted near each end. Dual headlights with red “eyebrows” and we have shades of the Batmobile. Above, a prominent hood scoop appeared about halfway back. All bezels are painted black as are window surrounds and other trimmings. On the sides we see black shiny paint covering the roofline to the sill line, hood, trunk and now the rectangular tail lamps, which cover more than half of the width of the shaved rear bumper. An inset between the lights spells out "THUNDERBIRD'' and chrome winged emblems are mounted in the center of each lens. Centered below each tail lamp is a back-up light with ribbed glass lenses. Fender skirts in red, along with sides of quarters and rockers are now all red. Snazzy black powder coated Touren 18-inch wheels with a small red trimming on the edge, are all wrapped with low profile all season radials.

Interior
The hits just keep on coming as we swing the doors which are now all in menacing black, even the cranks and actuator. Black is also covering the beautiful leather bomber styled buckets in front and bench in the back. The backs of all these smooth seats are embroidered with a tulip-like flourish pattern adding just a bit of extra customization. A peppering of red is noted on the dash front for the futuristic rolling linear bar speedo, and lineup of gauges in the eyeball style just below. A red steering wheel now fronts this futuristic yet all original design. Red stripes also race rearward on the console top, which has a nice padded top to the long glovebox at the buckets. Eyeball vents are all over this dash, however they are for the famous airflow these birds were known for, so it does NOT have AC. Black carpeting floods the floor and above a tight black headliner is looking down on this futuristic interior. Welcome to the 21st Century Buck!

Drivetrain
A pop of the scooped hood and a 4.6 liter SOHC V8 with EFI is now in. Also, on back is a newer 4R70W 4-speed automatic which throws plenty of power rearward to a Ford 9-inch 3.00 rear axle. Everything is looking good under this hood!

Undercarriage
Underneath shows some surface rust, a light overall patina has aged the panels and unibody well. No invasive rust or problems to be seen under here, just independent front suspension, and leaf spring rear suspension. Power disc brakes for the front, and power drums for the rear.

Drive-Ability
A quick fire up and we flew off to the test track. Here it was a pleasure to drive, and a head turner. Plenty of EFI power for the 4.6 liter and it shifts through the gears like a dream. All instrumentation and functions were top flite, and you feel like you are back to the future with the styling. We do note that the transmission slips a little in reverse and there are no windshield wipers.

And here's some trivia for you: Ford had originally planned on debuting the sequential rear turn signals for the 1964 model year but had to delay it for a year because the new sequential turn signal flashing sequence had to be voted into motor vehicle laws in all states before the cars could legally be driven in them. And, typical of the government, there were a few states that still hadn't made it legal when the time came to start building the 1964 models! This custom “job” is truly unique and uses the futuristic styling to its full advantage.