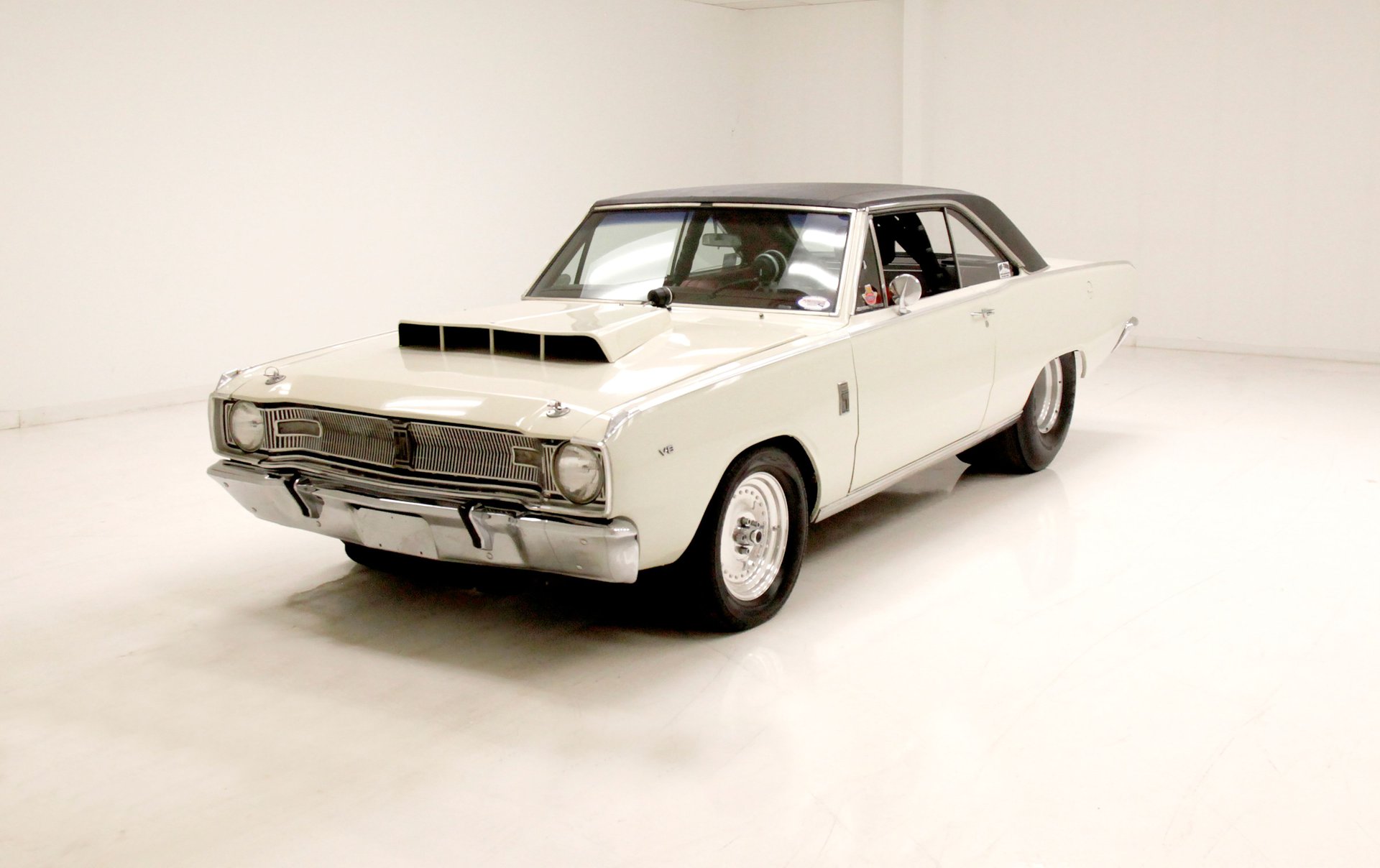 The Dodge Dart is a line of automobiles marketed by Dodge from the 1959 to 1976 model years in North America, with production extended to later years in various other markets. The Dart name originally appeared on a 1956 Chrysler show car featuring a streamlined body designed by the Italian coachbuilder Carrozzeria Ghia that was later modified and renamed the Dart Diablo. The production Dart was introduced as a lower-priced, full-size Dodge in 1960 and 1961, became a mid-size car for 1962, and then was a compact from 1963 to 1976.

A funny thing happened on the way after purchasing this mild-mannered original grocery getter Dart for his wife in the early 1980's. The consigner wanted to race it, so he made a deal with his wife, (details unknown), and put a 340ci mill in it, a Dana 60 rear, and an A727 Torqueflite transmission in, and it was off to the races. This version lasted 15 years. At which time our consigner became restless and put an even bigger big block 440ci V8 and back halved the car with a 4 link setup. After another 15 years our man decided to slow it down a bit, but still had an interest in street racing so we give you this 1967 Dart GT street racing version, which you'll have to read on for all the juicy details.

Exterior
This restyled Dart for 1967 features a rear window with compound inverse curves. This creates a unique appearance at the rear of the greenhouse, but this design tended to collect snow and created thick C-pillars that looked formal but created blind spots for drivers. Curved side glass was used for the first time on a Chrysler compact. The front featured a new dual-plane front end contour: the center section of the grille, bumper, and leading edge of the hood were recessed from the front plane of the car. The single headlamps were placed forward of the recessed center section, defining the front plane. Park/turn lamps were set into the grille, in the corners formed by the transition area between the recessed and forward sections. Our version has a large scooped and pinned hood with a front cowl mounted gauge just outside the front glass in the canter. All straight rust-free steel is bathed in white, (WW1), and there is a nicely preserved black vinyl top with plenty of chromed trimmings around the glass. Bringing up the rear is a flat vertical roll panel with angled taillights, a horizontal ribbed aluminum trimming stretching between the lights, and a shiny rear bumper below. 15 inch Centerline wheels are wrapped in front with 195/65R15's , and in back with 32x17.5-15 Pro Street M/T's.

Interior
In contrasting red to the exterior white low back 5 point racing belted buckets are shoehorned into the front and a roll cage is welded in. For easy access, the driver's side swings away from its mounting and goes with the door. Speaking of which has red metal sills and horizontal ribbed vinyl inserts. The original dash is in, but a wood rimmed rally steering wheel has been added as well as a tower mounted shift light tachometer in top dead center of the column. Also mounted to the side is a Computech EGT Plus exhaust temp and RPM monitor in digital form. A few other aftermarket gauges have been mounted into a wood piece below the dash along with a VAC gauge to the wood panels right. Red carpeting floods the floors and floating in the center hump is a competition automatic shifter. Also on the hump is a Painless Wiring toggle box for controlling the lights, water pump, and fuel pump as well as other electronics. Because of the car being back halved there is no rear seat, just welded aluminum with the roll cage in front. Above is a nice tight red headliner. Noted in the trunk is now a fuel cell and battery box with an exterior shutoff.

Drivetrain
Under the hood is the pre described 440ci V8 but it's been calmed down to race in the street class at Maple Grove. This mill is the 3rd iteration mounted under this hood and it is ca. 1966-72. There is a single 4-barrel carb on top, carbon fiber valve coverings, satin silver Mopar intake manifold, MSD ignition, red painted block and stainless braided hoses. An aluminum radiator keeps everything cool in this fully restored engine bay in satin black. On back is an A727 Torqueflite transmission with a reverse valve body, and the Dana 60 rear of yore. Headers and a Flowmaster exhaust allow for the big exhale.

Undercarriage
The back ended car is modified to accommodate the large rear tires and Dana 60. It shows with ladder bars and coil overs. The remainder of the undercarriage is rust free original steel, and braking is disk in front and drums for the rear.

Drive-Ability
This machine lights right up and is ready to go with a short warmup. Our racing expert took it out and reported all was very good on the performance end as well as the functionality front. No complaints and a simple thumbs up upon his exit.

The racing bug hit this consigner and the car's engine and build history reflects that, but now is a usable street legal racer. All buttoned up and in 1967 White Hat boy's form. Drop the hanky!!