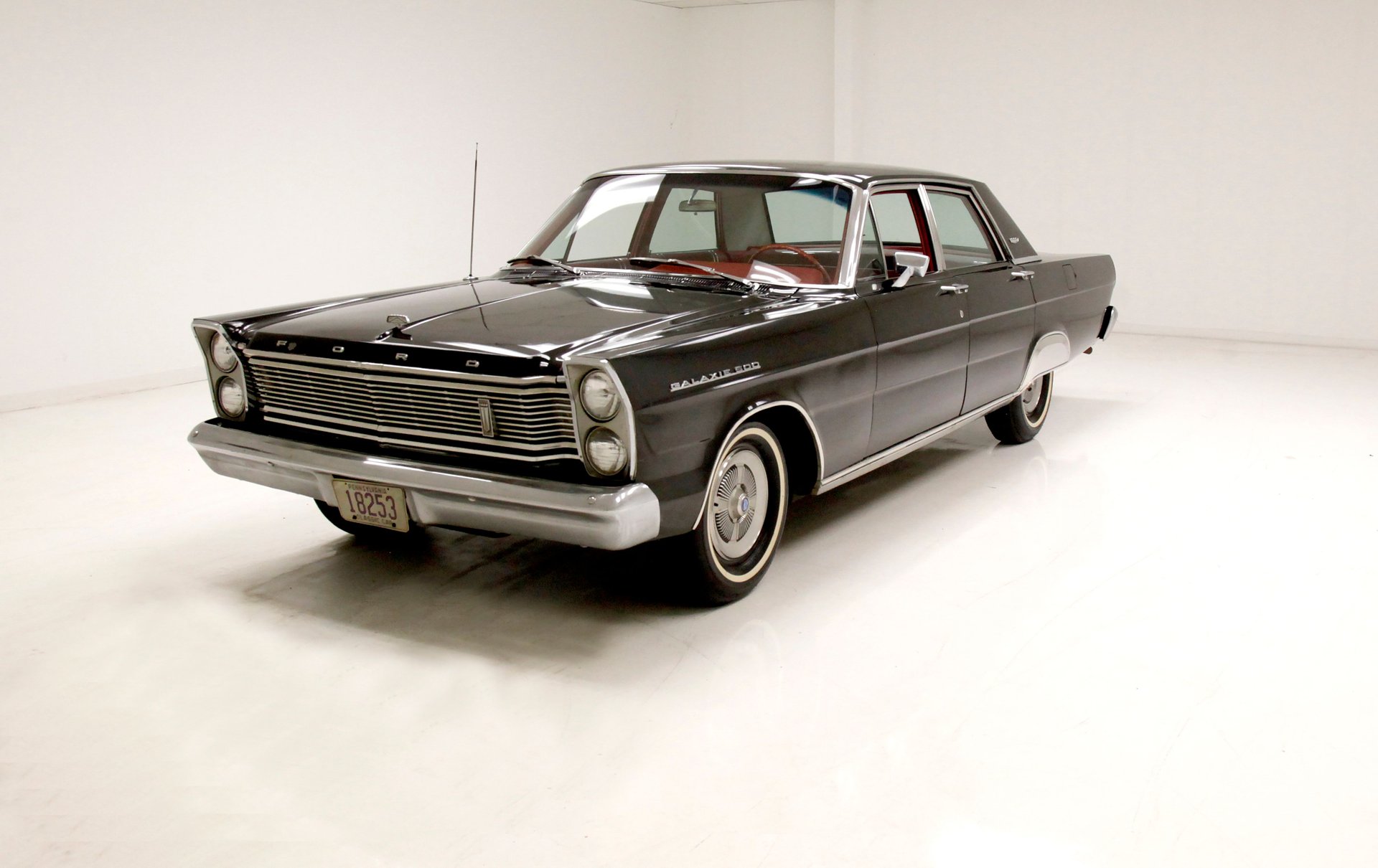 For those of you who used their formative years to educate and mostly entertain themselves with the boob tube, you probably catching an episode or two of Andy of Mayberry. A number of awesome cars were featured in the Andy Griffith Show over its nine year run, but Griffith's squad cars were always Ford Galaxie 500 sedans. Fords were increasingly featured as the show reached its later years, undoubtedly because of a sponsorship from the Ford Motor Company.

For consignment a 1965 Galaxie 500 that I would classify as a survivor. While our consigner was dating the apple of his eye in high school, there was a car in the girlfriend's neighbors back yard that also caught our consigner's eye, that being this very 1965 Ford Galaxie 500. Of course, he approached the elderly man who did not want to sell so our consigner moved forward with his second favorite car, a Ford Mustang. Time passed, and his girlfriend became his wife, and was unfortunately involved in an accident with the Mustang. As fate would have it, the old boy across the street was ready to sell the Galaxie, and so began a 40-year labor of love to bring the Galaxie back to shooting star status. Read on for the efforts put forth to have this super low original mileage, buttoned up as needed car which can now be classified as a survivor.

Exterior
Raven Black, in a respray covers straight steel panels, and 4 doors with well minded gaps. Paint has slightly dulled and has some battle scars in the form of scratches and a few dents. The rear wheels sport shiny polished stainless fender skirts, which adds some nice highlighting to this black. Side panels are highlighted by a mid car straight trim spear that begins at the headlights and runs straight to the stern as it thins to an arrow point at the rear quarter. Galaxie 500 is badged just behind the dual front stacked headlights within a well preserved egg crate grille and has a nice badge in the center. The front bumper is very nice and shiny. As we move to the rear, we find squared off taillights with a center round backup light and some starburst trimmings reaching out to each side in shiny chromed points. More shiny trimmings for the rear on the trunk, and just below is a nicely preserved rear bumper. Not to be forgotten is the roof in body matching black. Thin whites wrap standard turbine styled wheel coverings with a blue cloisonné hub and white Ford badge.


Interior
With a swing of any of the 4 doors we greet several yards of red broadcloth and vinyl covered seats and door panels. All newly covered, in plastic wrappings as they were since this car was bought back in 1965 and all in great clear condition for the plastic. Within the door panels which are all vinyl, reside the door actuator, armrest/pulls, and window cranks which are nearly pristine. The front split bench is made up of red striped tuck and roll inserts and smooth red vinyl bolsters and some red piping racing around the border of the two. The rear bench copies this style. A very clean and shiny original dash looking like it was pulled from the Millennium Falcon with its central white numbers on black horizontal shaped background is flanked by the arrow turn signal indicators on either side. The original steering wheel is noted. Red carpet floods the floors A nice white headliner, good and tight floats above their stunning red interior with seats that may never have been sat on without plastic coverings! Bringing our attention briefly to the trunk it has its original speckled spray liner and a spare, and jack neatly tucked away in the front of the trunk.

Drivetrain
Clean original with some nice patina is seen on the surfaces under the hood, including the 289ci V8 which pumps out a consigner stated 200 horses. This is complete with gold painted valve covers and a single 2-barrel carb with a gold painted single snout air cleaner cover atop. A 3-speed manual with overdrive transmission makes this an original 3 on the tree. Way back is a 9-inch 3.50 conventional axle.

Undercarriage
Some surface rust for the usual suspects, but the car maintains structural integrity with a slightly surface rusted frame and floor pans. Independent coil springs for the front, and a 4-link system with coil springs for the rear suspension, as well as drum brakes are all around. A stock style single exhaust is noted and rust free style shows nicely.

Drive-Ability
As expected from a car in this condition, she fired right up, and with a light lifting of my clutch foot, took off smoothly. This car is a great large cruiser, smooth ride, and no creaking or squeaking when turning the corners. Drives like a mechanically well-maintained survivor. Only the clock would not tell time, but A/C blows nice and cold thanks to a R134a upgrade, and all other functions are working perfectly.

With just a few frowns on the exterior bodywork, the paint remains good and a bit dulled, chrome is all good, and a few special parts have been re-plated. Not the most powerful or unusual optioned car, but very respectable in overall presentation with a snappy interior. Meet George Jetson….Jane his wife… daughter Judy…well you get it! Now cue the whistling and grab your fishing pole! (Gosh wasn't TV great back then?!) Just like this consignment and a great story to boot!