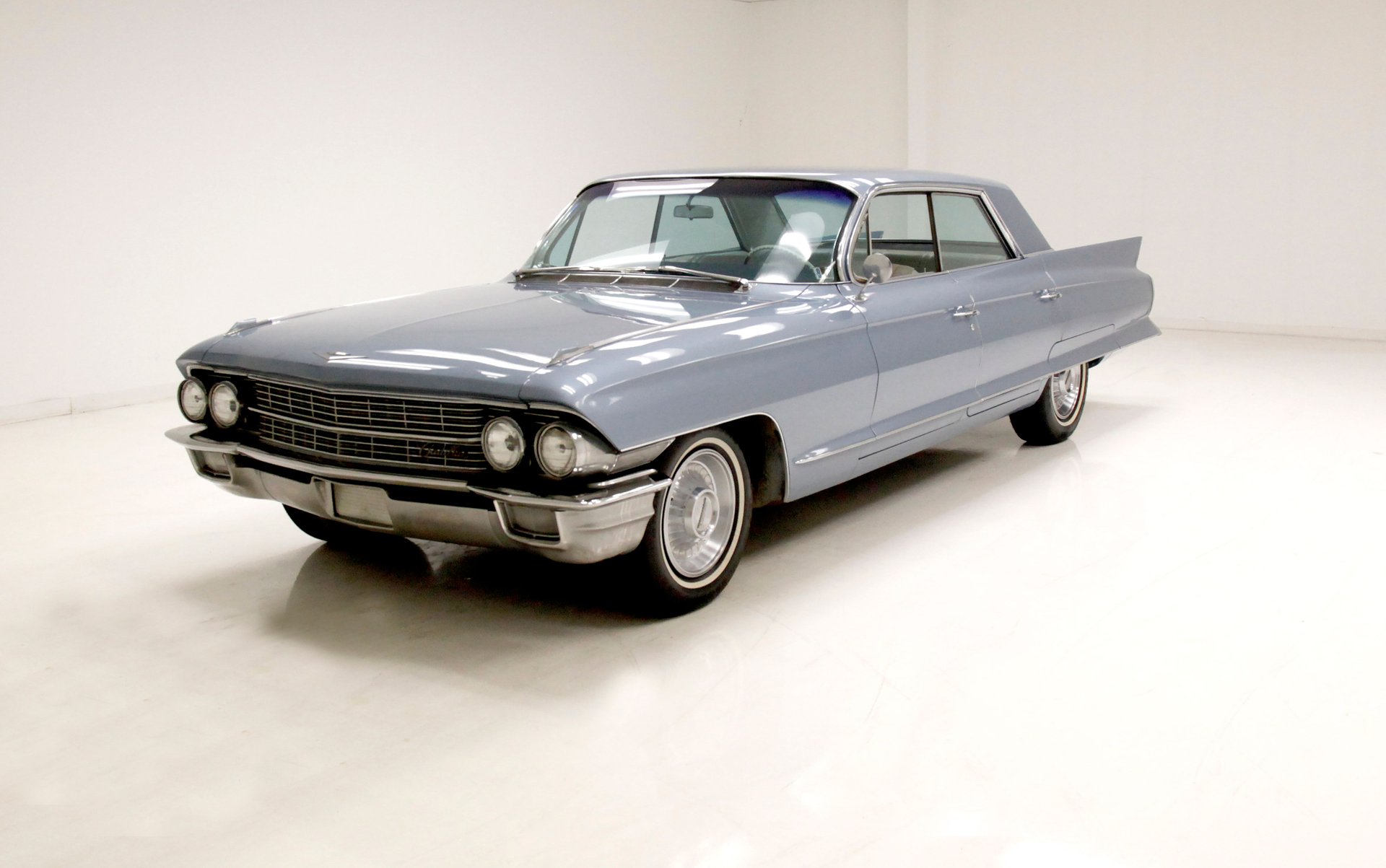 The 1961-63 Lincoln Continental is commonly viewed as the first downsized American luxury car. However, during this same time period Cadillac also offered a more compact variant that has received little attention. In a way that's understandable. Cadillac took a much less ambitious approach than Lincoln. Whereas the Continental was given a brand-new platform, Cadillac merely cut seven inches from the deck of its Sixty-Two series four-door hardtop. The result wasn't all that noticeable because nothing else about the car was changed, including the wheelbase.

Hello Americans, and for consignment we give you this driveway dinosaur slightly shortened rear deck 4 door version in Park Avenue in somewhat rare form. Looking dapper in Newport Blue Metallic, was originally owned by a Philly main line well-heeled wife of a noted landscape equipment manufacturer named Asplundh. She lovingly used it until our consigner's father swooped in the day she traded it in, and purchased this long (shortened!) liner. Enjoyed by the father, it was then stored in a barn, awaiting the son's 18th birthday. At this time, it was exhumed from its barn storage and full frame on restoration was started. And now, the REST of the story….

Exterior
Straight and large steel panels all rust free, are adorning this exterior. This mixes with re-chromed trimmings, fender skirts and some futuristic small fins flanking the shortened rear deck. A curved “bubble style” sun ray glass windshield is on, and large chromed bezeled dual headlights lead the way. The rear bumper is nothing short of fabulous and had a rectangular large chrome bezel on either side housing the backup lights. Badging is all looking great and correct, and on all 4 corners are beautifully polished wheel coverings wrapped by thin white rubber. Page two….

Interior
In true Cadillac style white leather adorns the front split back cushy bench seat. It is showing some wear with cracking, exposed foam, and dirt and smudging on the tubs and throughout the seats. The rear bench has seen much less use and retains its original look and charm. 4 large beautifully covered in white leather door panels use some chrome trimming as accenting, and stainless steel for the foregrounds of the armrests where the door actuators reside, along with power seats, windows, and a rear view side mirror adjuster. The driver's panel shows some dirt and wear, and others are still in good condition. The original dash, showing some wear and paint chip off is fronted by a thin exquisitely fashioned 2 tone black and white and chromed steering wheel. Black carpeting is covering the floors, and above is a tightey whitey headliner in vinyl. Stand by for news…on the drivetrain!

Drivetrain
Our consigner states that over 40K has been spent on mechanicals including the engine which has been completely rebuilt. It now sports an overbore 390ci V8, a 4-barrel Rochester carburetor, and a 4-speed Hydramatic automatic transmission. New fuel lines were installed at this time. Overall patina and plenty of dust covers this engine. There are times like these, where it helps to recall there have always been times like these…

Undercarriage
Plenty of heavy surface rust is noted on the undercarriage, framing, and rear axle, and other parts. Newer coil springs and shocks and brake lines have been put on, and along with engine, consigner states that less than 500 miles have been clocked since work was performed. Floor pans are still solid and black, and exhaust is hole free but surface rusted. Power drum brakes are on all 4 corners.

Drive-Ability
These caddies are always a blast to drive, and this one did not disappoint on the test track where it performed nicely. It lumbers around turns, has bias free braking and nice acceleration. The radio was inoperable, as were the wipers.

Golf is a game where you yell “fore!' shoot 6 and put down 5, and Main Line money never seems to dry up. That's why cars like this exist in their large and in charge form, but dedicated to the society ladies or high rise dowager garage parkers with its shorter overall length, and slightly easier maneuverability. This one needs some TLC but has a great history, as who in South Central and Eastern PA has not seen an orange Asplundh shredder on a tree takedown? This is Peter, your writer….Good Day!