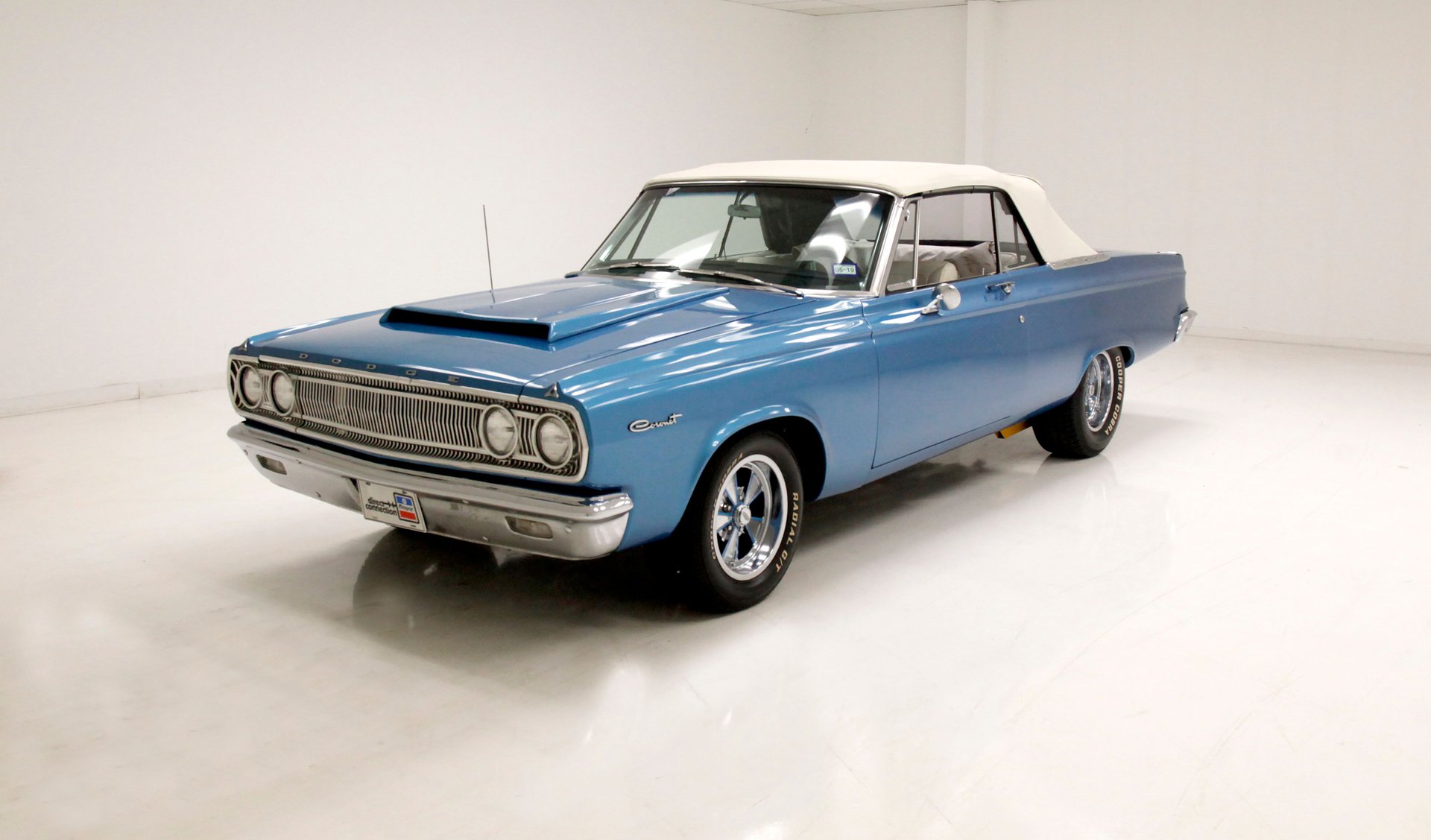 The Coronet was produced by Dodge in seven generations, first introduced in 1949. It was the division's highest trim line model but moved to the lowest level from 1955 through 1959. The name was reintroduced on intermediate sized models from the 1965 to 1976 model years. Muscle car options were available starting in 1965 with the 440ci V8, followed by the 426ci V8 Hemi in 1966. For 1965, Dodge sold over 209,000 units, making the Coronet the most popular Dodge model that year. Trim levels were many and included a Deluxe version, Coronet 440, and Coronet 500.

For consignment and offered to you, a Coronet 500 Convertible that has been restored, modified and enjoyed. The option for little or copious amounts of wind in your hair, or lack thereof in my case, is at the flick of a switch. A Super Stock style hood scoop and some snappy chrome wheels make this boulevard cruiser not only a looker but a cooker!

Exterior
Very few faults are seen in the respray of Medium Metallic Blue and it presents in the deep end of the pool. Brightwork and badging is all very nice and compliments the paint perfectly. An electric shaver style grill takes up the whole front end and holds within the dual headlights per side. A nice chrome bumper with integrated marker lights is mounted below. A Super Stock style scoop resides on top of the hood to provide a menacing street racer look. A good condition white canvas power top sits above with a plastic rear window and has a few minor flaws in the canvas that keep it from the perfect end of the spectrum. A pair of chrome Fratzog trim pieces sit atop the rear quarters and just below are chrome bezel tail lights. Chrome with blue highlighted 5-spoke Cragar wheels fill the wheel wells and are wrapped in raised white letter rubber.

Interior
A deviation from the factory black interior, we are met with white vinyl bucket seats that have a tuck and roll pattern in the center. A rear bench sprawls panel to panel and carries the same pattern. Black carpeting covers the floors and shows very nicely with black carpeted mats for a dose of protection. A very jet fighteresque console runs between the buckets and has a shifter that resembles a jet throttle control rises from the middle. Don't look away or you'll miss the console mounted factory tachometer. A thick rimmed 3-spoke steering wheel fronts an original style dashboard with a large rectangular speedometer and a small round clock sits to the right. The factory AM Musicmaster radio resides within the dash and a soft dash pad is on top. The door panels are a mixture of white vinyl, black carpet, silver padded inserts and chrome knobs and handles with the white showing some soiling. A Coronet 500 badge sits in the center of the panel to remind you of your ride.

Drivetrain
Lifting the scooped hood, we see the original 318ci Polyspherical V8. It has been bored .030 over, had a performance Street Grind camshaft installed and is topped with a pair of Edelbrock 4bbl carburetors for extra wow factor. A built 727 Torqueflite 3-speed automatic transmission, now built to handle 500hp with a shift kit installed and is spun by a 2500 rpm stall converter is bolted to this potent mill. An 8 3/4" 3.23 geared SureGrip rear axle is in the back to spin the tires when you get heavy with the right foot.

Undercarriage
All clean, rust free and showing the results of a quality restoration down below. A solid black unibody and floor pans have only minor road dirt and minimal surface rust is only seen on a few of the suspension components. Speaking of the suspension, we have an independent front end with torsion bars and on the back, we have leaf springs with tractions bars. Ceramic coated headers expel spent fossils via a rust free exhaust system. Power disc brakes are on the front and power drums are on the rear. Noted is a new appearing fuel tank.

Drivability
I chose top down for my ride and boy does the top move smoothly. The white vinyl buckets provided good support as I put this drop top Mopar missile through the paces on the patented Classic Auto Mall test track. Power was plentiful thanks to the dual quad setup, braking was better than the factory ever provided, and handling was spot on.

A drop top version of Mopar Muscle with many tasteful upgrades. A great driver and even better looker with the blue on white on white combo. Gettaloadathat!