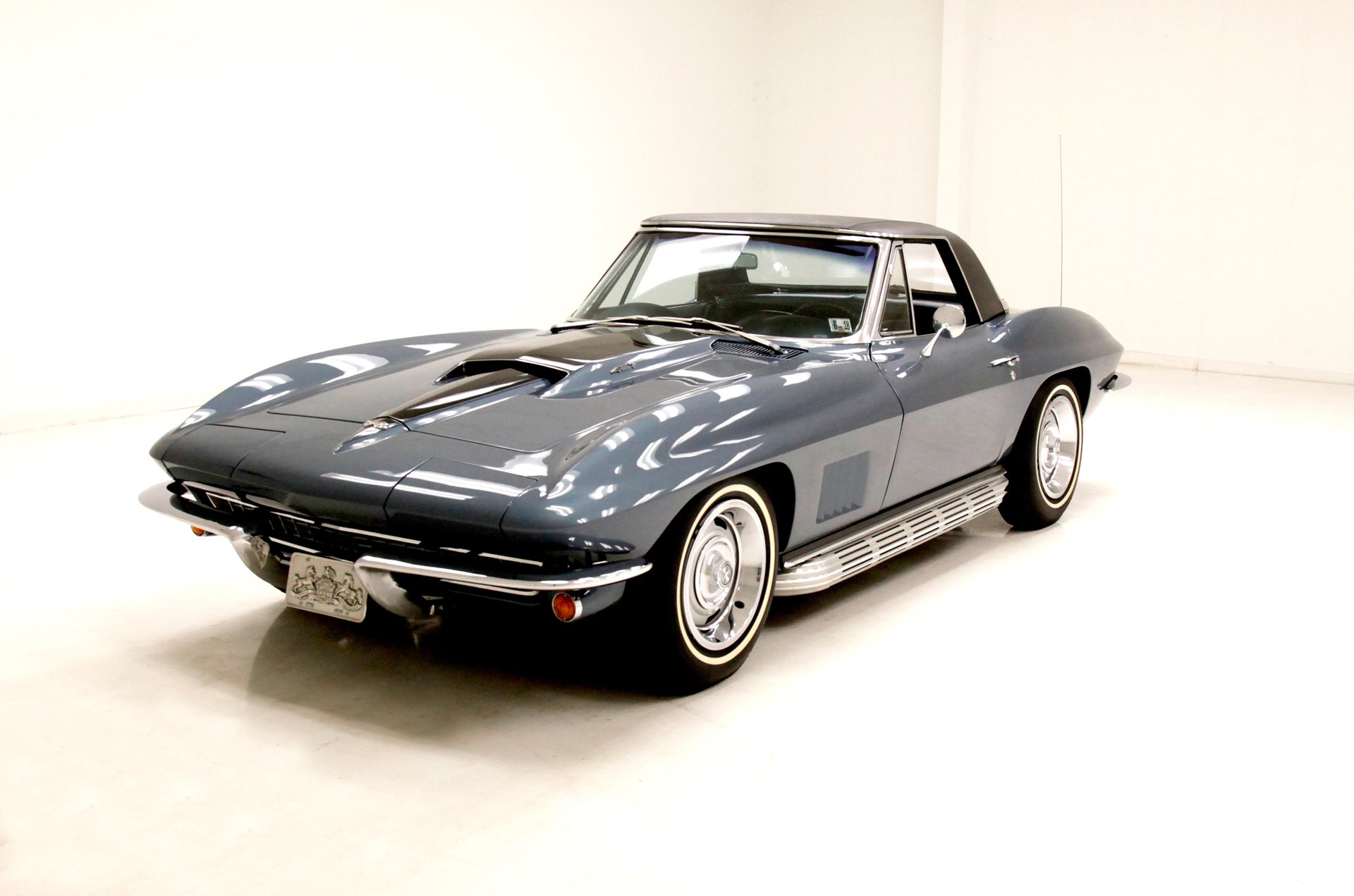 DID YOU KNOW: Dick Guldstrand, Bob Bondurant, and Dick Yenko took a 1967 Corvette coupe with an L-88 427 ci engine to the 24 Hours of Le Mans. Dick Guldstrand set a new record speed of 171.5 mph on the Mulsanne straight. In the 13th hour, the engine failed, ending the race for the lone Corvette. While this bit of history is significant, what makes it all the more interesting is the backstory that goes with it. Because Guldstrand and Bondurant had arrived late in France and risked missing qualifying at the track, they instead decided to drive the L88 big-block Corvette racer from the airport near Paris directly to Le Mans for the 24-hour race – a drive that normally takes more than two hours to complete during normal driving conditions. This transcended the drivers – and the 1967 L88 Chevy Corvette – into “folk heroes” among the locals of La Sarthe, France.

For consignment, a car that will make the hair on a Corvette aficionado's neck stand up. An L-71 Corvette, 427ci from 1967. This is a 1, listen close, ONE owner car, and has seen 1 repaint around 20 years ago due to 5 or 6 cracks in the original lacquer paint. This car has never been shown and never been judged so it's an open palette for the new owner. Every number is matching, and it is as clean as they come. Low original miles with a mere 22,461 clocked since 1967! Bought new at Klick Lewis Chevrolet in Palmyra, Pennsylvania when the owner was a mere 20 years old, (meaning this beast had to be registered in his parents name until he was 21), and lovingly cared for over the years. This car is designated for the main showroom, and will have velvet ropes strung around it, but is definitely here for the taking, and looking but please no touching!

Exterior
The pointy shark-like lines of this beautiful body are just well aligned and bathed in Lynndale Blue. A stinger hood with a black paint to highlight it is seen on the hood which rests comfortably between the front hidden headlight portion and the creased rounded front quarter tops. Another “crimp” if you will, is seen on the sides running through the tops of the flattened wheel wells, through the doors and on to the round topped rear quarters making the straight line extend through the rear wheel well. Shiny perfect split bumpers are in front and back and a chromed bezeled round turn signal light is below. Side pipes with factory ribbed and punched guards hang from either rocker and floating just above on the front quarter are some “gills” for venting the engine. A nicely trimmed front windshield supports a black vinyl hardtop which is removable, as this car is also a convertible! Before we get into that though a shout to the rear glass on the hardtop, it's a wraparound. The convertible top is in excellent condition with just a slight tear at the seam on the bottom middle where the plastic meets the canvas but hey, its original! This top shows in black and has a fairly clear plastic rear window. More pointed look for the rear deck with dual round tail lighting on either side and more split bumpers below. 15-inch rally wheels are all around and shine to the fullest.

Interior
Black vinyl covers the door panels and there is plenty of chrome to go around here too with the round knob door actuator, chromed pull bar and wing and main window cranks. Inside, perfectly presenting black bomber style buckets with low curved backs and covered in black vinyl frame the back of the driver's compartment. In front is the dual curved eyebrow dash, with the driver's side sporting the gauge cluster containing all round gauges and some pulls with a black textured panel surrounding within the eyebrow. On the passenger's side is another eyebrow, this time housing the arched top glove box with brushed aluminum door. In the center the dash falls gracefully downward and in this area, we note the vertically mounted Delco AM/FM radio, several climate control knobs and a large chronograph clock in the center of this mid section. The console has the handbrake, a small storage glovebox and the metal chromed round knobbed gear shifter. Black carpeting floods the floors and has protective carpeted Corvette badged floor mats. In back of the buckets is another small black carpeted storage area.

Undercarriage
Absolute showroom, no rust, just perfectly preserved or restored surfaces, black steel, silver cast suspension parts no corrosion, and a brushed stainless spare tire structure in back. In front independent coil springs, and on back, IRS with frame mounted differential unit, double universal jointed tubular axles, and transverse multi leaf springs. Disc brakes are mounted all around, and the exhaust goes to either side for the exhale.

Drive-Ability
It fired right up and ran swimmingly. We did not have it out long as it is such low mileage we were reluctant to clock more on. When we did drive though it was near perfection.

Plenty of WOW factor here with a near perfect example of a 1967 427-L71-V8 Hardtop And Convertible. Everywhere you look is just showroom including the mileage which is definitely original! All the right stuff in one package.