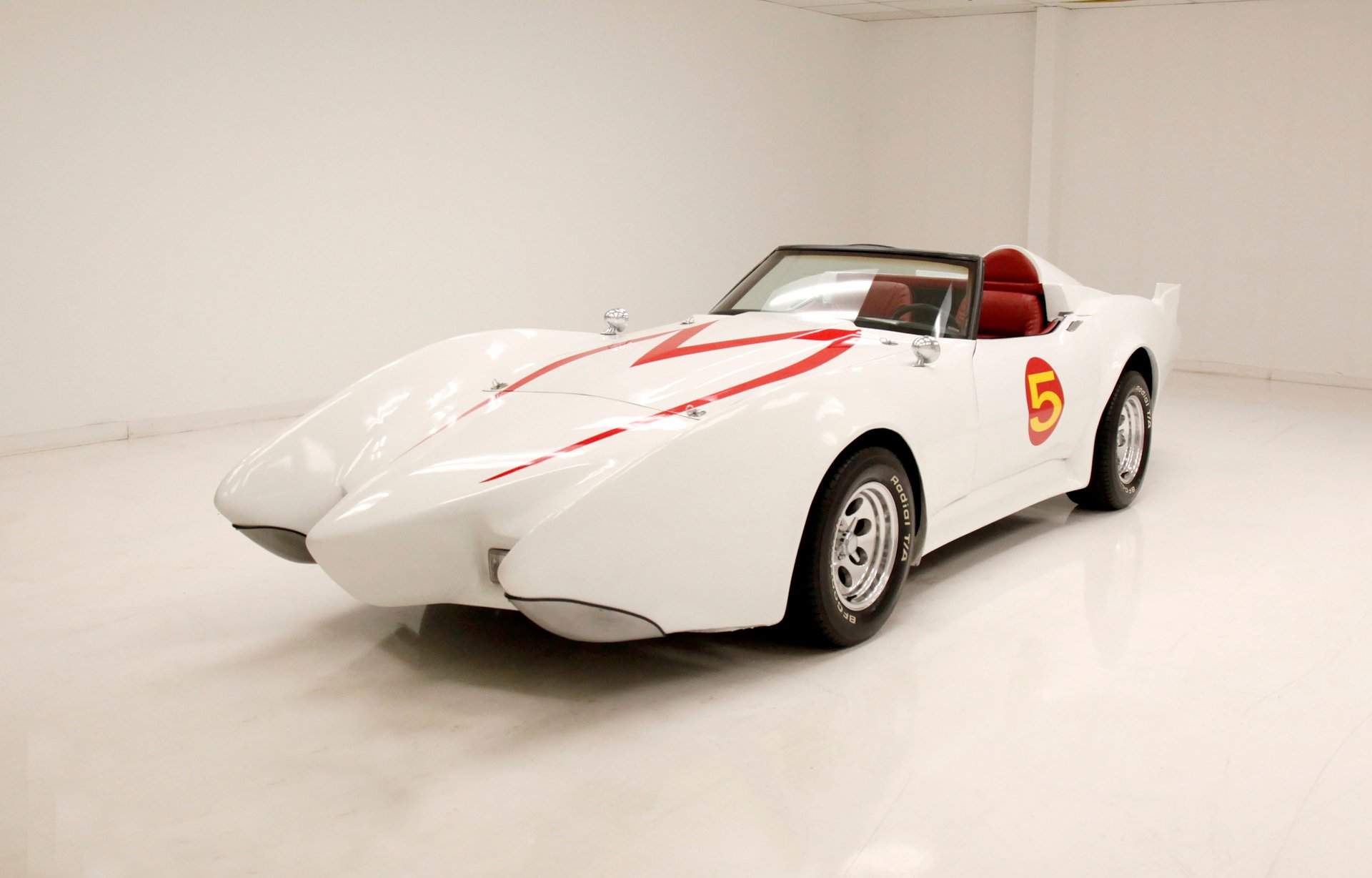 The large red M on the hood of the Mach 5, as well as on Go's helmet, is the emblem of Mifune Motors, the family business, and an homage to Japanese film star Toshiro Mifune. In North America it was assumed to stand for Mach 5 and in the Latin American version for Meteoro. Speed's full name was Go Mifune, in homage to Japanese film star Toshiro Mifune. His name, Americanized, became Speed Racer. His adventures centered on his powerful Mach 5 car, his girlfriend Trixie, his little brother Spritle, Spritle's pet chimpanzee Chim-Chim, and his mysterious older brother, Racer X, whose real name was Rex Racer.

What does one do when they have a bunch of extra fiberglass laying around and plenty of time on their hands? Well, they take a 1979 Corvette chassis, and some of the original body panels and they create the iconic Mach 5 driven by none other than Speed Racer. This fab fabrication presents as one of a kind, and we hear at Classic Auto Mall can most assuredly guarantee you'll be the ONLY one on your block to have one!

Exterior
Gone are the hidden headlights of the original 1979 version, now replaced with a trio of sculpted pods, (pontoon like), that come to create 3 nicely rounded points, the outer two housing stainless covered pointed to the ground aero coverings. In the center is the original Corvette hood, but now the 3rd centered “pontoon” reaches out to meet the two flanking fenders if you will. Rectangular headlights are squeezed in between the outer can central pontoon and are no longer hidden. A red M is painted on the hood which is stylized to fit onto the pontoon in the center. The back of the front fenders appear much like the original 79 versions and the doors and rockers are believed to be pretty much original '79 design as well. The back of the car is also an artistic expression on steroids with the driver's cowl bump up, and more pods for the rear of this racer. The taillights appear suspiciously as 1963 Caddy tail lights, and the rear roll pan has been modified for a more aero look. Red Speed Racer badging and a stainless-steel round gas filler covering is seen on the trunk lid. 15-inch polished drilled wheels are on all 4 corners and are wrapped by raised white lettered BFG tires. Noted on the doors a round circle in red with the number 5 in the center in yellow. This denoted the Mach 5 and also pays homage to the Japanese flag.

Interior
Deep red vinyl covers the interior, and the high back buckets are dressed similarly to the Michelin man with their puffy bolsters, lumbar supports integrated headrests. Door panels are also in red sporting vinyl uppers and red carpet lowers and compliment the buckets. These show slight wear on the plastic surrounding the door levers. A matching padded red vinyl topper for the dash with a black insert front, houses the gauge clusters. On the center climb from the console we note the radio is missing. A center console, flanked by the bucket seats, is in nicely molded black plastic, and houses the shifter and temp sliders. Clean deep red carpeting is seen on the floors and cargo space uses black carpeting, and all shows in good condition.

Drivetrain
Under what is now a pinned hood, is a beauty of an engine in 350ci L48 V8 form. It is highly polished on the top end and has an aftermarket open hole chromed air cleaner covering. A shiny Edelbrock intake manifold and carburetor of 4-barrel designation are noted on top. On the back is a TH350 3-speed automatic transmission. The rear axle is 3.55 ratio. Underneath all the polished machined top end is an orange/red painted GM block and all bolt ons are like new with no corrosion, supple rubber hoses and wiring in yellow.

Undercarriage
Save for the elongated body pontoons its standard '79 Vette fare underneath. Slight spotty surface rust, and solid steel framing. C3 Corvette suspension is on along with power disc brakes on all 4 corners as is power steering. Dual exhaust snake rearward, however, the driver's side is missing a muffler of Cherrybomb designation.

Drive-Ability
Suit up Chim Chim we are going on an adventure! Off to the test track where it performed like a …1979 Corvette! Smooth acceleration and shifting, and bias free panic stopping.

Certainly one of a kind making extensive use of creative license and morphing a 1979 Vette into the Mach 5 of Japanese Anime groundbreaking cartoon fame, now reality, and could be in your driveway. Go Speed Racer…GO!